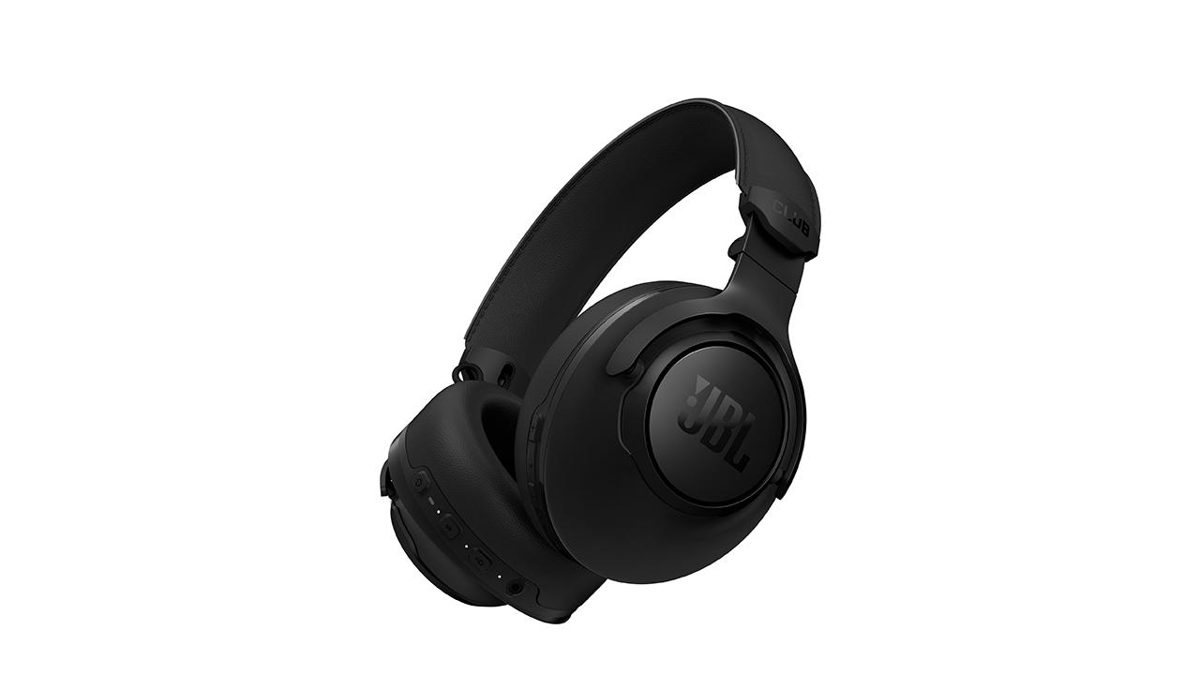 JBL is no stranger to the realm of bass-boosted headphones, but is trying its hand at something a bit different with the Club One, pairing natural-sounding lows with sculpted highs. The headphones also feature active noise cancellation (ANC) and come with an array of useful accessories. But at $349.95, the Club One can’t quite measure up to the ANC bar set by the $399.95 Bose Noise Cancelling Headphones 700, and they offer many of the same features as the Club 950NC, which JBL sells for $100 less.

Available in black, the Club One headphones have a circumaural (over-ear) design, with a generously cushioned headband and earpads. The fit is secure and quite comfortable, despite the headphones feeling rather bulky. The headband has a stitched leather look, and the earpads also have a leather-like covering. The outer panels of the left and right ears are emblazoned with the JBL logo over an eggshell-like finish, and the earcups swivel and fold inward in order to fit inside the included zip-up hard-shell case.

In addition to the case and a USB-C charging cable, the headphones ship with two audio cables for passive listening—one coiled cable, and one cloth-lined cable with a single-button inline remote control and mic. There’s also a quarter-inch headphone jack adapter and an airline jack adapter included, for a nice haul of accessories.

Both earcups house several controls. On the left ear, the side panel houses a power button, a Bluetooth pairing button, and a button that enables/disables ANC (when held for two seconds) or switches on Ambient mode (when pressed quickly). There’s also a status LED and a connection for the included audio cables. The left ear’s outer panel houses a voice assistant button—just press the JBL logo and ask Alexa or Google Assistant a question. The right earcup houses volume up/down buttons, a central playback/call management button (that also summons Siri), a USB-C port for the included charging cable, and another connection for the included audio cables—they can attach to either ear.

Unfortunately, with all of these buttons, JBL still decided to combine the volume buttons with track navigation. A long press of either will skip forward or backward a track, and it’s quite easy to accidentally skip a track when you mean to raise the volume.

The JBL Headphones App is a one-size-fits-all app that will recognize the Club One and unlock certain features. On the main screen, you can choose which setting you want the Ambient Mode button to use: Talk Thru allows you to converse easily without removing the headphones (it lowers the volume of any audio that is playing), while Ambient Aware allows you to hear your surroundings, but doesn’t lower the music levels. You can also enable or disable ANC, and select and set up your preferred voice assistant. In addition, there are various EQ presets to choose from, and you can design your own and save them.

Internally, 40mm drivers deliver a frequency range of 20Hz to 20kHz. The headphones are compatible with Bluetooth 5.0, and support AAC and SBC codecs, but not AptX.

JBL estimates battery life to be roughly 25 hours with both ANC and Bluetooth engaged, or up to 45 hours with only Bluetooth. Both are solid numbers, but your results will vary with your volume levels.

The headphones deliver solid active noise cancellation when it comes to low-frequency rumble. With the ANC engaged, deep lows (like you hear on a plane or train) are substantially tamped down, as are consistent whirs, like that of a fan or AC unit. The ANC has a little more trouble with sounds like office chatter and keyboard typing—it managed to quiet down some of those sounds in testing, but the higher frequencies remained.

There’s not too much audible hiss created by the ANC (though there is some, which is common). And the noise cancellation doesn’t seem to change the sound signature too much when it’s engaged, which is another common pitfall of wireless ANC models.

On tracks with intense sub-bass content, like The Knife’s “Silent Shout,” the headphones deliver powerful low-frequency response matched with sculpted highs. At top, unwise listening levels, the bass doesn’t distort, and at more reasonable levels, the lows are still intense. Of course, if they’re not powerful enough for you (or are too much), you can adjust things in the app’s EQ.

Bill Callahan’s “Drover,” a track with far less deep bass in the mix, gives us a better sense of the Club One’s general sound signature. The drums on this track can sound thunderous on some bass-forward headphones, but here, they sound full and natural without much exaggeration. Callahan’s baritone vocals get a pleasant blend of low-mid richness and treble edge through the Club One, and the guitar strums seem particularly crisp and bright—this is a sculpted sound signature anchored by lows, with bright highs. When there isn’t much bass in the mix, the headphones don’t try to invent it.

On Jay-Z and Kanye West’s “No Church in the Wild,” the kick drum loop receives plenty of high-mid presence, allowing it to retain its punchiness, while the vinyl crackle and hiss that’s usually relegated to background status takes a step forward in the mix. The sub-bass synth hits that punctuate the beat are delivered with relative restraint—we hear them, and get the full extent of their depth, but the bass isn’t wildly boosted like it is on many bass-forward pairs. The vocals on this track are delivered with excellent clarity—crisp, clear consonants without much added sibilance.

Orchestral tracks, like the opening scene from John Adams’ The Gospel According to the Other Mary, have a subtle bass depth to them through the Club One. Again this is natural—though we are used to hearing booming bass from modern headphones, the lows on this track are subtle to begin with, and here JBL doesn’t attempt to dial them up too much. The higher-register brass, strings, and vocals have a strong presence in the mix, and this track in particular is bright, without losing the anchoring that the lower-register instrumentation provides.

It is possible for bass lovers to get more oomph out of these drivers using the in-app EQ, but our experience was that boosting the bass significantly resulted in lowering the overall volume somewhat to prevent distortion. This is fine, but in the end, the gains in bass seem subtle.

The mic offers solid intelligibility. Using the Voice Memos app on an iPhone 8, we could understand every word we recorded, even if there was some typical Bluetooth distortion fuzzing up the edges of words. The mic signal is strong, and callers should have no issue understanding you.

There’s nothing wrong with JBL’s Club One headphones, but there’s little that sets them apart from a field of similarly priced competitors. From an ANC perspective, they can’t compete with the $400 Bose Noise Cancelling Headphones 700, and the arguably better-sounding $350 Sony WH-1000XM3 headphones, which also deliver strong ANC. And if you’re willing to go the in-ear route, the $250 Apple AirPods Pro offer strong audio performance and solid ANC. Or for the same price, you can pick up a pair of JBL’s Club 950NC headphones, which deliver similar quality and features to the Club One for $100 less.