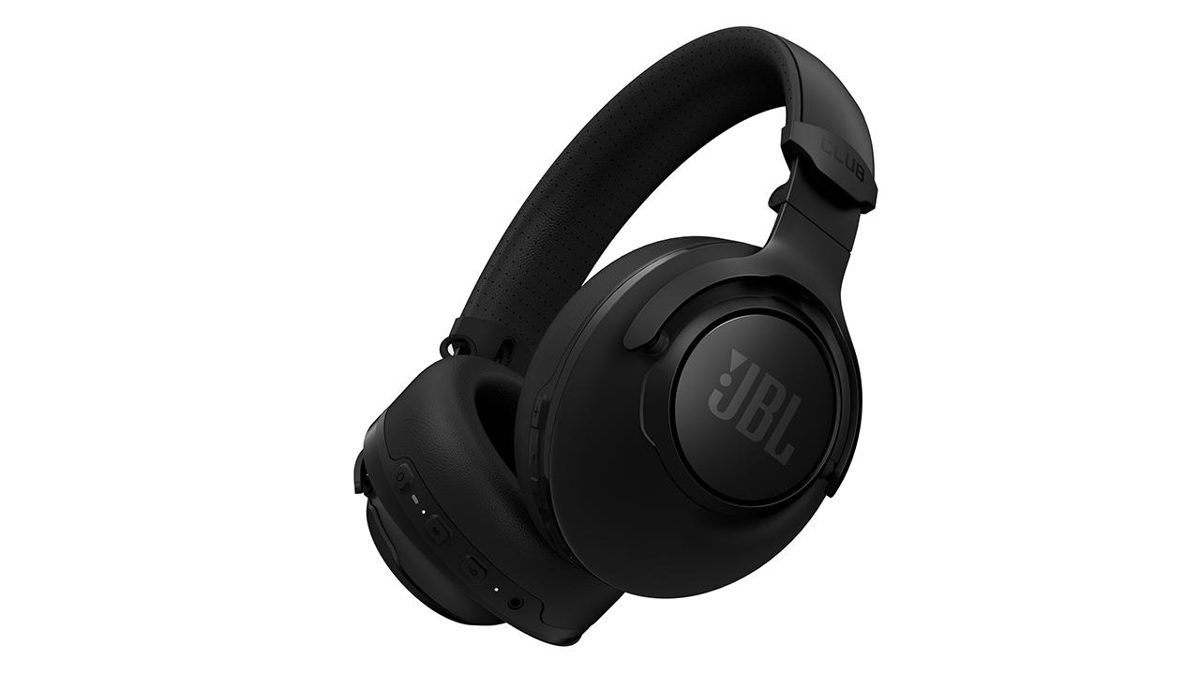 Perhaps the most intriguing thing about JBL’s new $249.95 Club 950NC headphones is how much they resemble and act like the company’s $349.95 Club One. Considering the $100 difference, both pairs are armed with ANC (active noise cancellation) and support for Amazon Alexa and Google Assistant. Both also offer solid audio performance and ANC, though not the best we’ve tested. That said, $250 is relatively affordable when it comes to over-ear noise cancellation, and so the Club 950NC headphones are easier to recommend than the Club One, though Sennheiser’s $200 HD 450BT remain our Editors’ Choice in this price range.

The Club 950NC are circumaural (over-ear) headphones with generous cushioning in the earpads and headband, which are covered in leather-like material. The earcups have an eggshell-like finish and fold up to fit inside the included zip-up hard-shell case. The headphones also ship with an audio cable that has an inline single-button remote control and mic.

Both earcups house several controls. On the left ear, the side panel is home to a power button, a Bluetooth pairing button, and a button that enables/disables ANC (when held for two seconds) or switches on Ambient mode (when pressed quickly). A status LED and a connection for the included audio cable are also located on this panel. The left ear’s outer panel houses a voice assistant button—you can press the JBL logo and ask Alexa or Google Assistant a question.

The right earcup houses a USB port for the included charging cable, as well as volume up/down buttons, a central playback/call management button (that also summons Siri), and a Bass Boost button. Unfortunately, with all these buttons, JBL still decided to combine the volume buttons with track navigation. This means a long press of either will skip forward or backward a track, and it’s quite easy to accidentally skip a track when you mean to raise the volume.

The JBL Headphones App is a one-size-fits-all app that will recognize the Club 950NC and unlock certain features. On the main screen, you can choose which setting you want the Ambient Mode button to use: Talk Thru allows you to converse easily without removing the headphones (it lowers the volume of any audio that is playing), while Ambient Aware allows you to hear your surroundings, but doesn’t lower the music levels. You can also enable or disable ANC, and select and set up your preferred voice assistant. In addition, there are various EQ presets to choose from, and you can design your own and save them.

Like the Club One, this model is compatible with Bluetooth 5.0 and supports AAC and SBC codecs, but not AptX. Interestingly, the headphones employ the same 40mm drivers as the Club One, but have a slightly wider frequency range of 16Hz-22kHz.

JBL estimates battery life to be roughly 22 hours with ANC and Bluetooth in use, and 55 hours with Bluetooth only. These numbers are good, but your results will vary with your volume levels, as well as ANC and Bass Boost usage.

Neither the Club One nor the Club 950NC are going to outperform top competitors like the $400 Bose Noise Cancelling Headphones 700, but both deliver serviceable noise cancellation. The Club 950NC headphones handle deep lows and drones well, tamping down the type of noise that planes and trains produce significantly. A noisy cafe or office chatter will get its midrange sounds dialed back significantly, but the higher frequencies are still quite audible, as are keyboard clicks and other higher-pitched sounds.

There’s also a slight hiss when the ANC is activated—this is all common for most ANC, especially on more affordable models. Given that these headphones are a full $100 less than the Club One, it’s surprising how similar their ANC performance is.

One big difference between the Club One and the Club 950NC is the latter’s inclusion of a Bass Boost button. This may not appeal to purists, but it should be noted that the Club One headphones notably lack the typical big-bass sound we hear in many JBL models, while here you certainly get it, at least when Bass Boost is engaged. This is arguably too much bass response, making acoustic recordings sound unnatural, but you can always enable it and then adjust the EQ to achieve a slightly more natural, bass-forward sound.

With Bass Boost off, on tracks with intense sub-bass content, like The Knife’s “Silent Shout,” the headphones deliver powerful low-frequency response, and don’t distort at top volumes. This changes with Bass Boost in play—the lows overwhelm the mix, and at top volumes, distortion can creep in subtly.

Bill Callahan’s “Drover,” a track with far less deep bass in the mix, gives us a better sense of the Club 950NC’s general sound signature. Again, with no Bass Boost, the drums on this track sound natural and Callahan’s baritone vocals get an ideal low-mid richness. Add in the Bass Boost, and all balance is thrown out the window—there is thunder in the drums and Callahan’s voice gets an inordinate amount of low-frequency depth applied to it. Still, if you have the patience to apply both Bass Boost and then go into the EQ section in the app, it’s possible to concoct a more balanced, but still bass-boosted sound signature. If that sounds like a lot of work, we recommend leaving the Bass Boost off—when it’s off, there’s still some solid richness in the lows, and the track feels relatively balanced.

On Jay-Z and Kanye West’s “No Church in the Wild,” the kick drum loop receives an ideal high-mid presence in normal listening mode, allowing it to retain its punchiness. The sub-bass synth hits that punctuate the beat are delivered with restraint in this mode, and surprisingly the same is more or less true with Bass Boost on. The sub-bass does get a little heftier, but the real boosting happens to the drum loop—so Bass Boost is working primarily in the lows and low-mids, and less so in the super-deep sub-bass realm. The vocals on this track, with Bass Boost off, are delivered with crisp detail and no real added sibilance.

Orchestral tracks, like the opening scene from John Adams’ The Gospel According to the Other Mary, sound bright and subtly anchored by the lower-register instruments in the mix. There’s plenty of detail here, and things sound neither bass-heavy nor brittle. If you’re thinking of pressing Bass Boost on a track like this, don’t.

The mic offers solid intelligibility. Using the Voice Memos app on an iPhone 8, we could understand every word we recorded, despite the presence of some typical Bluetooth mic distortion. The mic’s signal is strong, and callers should have no trouble understanding you.

JBL’s Club 950NC headphones aren’t a noise-cancelling powerhouse, but they offer quality ANC for the price. If you’re really after truly top-notch ANC, you need to spend quite a bit more—the $400 Bose Noise Cancelling Headphones 700 are probably the best option on the market for ANC quality, while the $350 Sony WH-1000XM3 headphones blend strong ANC and audio performance. When it comes to affordable models, meanwhile, we recommend Sennheiser’s HD 450BT headphones, which deliver the best audio and noise cancellation you’ll find for $200.Compared with JBL’s pricier Club One headphones, however, the Club 950NC represent a solid deal.