It’s Magic When Art, Science, and Technology Come Together 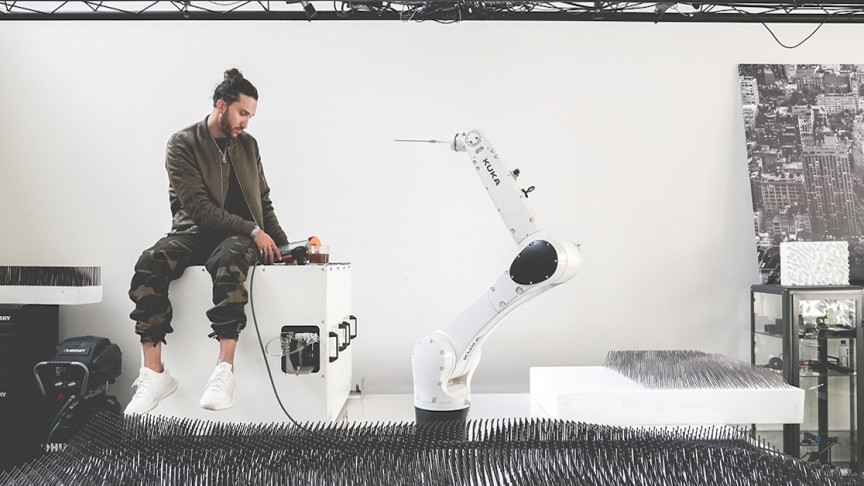 Art and science have much more in common than one might think. Each of these pursuits is, after all, an attempt by humans to describe and understand the world, and even the universe around us. IIn his book, Until the End of Time, American physicist Brian Greene argues that both of these pursuits are a direct subconscious response to the finite nature of life.

Though the methods used to reach that “aha” moment may be different, both art and science are fundamentally human, and both play very important roles in the human experience as well as human innovation. Nonetheless, something special happens when science and art play off each other, even intersect, with each of these areas offering a little more insight into the other. Emerging technologies like artificial intelligence have led to new types of creativity. Complex computer-driven algorithms are helping us design, engineer, and paint like never before.

Job titles like AI Artists or AI Designer are becoming more common. While on the other end of the spectrum, these same intelligent machines are helping unlock the secrets of art dating back to the renaissance. Stunning human-made biological sculptures are being used to save the bees. Ideas derived from fluid dynamics paired with particle science are being the basis for sublime interactive experiences.

Technology is changing the way we experience and create art

There are so many inspiring examples out there. For as long as artistic expression has existed, it has benefited from interplay with scientific principles. That same interplay has led the curious to tremendous discoveries. It was Albert Einstein that once said, “The greatest scientists are artists as well.” Today, we will look at modern examples of how science is inspiring art, and how art is inspiring scientists.

Every great advance in science has issued from a new audacity of the imagination – John Dewey.

Technology is changing art and opening the doors to new virtual museums, interactive hubs, and new creative mediums. It is no secret that technology is an increasingly pervasive part of our lives, and its influence is finding its way to the art world. Some of the changes may seem obvious, like the increasing popularity of digital art galleries amidst the current coronavirus pandemic. But there are other, less expected changes that have made art more accessible to both creators and buyers.

Here is a question for you, “If a computer creates ‘art,’ should it still be considered art?” This conundrum has laid at the heart of some of the most controversial types of art, AI-generated Art. AI-generated art has sold for thousands, but does that mean it is any good? An AI-generated portrait of Edmond Belamy by French art collective Obvious Art sold for an eye-watering $432,000 in 2018, the most expensive AI painting by far.

The process of creating AI-generated art is not as complicated as you may think. Though there are many different paths to creating AI art, in general, artists write algorithms that are able to “learn” a specific aesthetic by analyzing thousands of images.

The algorithm then tries to generate new images along the lines of the aesthetics it has learned. You could teach an AI algorithm to “paint” like your favorite artists from the renaissance or modern pop art. This convergence of technology and art may someday prove to be one of the most exciting new areas in the art world. And with new AI artists appearing each year, someday may be getting closer.

Blockchain is allowing more people to participate in the art world.

A high-end art collection is usually seen as a fairly exclusive pursuit, reserved for individuals with high net worths. Companies like Maecenas are now using blockchain technologies to help people with ordinary incomes to get into the world of art collecting. Cryptocurrencies have grown in popularity over the years, generating billions of dollars in value. However, one of the biggest hallmarks of the crypto boom was blockchain technology and its ability to democratize marketplaces and remove the need for central authorities.

This is what Macenas is doing in the art world. The company allows anyone to purchase shares of fine artworks, the same way you might purchase a share of a company. These art shares are purchased using blockchain tokens called ART tokens, which record the transactions. Thanks to start-ups like this, people no longer need millions of dollars to get in on the excitement of investing in art.

Science is also changing the way we interpret and understand art.

It is the tension between creativity and skepticism that has produced the stunning and unexpected findings of science. – Carl Sagan

Those within the art industry currently have a lock on creating influential art criticism. However, similar to the way algorithms are being used to create art, researchers are also using algorithms to analyze art. These tools could even help us unlock some of the secrets of our past.

Art from thousands of years ago holds clues to past cultures. In most cases, the best we can do is make an educated guess about the meaning and purpose of such ancient art. Even so, understanding how and why art has evolved over the millennia is not easy. This is where technology steps in to help. A paper, published by researchers from Estonia and Korea, argued that mathematics may hold the key to understanding art history.

Aside from the aesthetic appeal of modern art, art is a gateway to the emotional tone of a society. Art is traditionally looked at through a qualitative lens. The researchers here wanted to try something different.

After scanning thousands of paintings, the team used mathematical algorithms to find commonalities between them over time. They were able to identify observer trends in painting styles, as well as techniques, over certain eras. Quantitative methods have become more important in the art world and are equally important in the creation of AI-generated art.

At the intersection of art, technology, and science, we find creative solutions to real-world problems

Art and science are not only about making things functional and appealing. Merged together, these two areas can become a conduit for change, inspiring real-world solutions to global issues. A master at combining the arts with sciences, architecture, and materials engineering, Neri Oxman has a series of projects that encapsulate all of this and much more. Here are two of our favorites.

Neri Oxman and her team at the Mediated Matter Group have blurred the lines between art and biology to create stunning new designs, art, and sculptures as well as to solve real-world problems.

Oxman is an American–Israeli designer and professor at the MIT Media Lab, who is recognized around the world for her ability to combine architecture, design, biology, computing, and materials engineering. In 2016, Oxman and her Mediated Matter Group team created a Synthetic Apiary. In 2018, 40% of the honeybee colonies died in the US, according to a report published by the University of Maryland.

In nature, there is no separation between design, engineering, and fabrication; the bone does it all. – Neri Oxman

The causes of this mass die-off have been attributed to global warming, habitat loss, parasites, and a class of bee-killing insecticides known as neonicotinoids. The Oxman design project hopes to combat colony loss by exploring the possibility of constructing controlled, indoor environments that would allow honeybee populations to thrive year-round.

To create this environment, the team at Mediated Matter studied honeybees’ habits and needs coming up with the precise amounts of light, humidity, and temperature needed to keep the bees thriving in a Spring-like environment.

Adapting to their new environment, the bees were provided with synthetic pollen and sugar water while their health was tracked consistently. Paralleling an art performance, the project was a success. As described by the team, “In this unique experiment, humans and honey co-habitat, enabling natural cultivation and in artificial space across scales, from building scale to the organism scale.”

The team at Mediated Matter has also created a stunning sculpture that takes an aesthetic vision and gives it a purpose that directly tackles a prevalent global issue.

Upon briefly inspecting the Aguahoja I architectural pavilion, you might simply walk away thinking it is another stunning sculpture. But upon further expectation, you come to notice that there is something uniquely different about its composition. Standing 16 feet (5 meters) high, Aguahoja I is composed of some of the most abundant biopolymers on our planet. According to Oxman’s team, the pavilion is made of 5,740 fallen leaves, 6,500 apple skins, and 3,135 shrimp shells. The structure is known as a bio-composite.

“The materials are designed as a hierarchical network of patterns optimized for structural stability, flexibility, and visual connectivity.” In short, they were able to merge these various materials into this singular totem, incorporating each material in a way to maximize the sculpture’s integrity. They created these biopolymers through the process of programmed decomposition.

The structure itself was then 3D-printed by a robot, shaped by water, and augmented with synthetically engineered organisms and natural pigments. Aguahoja I is extremely durable, able to withstand changing environmental conditions such as heat and humidity while retaining its flexibility.

Oxman and her team created this art and science project as a direct response to the impact of plastics on our environments, highlighting how biodegradable polymers could be used in future manufacturing methods.

Both of these projects embody Oxman’s vision of the future, “The future of design is a future where anything material in the environment – whether it’s wearables, cars, buildings – can be designed with this variation of properties and relationship with the environment that can take part in the natural ecology,” describes Oxman.

The intersection of art, science, and technology could hold the key.

In his book on Leonardo Da Vinci, Walter Issacson discusses the historical figure’s ability to meld the humanities with science. This core superpower directly shaped this genius’s art and inventive creations. “innovation resides where art and science connect is not new.”

“Leonardo da Vinci was the exemplar of the creativity that flourishes when the humanities and sciences interact,” says Issacson.

“When Einstein was stymied while working out General Relativity, he would pull out his violin and play Mozart until he could reconnect to what he called the harmony of the spheres.”

This common theme has run true today and lies at the core of some of our modern heroes. From Albert Einstein to Carl Sagan, to Thomas Edison to Steve Jobs, these individuals have championed the relationship between science and technology, attributing it to their own great feats. It will be interesting to see how the fields continue to blur together over the decades.