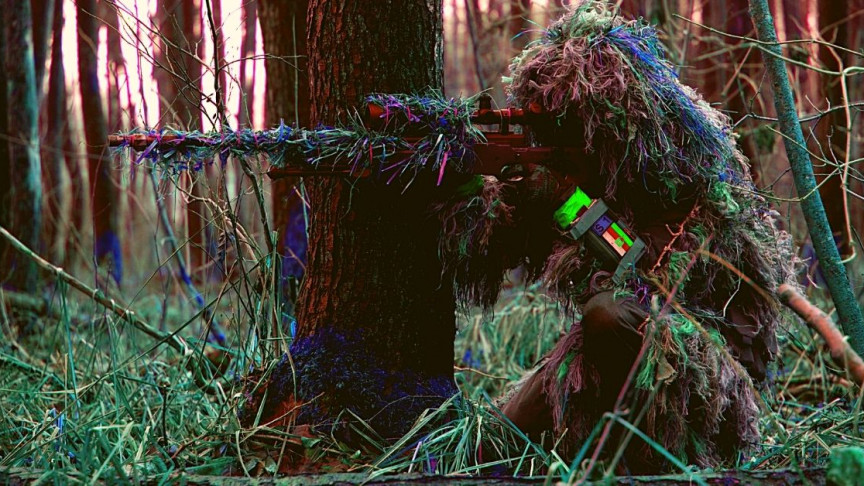 Researchers developed a new kind of cloaking “skin” made of bendable parts — using active cooling and heating to mimic visible colors or thermal profiles of the surrounding environment — according to a recent study published in the journal Advanced Functional Materials.

The cloaking skin can even switch from one to the other mode in roughly five seconds, enabling wearers to camouflage themselves during the day, while also barely registering on night-time thermal cameras.

Continuing advances in metamaterials and “soft” devices have helped develop research prototypes enabling wearers to take a cue from chameleons, and blend into their surroundings — at least when it comes to the spectrum of visible light.

The recent paper comes from South Korea, and hints at a future where troops move invisibly, with even their heat signatures beyond conventional means to track.

The patches of artificial “skin” are made from “pixels” — which contain thermochromic liquid crystals capable of changing color, depending on the surrounding temperature, “thus allowing the generation of a diverse number of colors by controlling temperature. The cloaking in the visible range is therefore achieved separately by matching the ambient color,” said the paper from the team — under the leadership of Seung Whan Ko of Seoul National University.

The team demonstrated the new technology with a patch placed on a human hand — which they moved across a background of varying colors and temperatures. “As the hand moves across different backgrounds (whether it is a visible or [infrared] cloaking mode) … each pixel sequentially switches its color/temperature based on their relative positions,” wrote Seung in the study.

The research team still has work to complete before the suit can really “see” all of the colors surrounding it. In the recent paper, the team inputs the color themselves to test the device. “However, we recently developed a method to detect and mimic the environment by integrating a micro camera with our devices to make an autonomously working device,” said Seung to Defense One in an email.

Of course, we’re on the cusp of a revolution in several fields of bionic technology. Some recent examples include the H.U.L.C. exoskeleton — a titanium body from Berkeley Bionics and Lockheed Martin to give soldiers a third-generation exoskeleton capable of lifting up to 200 lbs (90.7 kg).

Additionally, bionic lenses could serve to provide wearers with super-human sight, and even use tears as biomarkers.

The defense industry is also working on Quantum Stealth — a bleeding-edge device capable of bending light around it, replacing the visible image of the wearer with the light of the surrounding environment, much like the device researched in the recent study.

To show the patches’ versatility in combat, Seung added he and his team need to scale up the device — in addition to using a more efficient power source. In the Arctic or desert — where wearers would confront extreme temperatures — environmental conditions could affect the device’s cloaking ability.

“This problem may be solved by adding a proper thermal insulator,” said Seung. But this might also cause performance to vary, which means more experimentation is needed before the device is fully prepared for live combat.

Seung also noted how work on the device took inspiration from the “intriguing properties of cephalopods,” like octopi, squid, and cuttlefish. While we’re a long way from the invisible soldiers from sci-fi franchises like “Star Trek: Deep Space Nine,” there’s no doubt we’re on the fringe of a major leap in soldier camouflage — one we may soon see leave conventional uniforms in the dust of the 20th century.