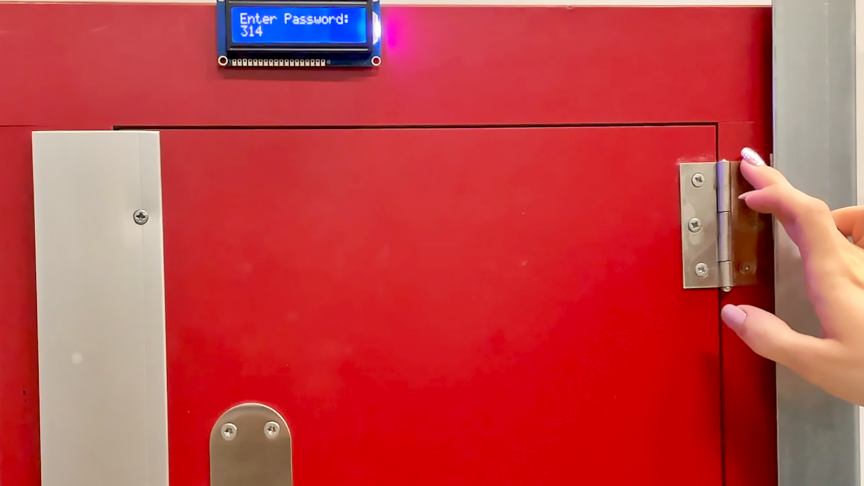 Evgeniia Gilshtein, a researcher from the Swiss research institute EMPA, has developed an invisible lock system to give thieves and intruders a particularly hard time of breaking and entering.

For the device, invisible buttons are printed with conductive ink on a transparent polymer film, an EMPA press release reads.

Using this technology, users can have a lock mechanism with no obviously discernable method for it to be opened – only the owners know where the buttons are located.

In a video (below) released by EMPA, the technology is used to turn the screws of a door handle into buttons. When the researcher presses each screw in the correct sequence, access is granted.

The “invisible keyhole” was built using electronic circuits and sensors on polymer films, developed by the research team at EMPA’s “Thin Films and Photovoltaics” lab in Dübendorf, where Evgeniia Gilshtein works.

The technology utilizes transparent conductive metal oxides (TCO). The conductive ink is applied onto a surface using an inkjet printer with micrometer precision.

The researchers also used a clever method to hide the circuits from sight in the device:

“After the circuits were printed and preliminary annealed on the carrier foil, the foil was dyed blue. Since the blue ink, unlike a transparent film, can absorb light, this now enables the ink to be sintered onto the substrate, using high-energy light irradiation,” the EMPA press release says. “In the process, not only does the blue color disappear, but the optoelectrical properties of the “secret ink” made of indium tin oxide nanoparticles are improved in the same step.”

The sensor surfaces cannot be seen by the human eye and can be placed anywhere the user desires, such as a pane of glass or a curved door handle. The researchers say the technology is scalable due to the comparatively simple printing process.

Gilshtein says the invisible door lock could be used in banks, hospitals, and private homes.

The impressive security technology could no doubt also be adapted to some pretty wonderful hidden doorways and passageways within a house.

Aside from adding an extra dimension of safety to a front door lock, it could also enable a very well hidden safe room, for example — just make sure you don’t forget where your invisible keypad is, the same way you’d forget where you left your keys.