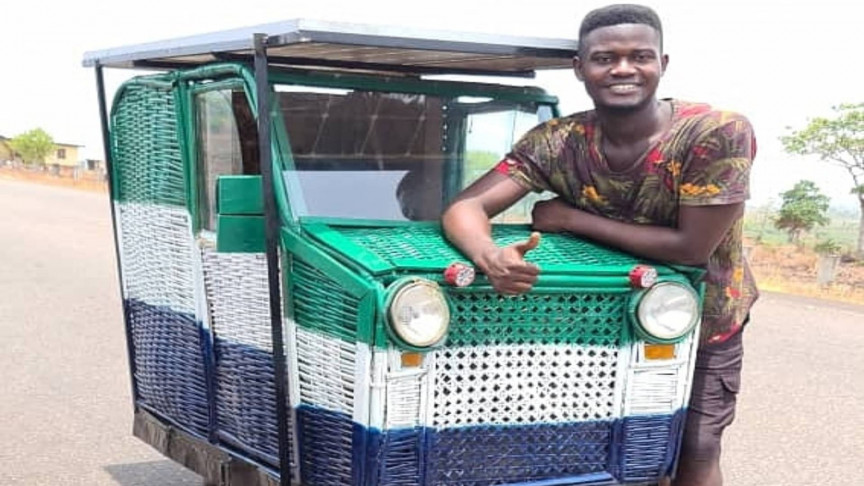 According to HARPIS-SL, Sierra Leone is rated as the 17th most vulnerable country in terms of air pollution due to a variety of causes including the fact that most households use charcoal or wood as a source of fuel for cooking and other related activities. Add pollution from the vehicles to that, and you have a major problem! Now, Emmanuel Alieu Mansaray, a 24-year-old man from Freetown, Sierra Leone is fighting back against pollution in the most ingenious way.

The university student built a solar-powered car made from trash and it works! IE spoke to Mansaray to get all the details on the vehicle he calls the ‘Imagination car’.

“The Imagination car was built firstly as a result of the knack in me to invent creative technology to solve social problems in my community. So, I decided to create the ‘Imagination Solar Car’ which is powered by the sun to reduce the risk of contracting incommunicable and respiratory diseases like lung cancer, asthma, etc. caused by inhaling hazardous fumes emitted by cars using other types of fuel (fossil, gaseous and liquid),” explained Mansaray.

But building this vehicle was no easy task. It took the patient inventor three years to complete and he made it using the country’s signature colors of green, white and blue. The solar vehicle cost Mansaray $500 in total and can now be seen going up to 9 miles an hour (15 kilometers an hour) in his hometown.

Mansaray explained that he had a talent for coming up with innovative solutions to problems from a child. “I started coming up with creative solutions since I was a child. I was creating amazing technologies to solve the electricity problems in our house during the night. We used this energy to study and charge our mobile phones.”

And thus far his passion project has been very well received. “I have received lots of positive feedback from people all over the world. They told me that I’m a clear positive example to the world. I made a breakthrough with nothing. Some even wanted to help me financially for me to improve on my work but they don’t have enough money.”

And what does the future hold for this brilliant inventor? “In the future, my dream is to become a great renewable energy inventor,” added Mansaray. We are sure his dream will soon come true!