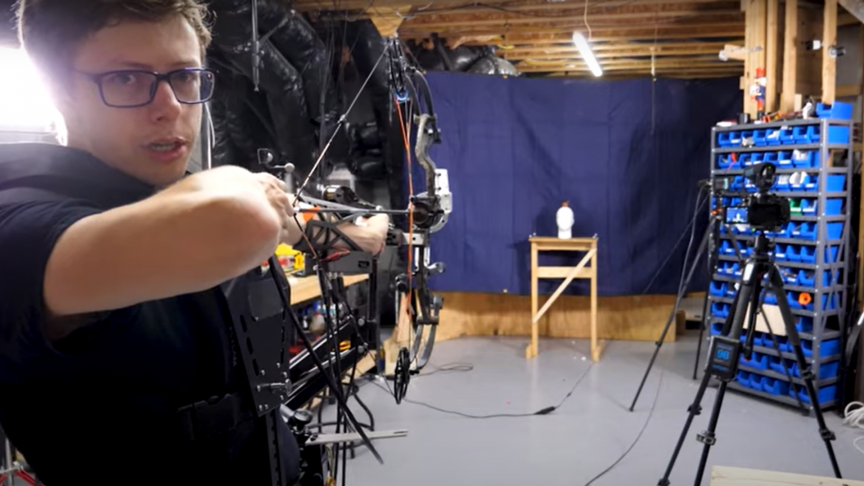 Ever wanted to be a skilled marksman? Technology can help. Just one warning, money can’t buy this. You’re going to need to pay for it in hard work and hours of engineering. That’s what, Shane Wighton did.

Based in North Carolina, Wighton is an engineer at heart and for over a year has been designing and making stuff for building enthusiasts on his YouTube channel, Stuff Made Here. His exploits include making crocs that are as hard as steel, a lock that cannot be picked, and even a hair cutting machine. He also has some videos with more practical uses like a baseball bat that always hits home runs, a moving basketball hoop that ensures that you never miss, and now his latest, a bow that can aim and fire at stationary as well as moving targets.

Although the World Archery Federation would not want the likes of Wighton anywhere near a competing event, for engineers and engineering enthusiasts, his work is no less than art. Of course, it wasn’t a stroll in the park. As Wighton says in his video, he has spent multiple weeks making this contraption that only releases the arrow when the bow is aligned with the target.

As anybody who has seen archers in action, the mere alignment of the bow and the target are not enough. Considering the distance to the target, an archer modifies the angle of the release, so that the arrow drops onto the target. So, Wighton had to program this into the release function, which repeatedly missed the target when he began.

During the process, Wighton also designed a target release contraption to reduce his dependence on an irritated wife, whose core competencies are actually hitting targets than releasing them for beta-testing of robotic arms. Unfortunately, that is one byproduct of inventing something that has been done before or could have competed with the world wide web, some decades later.

As is revealed towards the end of the video, there is a fundamental flaw in the starting material that Wighton picked up for his attempts and he does end up creating some more contraptions to accommodate his correction. The result is the flawless demonstration of the technology that can aim and fire at targets without any miss.

But Wighton can’t take all the credit. The super-powerful cameras in his workshop and the Fuse 1 3D printer that was used for 90 percent of the builds were extremely useful associates in the process. What we must credit Wighton for are the multiple hours he first spent correcting his software, then even writing it again from scratch and taking the recoil blows every time the bow releases the arrow. Guess what needs to be incorporated next is an early warning system.