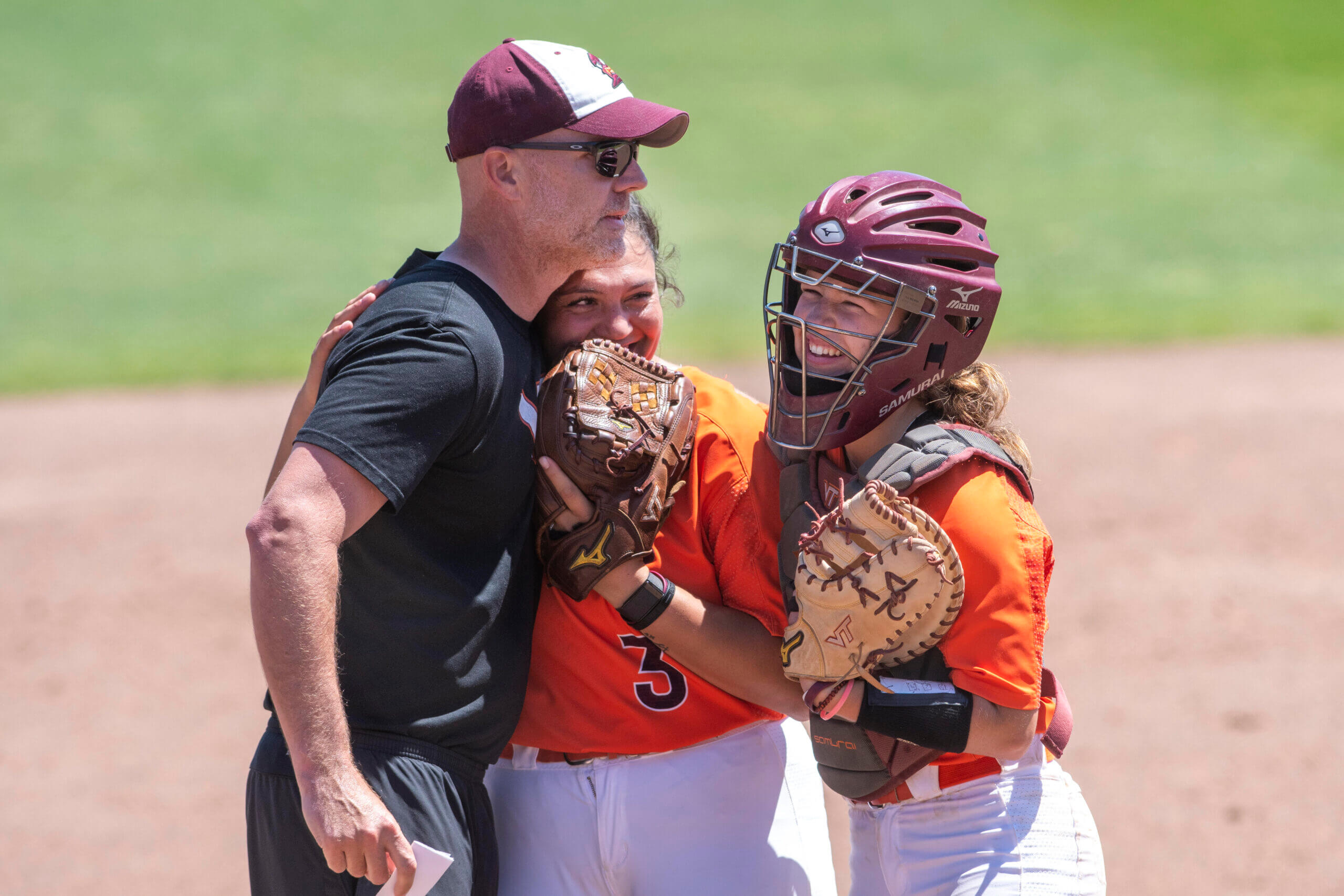 BLACKSBURG, Va. — If the barriers outside Tech Softball Park don’t give this weekend’s festivities an air of extra importance, the temporary bleachers jutting up from down the left-field line certainly do.

An extra 800-1,000 fans will be able to cram into the cozy confines of Virginia Tech’s home softball field. Beamer Way, which runs just beyond the outfield wall, will be shut down to traffic this weekend, with food trucks brought in for spectators to enjoy.

“I haven’t really seen many sporting events around campus other than football or basketball kind of looking like this,” Hokies pitcher Keely Rochard said. “So it’s really important for our sport and for Virginia Tech.”

It’ll be the culmination of a four-year rise for Tech under coach Pete D’Amour, whose Hokies boast a 41-7 record, the ACC’s pitcher (Rochard), rookie (freshman pitcher Emma Lemley) and coach of the year and the national No. 3 seed.

It’s a team that’s rock-solid in all aspects. In what was a powerhouse ACC, the Hokies had the league’s second-best ERA (1.93), third-best average (.318) and fifth-best fielding percentage (.973).

It’s a group that, on the heels of a surprise super regional appearance last year, when it came within a win of knocking off No. 2 seed UCLA and qualifying for the College World Series for just the second time in school history, matter-of-factly went about its business this season, lining up a tough schedule and mostly handling it, going 10-5 against ranked opponents to get as high as No. 2 in the polls and garner a favorable national seed.

“We just play like we know how,” All-ACC designated player Meredith Slaw said. “It’s not a cockiness, it’s a confidence.”

That was on display Thursday at the news conference ahead of the regional, which features Kentucky, Miami (Ohio) and Saint Francis (Pa.). Rochard, Slaw and Lemley deftly answered questions about raised expectations as the regional host, confident in the team’s chances but always bringing it back to the team’s game-by-game, pitch-by-pitch ethos.

When they were done answering, D’Amour weighed in, saying that the questions were the most the team had talked about being a No. 3 national seed all week.

“This team,” D’Amour said, “it doesn’t really faze them.”

Coolly handling success wasn’t always the Hokies’ M.O. In the fall after D’Amour first got to Blacksburg, hired after a successful two-year stint at Kennesaw State following a decade run as a Missouri assistant, he remembered Virginia Tech handily beating a team that it had lost to the previous spring.

D’Amour walked out to left field, where his team had gathered after the game, and the players were hooting and hollering, living up their blowout win.

Thus, the tone was set.

It helped that he had talent to work with. Truth be told, it was a bit of a risk for athletic director Whit Babcock to sever ties after the 2018 season with Scot Thomas, the only coach the program knew in its first 23 years of existence, and by extension Angela Tincher, that team’s pitching coach and the greatest player in program history, one who led the Hokies to the College World Series in 2008. Thomas had guided Tech to eight NCAA regional appearances, but his teams missed the postseason his final three years, finishing under .500 the last two.

Enter D’Amour, who had an immediate impact on the team’s culture. He thinks the key to Tech’s turnaround was two-pronged. First, the Hokies develop players, particularly pitchers. Assistant coach Doug Gillis has worked wonders with Tech’s hurlers, tutoring the ACC’s pitcher of the year in all three years the award’s been handed out since he arrived in Blacksburg.

Second, D’Amour treats the players like adults. Those courtesies range from what would seem like trivial stuff, such as letting the team pick its uniform design or what meal to eat on the road (players don’t mind a good steakhouse or Italian joint), to the more practical.

“I say that they’re the most common sense coaches that I’ve ever been around,” Rochard said. “You’re supposed to be peaking around this time. I’ve heard of a lot of programs where they have their team doing conditioning tests as soon as they get back from summer. It’s like, we don’t have to be ready when we go back in the fall. And they’re like that.

“So we don’t have 6 a.m. lifts, because why do we need to wake up at 6 a.m.? I’d rather you guys get your rest, let your body recover and then when you show up, you give your best. We don’t need to have six-hour-long practices. He texts us, ‘What do you guys need to practice?’ And when someone says we need something specific, then we work on it. It’s just very open communication. His door is always open.”

What D’Amour has found is that the players respond by acting like adults, operating within a no-frills program. Scan the dugout during a game and you won’t see players with eye black smeared all over their faces or dancing after getting two outs or participating in organized cheers that are common in the sport.

“It’s let’s just go play ball. And I think we just have a bunch of ballers,” D’Amour said. “The biggest compliment I get is we act like a big-league baseball team.” 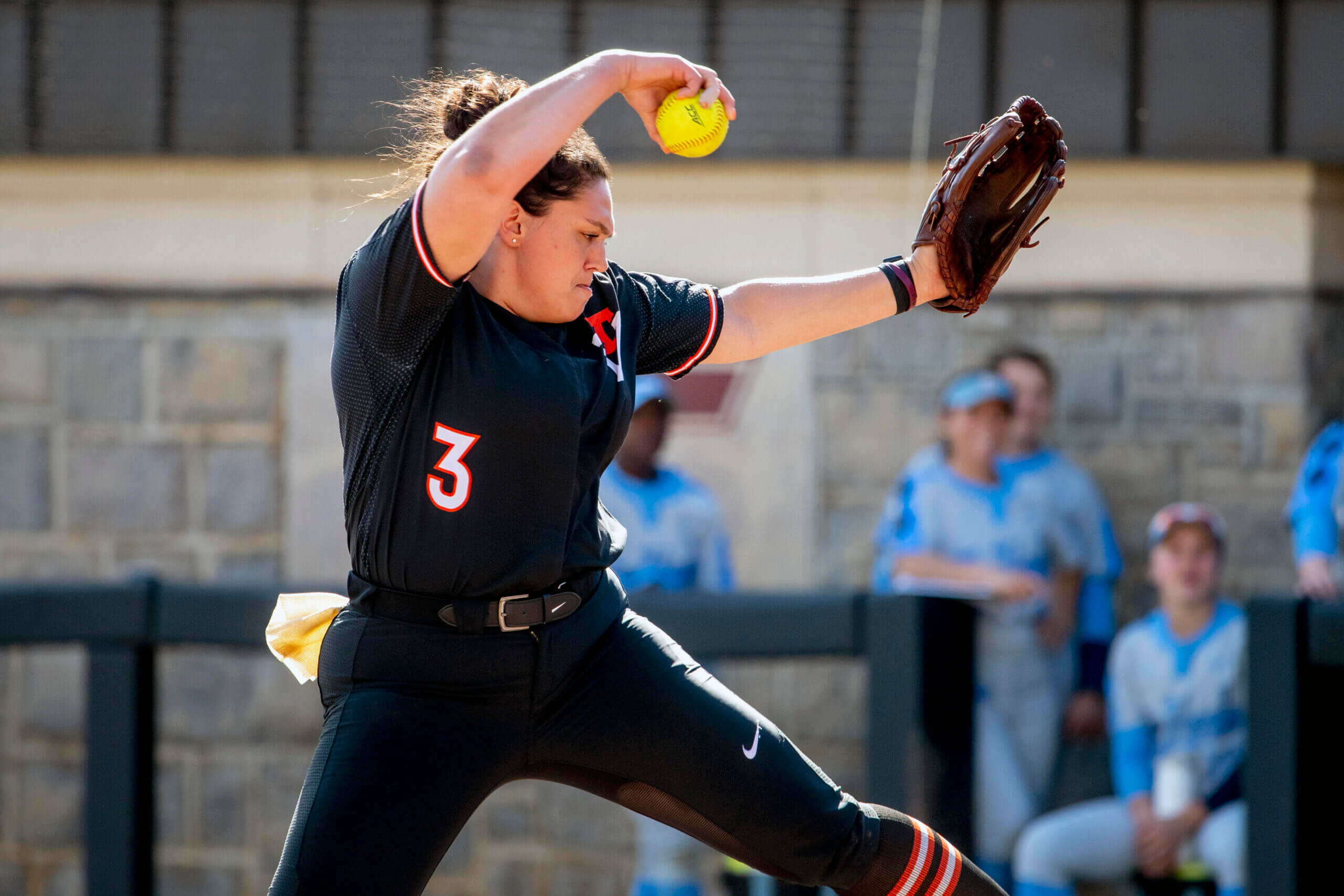 Keely Rochard has a 23-2 record with a 1.73 ERA. (Courtesy of Virginia Tech Athletics)

Success came in increments once D’Amour arrived. Tech made an NCAA regional that first season in 2019, bested in the final by host Kentucky. That momentum seemed like it might have been blunted when ACC pitcher of the year Carrie Eberle transferred to Oklahoma State, but the Hokies didn’t miss a beat, off to a 21-4 start to the 2020 season that was abruptly canceled due to COVID-19.

Last season came the leap, with Tech coming out of the Arizona State regional on fire and stunning No. 2 seed UCLA 7-2 in the opener of the super regional. That brought a tone shift, though, and two shoutout losses brought the fun to an end.

“I felt like we went into the supers last year with almost house money,” D’Amour said. “You’re not supposed to go to L.A. and beat UCLA. So they played free and won the first game, and Game 2 was almost like, uh-oh, expectations. We’re supposed to beat them. And they just ran all over us. I think they realized that they can compete at this level and what can we do to make sure we’re not in L.A. this year?”

With that in mind and the whole roster coming back, including Rochard, who took advantage of the extra COVID-19 season, everything the Hokies did this season was geared for the postseason. D’Amour lined up a schedule that featured a series at UCF and games against SEC schools like Missouri, Kentucky and Tennessee, plus a tournament at Alabama’s Rhoads Stadium, which seats nearly 4,000.

The goal was to juice Tech’s RPI in hopes of hosting a regional (mission: accomplished) and get the team battle-tested in hostile environments against tough teams.

“That experience and playing the harder teams, when you play somebody better than you — or potentially, they’re ranked whatever — it’s preparing you to be better in the end,” Slaw said.

Rochard put up another powerhouse season in the circle, with a 23-2 record and 293 strikeouts in 178 innings pitched. She’s diversified her repertoire of pitches over the years, adding backspin to her rise ball, consistency to her changeup and a drop ball to her arsenal, and her veteran presence on the team has earned her the nickname “Mom” by the other pitchers.

One of them is a welcome reinforcement in the rotation, Lemley, a freshman from Jefferson Forest High. (Her nickname? “Angry Turtle” for the way she cranes her neck out and furrows her brow while zeroing in on the catcher right before delivering a pitch.) She went 15-5 as a reliable No. 2 starter for the Hokies, with 193 strikeouts in 188 innings.

“It’s really big, because you have two kids you can put out there that you feel confident in every game,” said D’Amour, who was coy about who Tech would start in its regional opener Friday against Saint Francis. “To have an upper-60s rise ball kid as your 1A is a big deal.”

The lineup’s not full of boppers like some teams, but they get the job done. Sophomore outfielder Emma Ritter bumped her average up from .257 as a freshman to .406 this year and leads the team in most hitting categories, joined on the All-ACC first team by Slaw, a junior who leads the team in slugging percentage (.691) and is second on the team in homers (8), RBIs (35), and average (.394).

In all, 11 different Hokies made one of the three All-ACC teams this year. For a newcomer like Lemley, joining such an established group could have been daunting for a freshman asked to contribute so much right away, but she felt comfortable in the culture, emboldened by the team’s self-assuredness.

The Hokies don’t hope for success in softball these days. They expect it.

“Confidence rubs off,” Lemley said. “It’s nice to know that you have such a confident team behind you because that helps you put even more trust into your teammates. And I think that’s a big part of why we’re successful, because we have a lot of confident players who are confident in their abilities, but we’re confident in each other’s abilities.”

The big question is if the bats can consistently produce enough in the postseason. Last season’s run came to an end with back-to-back shutouts against UCLA, when the Hokies had just three hits. Just last week, Tech got upended in the ACC tournament with a 4-1 loss to Clemson. The Tigers hit two home runs, while the Hokies had just four singles.

“If you can score runs with one swing of the bat, it just helps at this time of the season,” said D’Amour, whose Hokies hit 1.19 home runs per game this year, 34th nationally. “Can we hit for power? That’s kind of the name of the game right now.”

With its pitchers, though, Tech at least has a shot at making it to Oklahoma City and the College World Series for the second time in school history. D’Amour had a good feeling when he took over the program. The players have only added to his confidence since.

“There was good talent here,” he said. “It was very similar to the Mizzou job that we had as far as facilities and players that we inherited. And I guess I’m just built different. I knew we’d make regionals right away. Now, to be a three seed, I’d be lying to you if I said that. But, after last year, knowing Emma was coming in, we had two upper-tier pitchers, the World Series was a possibility. I don’t know if we’re going to make it or not. But when that’s a possibility, you know you’re pretty good.”