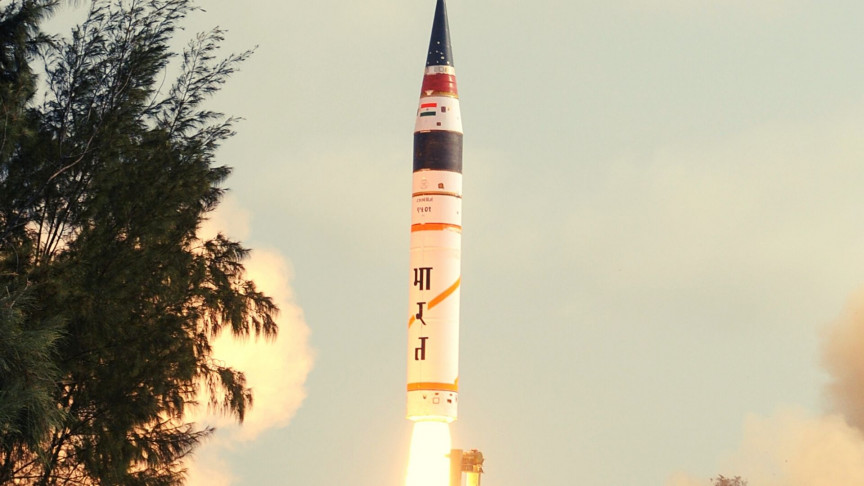 India successfully test-launched its first ballistic missile, the Agni-5, at roughly 10:20 AM EDT, using a three-stage solid-fueled engine that can fire nuclear payloads up to 3,000 miles with an extremely high level of accuracy, according to an initial report from Republic World, an India-based news service.

On the world stage, this weapon isn’t new, but it represents a major advancement for India, and fundamentally alters the balance of power in the region amid mounting tensions between major worldwide powers.

The test of Agni-5 is part of India’s central defense policy to have “credible minimum deterrence” to maintain its commitment to “No First Use”, according to the report. The country’s first long-range intercontinental ballistic missile was developed by the Defense Research and Development Organization (DRDO), and can target any location in China, and even reach as far as Europe. Major Gaurav Arya of India’s military forces said Agni-5 can actively deter China’s strategic plans. “This missile has nothing to do with Pakistan, it does not even consider Pakistan as a possible landing target,” he said. “This is an aim at China, which is very important.”

Arya also said that once Agni-5 is inducted for real-world service, it will serve as a powerful symbolic piece on the board against China’s government, according to the report. “We can hit you whenever we want, wherever we want inside Mainland China,” he said. This comes on the heels of another recent success of the DRDO’s Indigenous Technology Cruise Missile (ITCM), fired off the Odisha coast. Earlier, in July, India also test-fired its New Generation Akash Missile (Akash-NG), which is a surface-to-air missile system that can reach 37 miles (60 km). Other recently developed weapons from the DRDO include the Man-Portable Anti Tank Guided Missile, and another new missile of the Agni series called the Agni-Prime, with a range of 621 to 1,242 miles (1,000 to 2,000 km).

Ballistic missiles are far easier to shoot down than hypersonic weapons

This comes amid rising tensions between the U.S. and China, the former of which has good relations with India. But while India’s expanding ballistic missile capabilities add to the hypothetical chessboard should conflict happen, it’s still one step behind its northern rival. Earlier this month, it was revealed that China had tested a hypersonic missile in August that launched atop a Long March rocket, and then circled the Earth in low orbit before descending to its final target, which it only missed by 24 miles. For reference, the Earth is 7,917.5 miles in diameter, which means, as far as public knowledge goes, China is an entire step ahead of India’s ally, the United States, in the most advanced missile technology.

Last week, the Pentagon confirmed that a test launch of a hypersonic missile had failed, implying that the United States’ hypersonic weapons technologies have yet to reach the level of maturity of its China-built counterparts. While the U.S. has famously closed the technological gap with rival countries at blinding speeds, and India’s newest ballistic missile is another strategic asset in the defense against possible conflict with China, India’s ballistic technology could be vulnerable to strategic air defense capabilities of its northern neighbor, since ballistic missiles’ parabolic trajectory makes them a far easier target than hypersonic weapons.