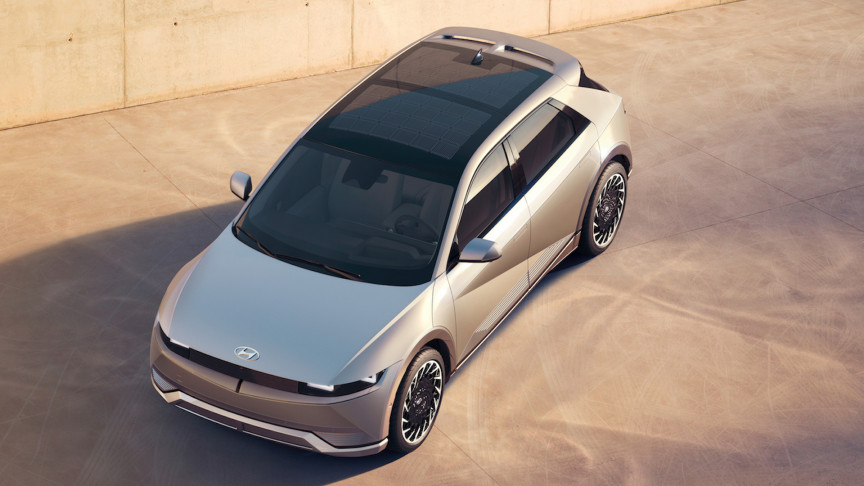 Solar-powered cars might still have some way to go before they truly take off. Still, more and more companies are adding optional solar panels to their electric vehicles as the technology becomes more viable — Tesla even announced a solar feature for the Cybertruck.

With its new IONIQ 5, unveiled today, February 23, in a virtual event, Hyundai joins the solar party with a car geared toward sustainability and futuristic mobility.

Originally presented at the 2019 Frankfurt Motor Show as the 45 EV concept, the car has been tweaked with a broad range of new features.

The IONIQ 5’s body design is a throwback to the 1974 Hyundai Pony, the company’s first production car.

The car will be available with two battery sizes and two drivetrains. A 72.6-kWh battery that produces a combined power output of 225-kWh and 605 Nm of torque. Combined with the all-wheel drive option, the IONIQ 5 can reach top speeds of 115 mph  (185 km/h).

The IONIQ 5 utilizes ultra-fast 400 V and 800 V multi-charging that has the capability to fully charge the vehicle in as little as 18 minutes using 350kW chargers.

The two stand-out features for the IONIQ 5 are the optional solar panels on the IONIQ 5’s rooftop as well as the ability to charge other electric vehicles — including e-bikes and e-bicycles — via a form of bidirectional charging.

The IONIQ 5’s solar panel roof option doesn’t come with the standard model — meaning pricing has yet to be revealed for the option.

However, Hyundai says the vehicle’s solar panel option can help extend range up to 1240 miles (2,000km) per year (around 3 miles per day) of additional range if it’s driven in locations that see a healthy amount of sunny days per year.

This isn’t the first time Hyundai has unveiled a car with solar options: in 2019, the company revealed the hybrid Sonata with a solar roof. Other companies investing in the potential of solar vehicles include Holland-based Lightyear and the urban mobility-focused Squad Mobility.

If the IONIQ 5’s battery level is above 15 percent, you can plug it into another electric vehicle to charge it. The charging speed is a little slow at 3.6kW, though it may well prove to be useful at a pinch — personal electronics such as laptops can also be charged using the technology.

An impressive feature in the IONIQ 5’s cabin allows a HUD (heads-up display) to be projected onto the vehicle’s windshield, allowing a safer way for drivers to look at their speed and directions without looking down from the road.

Hyundai says the vehicle reflects its commitment to sustainability — materials for interior touchpoints such as its seats, headliner, floor, and armrests are made using recycled PET bottles, plant-based yarns, natural wool yarns, eco-processed leather with plant-based extracts, and bio paint with plant extracts.

Hyundai says the vehicle reflects its commitment to sustainability — materials for interior touchpoints such as its seats, headliner, floor, and armrests are made using recycled PET bottles, plant-based yarns, natural wool yarns, eco-processed leather with plant-based extracts, and bio paint with plant extracts.

The Hyundai IONIQ 5 will be available starting in Spring 2021 (between March and May). Until now, the price has only been revealed for the special edition ‘Project 45’ IONIQ 5, which will likely be the most expensive car in the range, at $63,000.