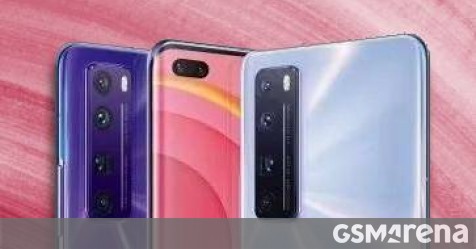 The blurry ad for Huaweis nova 7 series from yesterday is now in sharp focus  this added clarity shows that the quad camera bump on the back isnt a 1:1 copy of the P40 Pro’s setup and also shows just how curvy the display is.

This is likely the Huawei nova 7, which will be powered by the Kirin 985 chipset. It brings 5G connectivity and performance approaching that of the flagship Kirin 990 5G (it seems a bit faster than the 4G version of the 990).

The ad also boasts about the periscope telephoto lens that offers up to 50x zoom, which suggests that its a 5x optical zoom lens. This would be the first time a periscope has been used on a mid-range phone  the Huawei nova 7 is rumored to cost around CNY 3,000 ($425/390).

Comparing this quad cam setup to the P40 Pro, the rectangle on the nova 7 is longer and narrower as the fourth module is placed below the periscope (as opposed to the two row layout of the P40). Anyway, the ad mentions the dual selfie camera, but not its function.

The so-called waterfall display is pretty evident in the image. Huawei still found enough room for a hardware Power key and Volume rocker, which are preferable to Mate 30s tap-based solution.

One thing the ad is missing is a date, but from previous leaks we know that the Huawei nova 7, nova 7 SE and nova 7 Pro will be unveiled on April 23.