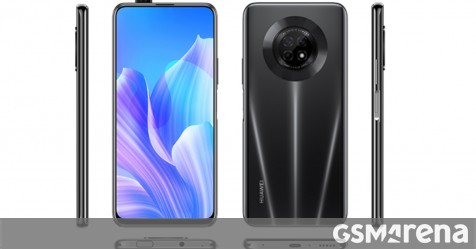 A couple of days ago we found out that Huawei’s upcoming Enjoy 20 Plus smartphone would end up being powered by a MediaTek 5G-capable chipset, and not a Kirin like the Chinese company initially intended. This is because of the new sanctions imposed by the US government that hit the companies making the Kirin SoCs with American technology.

Today a new set of purported official renders showing the Enjoy 20 Plus have leaked. As you can see, the handset is going to borrow the rear camera island design from Huawei’s Mate 30 flagship series from last year.

It’s also got a ‘full-screen’ front, with no notch or punch-hole, because the selfie camera is of the pop-up variety. The power button on the right side houses the fingerprint sensor, so it’s pretty much a given that the Enjoy 20 Plus will employ an LCD screen. We also see the bare left side, the 3.5mm headphone jack on the top, and the USB-C port flanked by a speaker grille and the SIM tray on the bottom.

According to the same source that shared these renders, the Enjoy 20 Plus is most likely to be powered by the MediaTek Dimensity 720 5G chipset, and if so it will be Huawei’s first device to use that silicon.

In the Enjoy 20 line, the Pro model is already official, and it went with the Dimensity 800. There should also be a vanilla Enjoy 20 down the line.