How the Nazis Put the First Manmade Object into Space 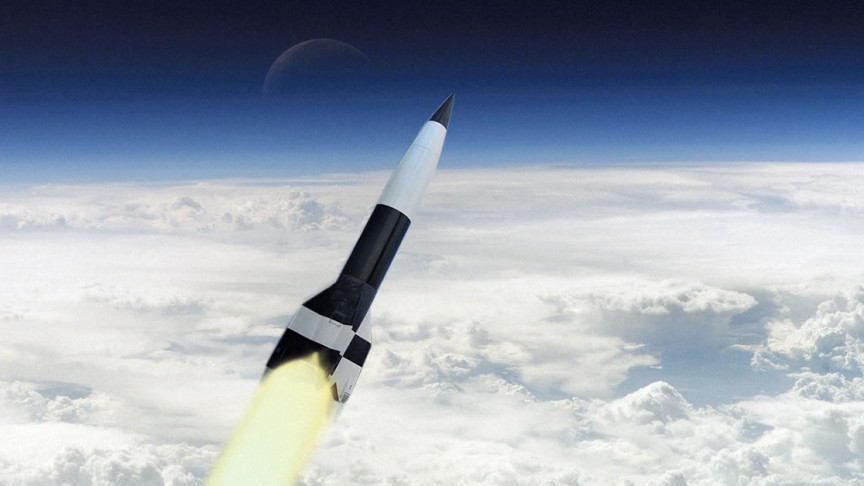 The internet is awash with stories of Nazi innovations and technological prowess during World War II. Some are true, but others like Nazis building a base on the so-called “Dark Side” of the Moon, are a complete fantasy.

But, claims about “Nazis in space” or the existence of a “Nazi space program” might be, from a certain point of view, technically correct. Read on to find out more about this fascinating piece of engineering history.

RELATED: 7 TECHNOLOGICAL INNOVATIONS THAT CAME OUT OF WORLD WAR II

Was there ever a Nazi space program?

Nazi Germany, despite having what has been described as an incredibly corrupt procurement bureaucracy, was able to develop some of the most advanced weapons of war ever seen.

From the first-ever jet fighter, the Messerschmitt Me 262, to Tiger heavy tanks, IR night sights, and piston-engined fighters like the Focke Wulf FW-190s, they were also able to produce the world’s first ballistic missiles — the much-feared V-2.

The V-2 Vergeltungswaffe 2 (“Vengeance Weapon 2”) was the brainchild of one Werner von Braun, who would later prove instrumental during the U.S. space program during the Cold War. These rockets were built largely by slave labor in underground factories where many would die during the process.

One of several rockets designed under the Aggregat program of ballistic missile development, The V-2 would change history in more ways than one.

Powered by liquid ethanol and oxygen, these rockets were able to pump out a staggering 27.5 ton (25 tonnes) of thrust.

The entire program cost about 2 Billion Reichsmarks, roughly similar to the amount spent by Allied Forces on the atomic bomb. As impressive as these weapons were, they would not prove to be a war-winning innovation.

With such potent machines, it is not implausible that the German’s may have realized the potential for using them exploit space. So, did Nazi Germany ever develop a space program?

The V-2’s inventor, von Braun, actually made some plans to send a German pilot into space. While the rocket couldn’t reach orbit, it could, technically, carry a human being into space on a suborbital trajectory.

Von Braun, and his team, worked on designs in the early-1940s, for a modified V-2 with wings called the A-9 “Piloted and Guided Missile”, the world’s first practical design for a transatlantic ballistic missile. While this design extended the rocket’s range, to be truly space-worthy, it would need a second-stage — the A9/A10 “Manned ICBM”.

Sadly for von Braun and his team, resources and budget were cut from the program in 1943 in favor of producing long-range, guided versions of V-2 rockets (the A4) for the war effort.

Von Braun managed to continue some development and flight tests of the A9 under the cover name of A4b (calling it a modification of the A4).

The tide of war offered a new window of opportunity in August of 1944 when Allied advances forced the Germans to relocate their V-2 batteries further East — out of range of most important Allied targets. The A9 program was hastily re-established.

Test flights followed soon after, with one disastrous test in December of 1944. A second test was more successful and reached 52 miles (85 km) in altitude, and made a successful glide, before one wing fell-off and it crashed back to Earth.

The program was summarily canceled once again. That is, until German scientists, including von Braun, surrendered to Allied forces after the defeat of Germany in 1945. More on that later.

So, did Nazi Germany have a space program? Depending on your definition, the answer can be either yes or no.

Read on and we’ll help you decide.

Did the Nazis ever make it into space?

Yes, they actually did! In fact, Nazi Germany is officially the first-ever nation to ever send a manmade object into space.

However, this does come with a caveat — it all depends on where you define space. This also determines the year in which Nazi Germany managed this amazing world first.

One official limit for the start of space is called the Kármán line. Named after a Hungarian scientist called Theodore von Kármán, who determined, in the 1900s, that the boundary between Earth’s atmosphere and space should be set at 50 miles (80 kilometers) above sea level.

Today, this imaginary boundary is defined by the NOAA at 62 miles (100 kilometers) above sea level. This is a figure also agreed upon by the Federation Aeronautique Internationale (FAI).

However, as National Geographic explains “the Federal Aviation Administration, the U.S. Air Force, NOAA, and NASA generally use 50 miles (80 kilometers) as the boundary, with the Air Force granting astronaut wings to flyers who go higher than this mark.

At the same time, NASA Mission Control places the line at 76 miles (122 kilometers), because that is ‘the point at which atmospheric drag becomes noticeable,’ Bhavya Lal and Emily Nightingale of the Science and Technology Policy Institute write in a 2014 review article.”

Using NASA’s own figures, the first artificial object to enter space was in fact a piece of Nazi engineering.

The V2 was launched from a test stand at the Peenemünde Airfield, Germany. Certain German officials were so struck by the event that one, General Walter Dornberger (Director of the “Vengeance Weapons” program), is claimed to have stated, “Today, the space age is born!”.

Impressive, but whether or not you would classify this as reaching space depends on where you define space as starting. If you prefer the 62 miles (100 km) limit, then later vertical V-2 tests in June 1944 (notably MW 18014) would claim the accolade.

What role did Germany play in the space race?

After the defeat of German forces in the European theatre, many former German scientists surrendered or were captured by the Allies under various operations, including the famous “Operation Paperclip”. These scientists, including von Braun, were swiftly ferried to the United States, Soviet Union, and the United Kingdom, to aid in work in similar fields (like the Manhattan Project and the fledgling US and Russian ballistic missile and space programs).

Von Braun, in particular, would prove to be a very valuable acquisition for the United States. Both the US and the Soviets immediately took the V-2s apart and began experimenting to improve and recreate them. In 1946 shortly after the war, several captured V-2 rockets were used to make some world-firsts in space exploration.

These included, among others:

But, all of these test-runs merely touched space. Soon after the Soviet Space Program delivered the first orbital spacecraft Sputnik 1 into space, the US would begin ramping up their efforts.

The space race had officially begun.

By 1953, von Braun and his team had developed America’s first ballistic missile, the Redstone. This rocket could carry a nuclear warhead up to around 250 miles (402 km) in range.

Later, the Jupiter-C, a modified version of Redstone, was used to launch the United States’ first-ever satellite, Explorer 1, in 1958. von Braun would later become the director of NASA’s Marshall Space Flight Center.

It was there, thanks to the labors of other German scientists like Werner Dahm and Konrad Danneberg, that the now-famous Saturn V rocket was eventually developed.

This is the very same type of rocket that took  America’s first astronaut, Alan Shepard, into space in 1961, and would later take the first astronauts to the Moon, in 1969. A number of former-Nazi scientists, including von Braun and Kurt Heinrich Debus, would prove pivotal in making this mission a success.

While not all of the accomplishments of the United States’ space program were the work of former Nazi Germany scientists, they would prove to be instrumental in getting the program off the ground, literally and figuratively.