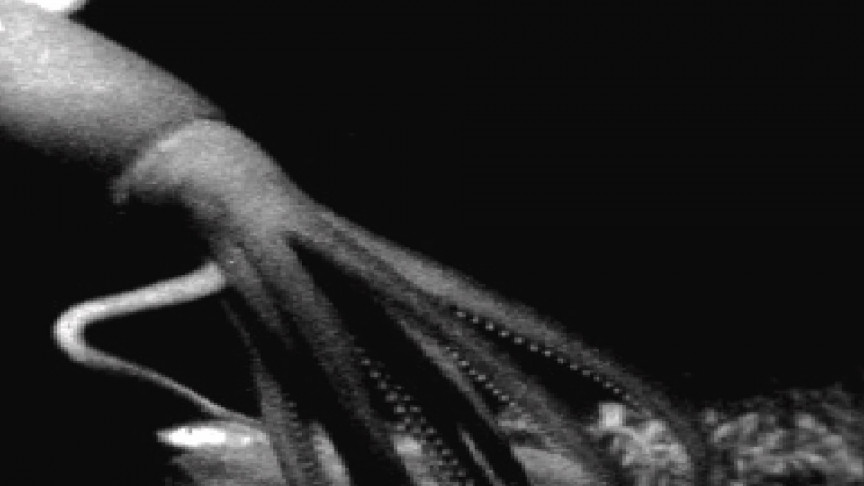 Although you have probably heard of deep-sea squids, it’s unlikely you have seen these large and very shy creatures. This is because these animals have very large eyes (about the size of a basketball) that cause them to spot any upcoming submersible that is trying to film them in action.

Luckily for us, scientists came up with a new way to approach these beasts of the sea.

“The legend of the “Kraken” has captivated humans for millennia, yet our knowledge of the large deep-sea cephalopods that inspired this myth remains limited. Conventional methods for exploring the deep sea, including the use of nets, manned submersibles, and remotely operated vehicles (ROVs), are primarily suited for studying slow-moving or sessile (immobile) organisms, and baited camera-traps tend to attract scavengers rather than predators,” write the researchers in their abstract.

So what did the scientists do to overcome these issues? They combined low-light cameras, red illuminators (deep-sea creatures are blind to wider-wavelength red light, they are equipped to detect blue better which can be found on almost all human-made vessels as standard-issue for navigation and safety purposes), and bioluminescence-mimicking lures. The lures were mimicking the movement and glow of a bioluminescent jellyfish, a preferred meal of the deep-sea squid.

They called these lures E-jellies and they located them on the end of an outstretched arm. This resulted in the squid reaching out to grab its prey which allowed the scientists to measure the length of the species’ tentacles which were calculated to be a whopping 6 feet (1.8 m) long.

They called their new squid hunting ship the Medusa and it proved very successful at capturing deep-sea squids in their natural environment.

“As an example of the value of this technology for filming large deep-sea squid, on the first deployment of the Medusa with the E-Jelly attached in the deep waters off the coast of the Ogasawara Islands, Japan it recorded the first video of a live giant squid in its natural habitat (Widder 2013),” wrote the researchers in their study.

“During that expedition, four additional sightings of giant squid were made from the Medusa plus one sighting from the Triton 3300/3 submersible, also outfitted with red light illuminators and a bioluminescence-mimicking lure.”

The researchers share many images of the animals in their study and each is as exciting and terrifying as the other. Particularly noteworthy are the images of the squids reaching out for the E-jelly. We know we would not want to be close by when these giants of nature decide to hunt!