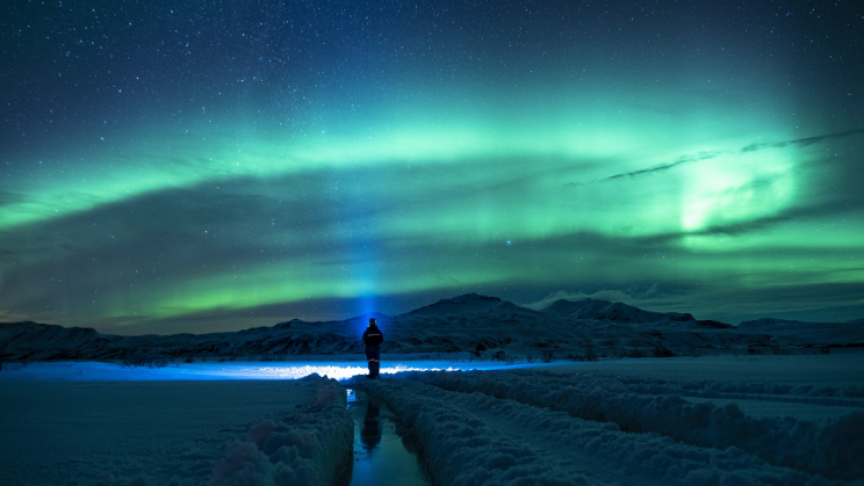 On the night of September 10, 1580, an Italian doctor working in the court of the Hungarian Prince of Transylvania witnessed a light show in the sky he would later describe in a book entitled “De coeli ardore,” Latin for “celestial fire.”

That doctor was Marcello Squarcialupi, and his dusk-to-dawn observations are regarded as the world’s first written scientific account of the aurora borealis, a phenomenon more commonly known as the northern lights.

The account is both unique and historically significant in its insistence that the lights were a naturally-occurring phenomenon like any other in the atmosphere, and not a product of divine miracle or demons or wizardry, as they were often interpreted at the time. It is also enchanting in its beauty:

“In the first hour after sunset, in the fair sky in the north, whilst the new moon provided deep darkness, a faint, whitish light appeared. … The light became so strong, that objects cast shadows. … flames appeared in various places, distant from the light-coloured field. … Colours radiating from the light field were similar to sun rays radiating through openings in a cloud cover. … just before midnight, these beautiful purple spots grew so large as to look like the sky was dyed by gushing blood.

The pyramidal red rays, yellow and purple colours erupted repeatedly, quivering like flames. … Finally, in the north, appeared an intense arc, purple in full, looking like a mountain in the sky, wide at the bottom, peaked at the top.”

More than 400 years later, we now understand the mechanisms behind the auroras, which, when they occur in the Southern hemisphere, are called the aurora australis. We’ll use “auroras” to keep things simple — though we will dive into some interesting differences between the two later on.

How auroras are formed

It was Norwegian scientist Kristian Birkeland (1867-1917) who first suggested that the auroras had something to do with electromagnetic activity coming from the Sun. While his theories were strongly contested during his lifetime, he has since been proven right. The auroras’ origins lie in the intermingling of charged particles from the sun and the atmosphere of the Earth.

The Sun emits more than just the light we can see, it also emits the solar wind, a stream of charged particles — mostly protons and electrons — that spread out to the rest of the solar system in long, billion-mile arcs. This wind carries with it some of the Sun’s magnetic field and creates what is often referred to as a type of space weather that can drastically affect a planet’s atmosphere.

The Sun’s outer edge, the corona, is a particularly dynamic region that is largely responsible for this “weather”. Its turbulent plasma pools and gigantic magnetic loops carry this charged-particle plasma, heated to the point where it can no longer be contained by the Sun’s gravity, out into the solar system.

While the name may sound quaint and even poetic, the solar wind shoots outward from the Sun at speeds of more than 500 miles per second (800 km/s) and at temperatures of around 1,000,000 degrees Fahrenheit (800,000 Celsius).

(Fun fact: It’s this wind that is responsible for the iconic flow of the tails of comets, as the heat from the sun vaporizes the frozen gases that make up the comet and allows dust and other particles to stream off, resulting in two tails: a plasma and a dust tail. The plasma, or gas, tail consists of charged particles swept along by magnetic fields embedded in the solar wind while the dust tail is pushed out into a curved shape by radiation pressure.)

A few days after the solar wind leaves the surface of the Sun, this eruption of charged particles reaches Earth. If that sounds intense, that’s because it is — Were it not for our planet’s magnetosphere, the solar wind would strip off the Earth’s atmospheric layers that protect us from the Sun’s ultraviolet radiation.

Scientists believe that, because Mars lost its own magnetosphere around 4 billion years ago, the planet’s atmospheric layers were stripped off, leading to the rocky, barren landscape that we see today.

The Earth’s magnetosphere comes from its core, which has two parts. The solid, inner core, is composed mainly of iron and nickel. This is surrounded by a molten, outer core also composed of nickel and iron. This outer core of hot metal is in a swirling state of convection that results from radioactive heating. This creates a system that you can think of as nature’s way of building an electrical generator. The cooling and crystalization of iron in the core help create incredibly powerful electric currents that generate a magnetic field reaching far beyond Earth’s atmosphere and out into space. As the solar wind approaches our planet, most of it is deflected and redirected by our planet’s magnetosphere.

This magnetic shielding isn’t impermeable, however, and a small amount of the solar wind frequently manages to get through to the Earth. It does so by hitching a ride on the magnetic field and following it up and down to each of the Earth’s magnetic poles, which roughly (by a difference of 800 miles (1,300 km) or so) correspond to the geographic poles.

The area around the poles these charged particles (ions) end up reaching is called the ionosphere, which forms the boundary between the vacuum of space and the lower atmosphere.

When the ionosphere absorbs the energy from the inbound solar wind, the Sun’s particles interact with oxygen and nitrogen in the ionosphere. This is really what causes the lights of the auroras. The gases in the Earth’s atmosphere become energized by the Sun’s ions, but only for a brief period, giving off the stored energy from those ions in fantastic flashes of light — auroras.

It’s only when billions of these collisions take place that we see the sky-wide light shows that auroras are known for. Different gases give off differently-colored auroras. Oxygen produces the auroras’ iconic greenish-yellow and red hues, while nitrogen emits a red or blue light that can often appear in shades of purple — just like the auroras that Squarcialupi saw on that September night in 1580.

Where and when auroras can be seen

Because auroras result from the mixing of charged solar particles and the Earth’s magnetosphere driving them to the poles, the best place to see them is in the high-latitude areas of both hemispheres. Canada, Iceland, Norway, and Finland are great spots for seeing the aurora borealis, while parts of Australia, New Zealand, and the continent of Antarctica are some of the only places to witness the southern lights, the aurora australis.

The area that auroras normally occur in is called the auroral ring, and while it’s true that the chances of seeing them increase the closer to these rings you get, there are times when the aurora borealis will extend farther south (and the aurora australis farther north) than usual.

While the aurora borealis and aurora australis come from the same, symmetrically aligned magnetic field, that field can bend and shift depending on the strength, intensity, and angle of the solar wind approaching it.

In a 2018 study published in the Journal of Geophysical Research: Space Physics, researchers suggest that when the solar wind disturbs the Earth’s magnetosphere at just the right angle, our magnetic field bends and twists to a degree that pushes the auroras to different locations in the Northern and Southern hemispheres. This asymmetry is short-lived, with the Earth’s magnetic field disengaging itself from the solar wind to regain symmetry.

The Sun’s magnetic field is not equally active at all times. Our star regularly goes through what’s called a solar cycle, an 11-year process wherein its magnetic field actually flips, with the polarities in both hemispheres reversing to their opposite. The beginning of a solar cycle is marked by a low number of sunspots, and it’s at this point that the Sun is least active, meaning lower odds of strong aurora shows here on Earth.

Our current cycle, Solar Cycle 25 (cycles have been tracked since 1755, when extensive recording of solar sunspot activity began), started in 2020. Scientists at the National Oceanic and Atmospheric Administration predict that the solar cycle will peak in July 2025, meaning auroras will be more likely to occur during this time.

Intense solar storms, which significantly increase the amount of charged particles emanating from the Sun, can even result in auroras reaching as far south as the tropics, as they did in the infamous Carrington Event of 1859. That event was the result of a geomagnetic storm which had its origin in at least one coronal mass ejection, and led to widespread disruption of electrical services around the world.

Geomagnetic storms are significant disturbances in the Earth’s magnetosphere. They result from events like solar flares, or their more intense cousins, coronal mass ejections.

As its plasma flows and churns, the Sun’s magnetic field can get “tangled up” in itself. In order to return to a more “relaxed” state, these twisted and knotted magnetic regions known as flux ropes realign themselves, snapping off huge amounts of energy and plasma that race out into the solar system.

Solar flares and CMEs are similar in that they often occur at the same time and result in huge amounts of particles being hurled through space, but this is where their similarities end.

Solar flares are intense releases of high-energy electromagnetic radiation. The large amounts of energy released is capable of accelerating high-energy particles that can have an effect on the Earth’s ionosphere. GPS and radio signals travel through the ionosphere, so any change to its composition can affect those signals, and solar flares can even result in complete blackouts in navigation and communication systems. However, solar flares impact Earth when they occur on the side of the sun facing the planet.

CMEs, on the other hand, are more substantial. They are more like a giant wave or cloud of magnetized solar plasma that has been shot out at over a million miles per hour. These clouds can erupt in any direction, and then continue on in that direction. However, CMEs will only impact Earth when the cloud is aimed in our direction.

Because of their intensity, CMEs can distort Earth’s magnetic field, oscillating it in such a way that electrical currents are created in utility grids on Earth. If these grids aren’t properly prepared for such an event, the currents can overload the grid to the point of failure.

It’s for this reason that NASA has a fleet of heliophysics observatories in space. When it looks like a CME is on its way to Earth, airlines, power companies, and other relevant parties are notified so they can protect the necessary infrastructure.

At the end of October, the NOAA issued a warning for a potential geomagnetic storm resulting from an X1 solar flare that is believed to have been accompanied by a coronal mass ejection that occurred on October 28th. The G3-class geomagnetic storm that resulted seems not to have had an impact on technology on the ground. While analysis is still ongoing, the flare-CME combination resulted in some spectacular auroras seen from Finland, Russia, and Iceland.

Scientists are still learning a great deal about the electromagnetic relationship between Earth and the Sun, and we’re likely to discover some fascinating things about this interaction in the coming decades. It’s truly inspiring to think how far we’ve come in understanding them since Squarcialupi wrote his account in the 1500s.

From our perspective in history, we can see that the physics behind the auroras, along with the dedication of those who are striving to work out how those systems function, are as compelling as the ethereal beauty the lights themselves are known for. Squarcialupi was not the first to marvel at the auroras, but his words and his message remain a superb reminder that the material and the transcendent are so often bound up in one another. It’s something we’d all do well to keep in mind.