How Do We Build Cities on Mars? 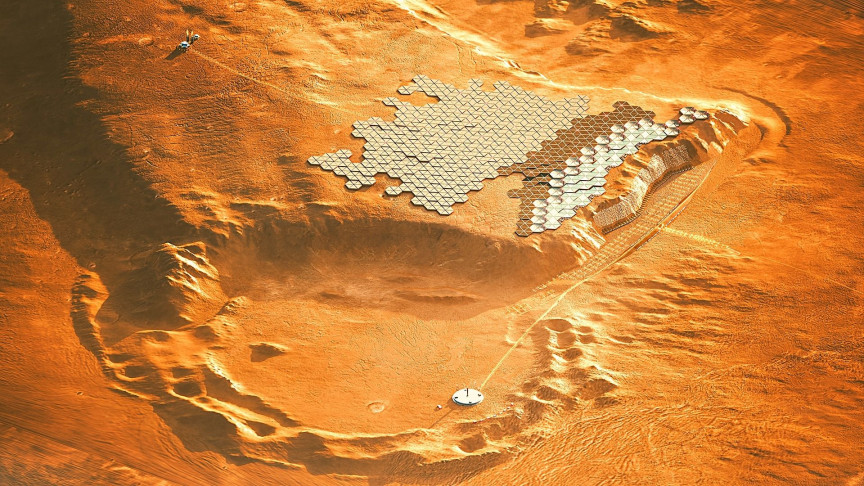 Centuries ago, Sir Isaac Newton said of his many discoveries that if he’d seen further, it was only “by standing on the shoulders of giants.” In the 21st century, space-faring companies and nations may soon have a similar feeling creeping up their spines as they transplant the bleeding edge an entire scientific system to seed the first human cities of Mars.

This titanic effort will involve scientific fields so advanced that some have yet to mature. “There are some critical technologies that are still not solved. One of them is tunneling — one of the most important factors — you have to have the right tunneling solutions,” said Founder and Head of the architectural team at ABIBOO Alfredo Munoz in a visual interview with Interesting Engineering.

And inside these tunnels, ABIBOO plans to install huge buildings connected into larger “macrobuildings” through networked tunnels bored into the face of Martian cliffs. But before the digging starts, technology needs to catch up to the theory, ideal locations need scouting, we need to transport construction teams and equipment, and produce sustainable materials from the Martian environment. In short, we have to build cities.

“We have to be able to transfer initial goods — Elon Musk, SpaceX, and other entities will be critical because Nüwa City is just the beginning of a larger-scale operation,” said Munoz. But before the 250,000 residents can move in, the initial team of space engineers will have a colossal challenge. “We only have a window of opportunity every couple of years, and to take the city to critical mass, we’ll require high, exponential growth until we have the technology for transportation.”

The first city on Mars will be called Nüwa, and involve 32.8-ft (10-m) diameter tunnels — “even with today’s technology it could be solved.” For decades, the most challenging problem of conceiving a colony on Mars involved moving enough materials to another planet. While a substantial amount of fuel and money might be saved by launching a mission to settle Mars from the Moon, it’s not very feasible to move enough material for even a few city blocks the roughly 34 million miles (54.6 million km), at minimum, to the Red Planet.

Crucial to the Nüwa City project is its fundamental design, “to be constructed and operated with few resources brought from the Earth. We need to produce materials on Mars — that’s why we have five different cities — the total amount of resources cannot be obtained in one location.” On Earth, sustainability means not wasting energy or resources when you can achieve the same or similar goal locally, without polluting the environment. “Why do we want to bring materials from Bali to New York when we can manufacture in New York?” asked Munoz, rhetorically. It’s “not only about not damaging the environment — but also doing a lot with a little.”

The trick is to build the city on Mars “without damaging the water we’re going to use, and in an economical, scalable fashion,” said Munoz. “It’s not only about the environment but using it wisely,” said Munoz.

However, for any city to thrive (on Mars or Earth), you need a lot of water and carbon dioxide (CO2). “Steel is the most-used material for the civil construction of the city. Another element essential on a critical path for Nüwa is transformation and manufacturing of oxygen,” Munoz continued. While there have been many proposals to generate oxygen with vegetation, for Alfredo and ABIBOO, this isn’t enough to support a human city. “Based on what life support systems we analyzed, [vegetation-generated oxygen] won’t be enough alone.” NASA’s Perseverance rover will carry out experiments to test several methods of procuring oxygen on Mars. ABIBOO’s “core scientists were thinking about transporting used air and breathable air — […] it’s almost the same idea as a refrigerator.”

“Most of the hard work via civil engineering would be done by robotics,” but “it would not be possible for humans to do [all] the labor of work — they can supervise robotics,” said Munoz. While building into the side of a cliff with robots on Mars isn’t a new idea, ABIBOO’s plan for what to install in the tunnels, is. “Macrobuildings is basically a term we created — a really large building comprised by modules, where every module is a building unto itself.” Kind of like gigantic LEGO blocks, with central heating.

‘Macrobuildings’ designed to nullify every challenge on Mars

Each macrobuilding will be half a mile (800 m) wide, 656 ft (200 m) high, and 492 ft (150 m) in depth — roughly the width of Central Park, in New York City. “Every macrobuilding is comprised of 12 modular buildings — each of which are made of 3D tunnels that interrelate in tunnels,” explained Munoz. But this isn’t a plan to repeat the cookie-cutter aesthetic of gentrified neighborhoods. “Every module is different from another,” using 12 different models to switch up the pattern and create a unique architecture.

Functionally, the megabuildings will incorporate workplace and residential modules — mixed, but conceptually so, with some more residential and others more commercial. “Each macrobuilding is different from the others,” which makes for a “huge diversity because none is the same as another.” The arrangement of the modules isn’t set, since the tunnels will connect in varying relationships, calling for a unique solution to each macrobuilding.

The decision to build into the side of cliffs is an educated one, because, on Mars, problems abound. Awash in solar radiation, the cliffs can provide a natural shield to levels of radiation higher than anywhere on Earth. Another problem is air pressure (or, the lack of it). “[I]n contrast with problems on Earth where buildings fall, on Mars, buildings can explode because of the pressure. Humans and animals need little more than 0.7 times atmospheric pressure” of Earth’s at sea level. “We have 80% atmospheric pressure inside the buildings,” and in a Martian atmosphere, if you continually inflate a balloon toward this internal pressure, “at some point it will explode.” That would make for a bad ending to any city on Mars.

“The bigger the building, the more pressure — the amount of the structure we need for the building increases as well as tethering it to the ground,” since, if a building contains air with higher pressure than the external atmosphere, eventually it will lift up into the Martian sky. This means that manufacturing chemicals will have to happen inside of thick silos, to avoid an explosion from the pressure differential. Other problems on Mars include the lower gravity and the loss of thermal heat to the external environment. By building underground, “you solve many of those problems,” said Munoz.

Nüwa could become the most advanced city ever built

However, growing up in a cave underground is not ideal for emotional well-being, and probably won’t motivate most to make the move to Mars. “So we have inverted it 90 degrees. Everything is underground, and since we have access to the other side of the cliff, we can penetrate the cliff and bring in direct light, while also fully protecting people from some of the challenges.” The vegetation for food can be grown above the city, on a mesa for a “huge concentration of energy for plants. Humans are not allowed inside and plants don’t need a lot of pressure.”

However, there have been other proposals to build cities into the cliffs of Mars in the last decade. One concept from the Mars City Design competition in 2016 took a cue from the antic city of Petra in the Jordan desert. But ABIBOO’s proposal takes this a step further. “It’s not common to provide a solution on Mars that has the back-up of every realistic solution in fields from life-support systems, planetary geology, astrophysics, space engineering, biology, artists, architects, astrobiology, experts in mining, psychology, space law,” and more. In Nüwa and other future Martian cities, ABIBOO aims to use architecture as a means of building a creative identity, mixing science and art, “so we can create a more emotional connection with where we live.”

In late March, ABIBOO estimated construction of Nüwa City might start by 2054. But until we can put astronauts on the surface of Mars, it’s difficult to predict when things can go forward with certainty. “All critical paths start in the lab — [it] sounds realistic to say we could start in 2054, but it depends on these other parts. If one of them is delayed, then all are,” explained Munoz. For example, if CEO SpaceX Elon Musk decides to delay plans for Mars, then ABIBOO may change strategies. “We need to rely on analyses done by previous astronauts that are on Mars — we can’t develop Nüwa City until we find the right location.” But once construction finally starts, the most technologically advanced human city may have a change of address, one-way: from Earth to Mars.