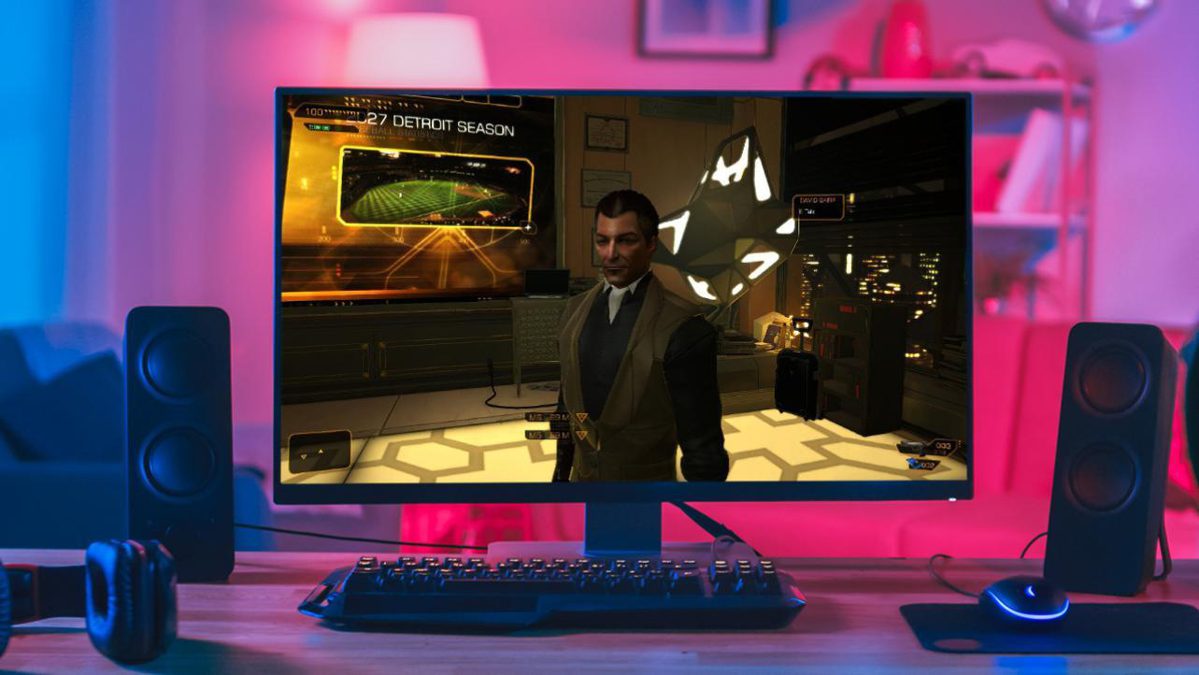 A few weeks ago, we wrote about Daikatana, John Romero’s much-derided Doom and Quake follow-up that turned Ion Storm from the hottest ticket in town to an industry-wide joke. But while the company’s Dallas penthouse office was struggling to finish Daikatana, the smaller Austin studio was getting ready to drop a game that really would change the FPS genre forever. This is the story of Deus Ex.

Warren Spector wasn’t part of Romero’s original clique at id. Instead, he came to gaming through a circuitous route that began in film school, where he wrote his thesis on Warner Brothers cartoons, and then through tabletop at Steve Jackson Games and TSR.

In 1989 he was hired at Origin as a producer, working on Wing Commander and the Ultima series, then moved to Looking Glass to work on Thief. But he had bigger dreams: a game called Troubleshooter, set in a cyberpunk conspiracy world that would let players truly blaze their own paths through the narrative.

Unfortunately for Spector, the cards just weren’t in play to make Troubleshooter—later renamed Junction Point—a reality. Spector bailed from Looking Glass and was about to sign a contract with EA when Romero came calling with an offer he couldn’t refuse: a massive budget and high-end marketing behind the game of his dreams. Ion Storm had a six-game deal with Eidos and money to burn, and Romero, impressed by Spector’s portfolio, wanted him on board.

Ion Storm Austin immediately picked up the game, hiring a half-dozen former Looking Glass employees to form the core of the studio. They immediately drank the Kool-Aid that Spector was pouring about a totally new kind of first-person shooter.

While at Looking Glass, Spector found himself chafing against the restrictions that the in-development Thief put on the player. Protagonist Garrett could strike from the shadows with deadly force, but in direct combat he folded like a wet napkin. Spector wanted to create an experience where combat and stealth were equally viable, along with any other choices the player wanted to make. In 1999, he’d written an article for Game Developer that served as a sort of unofficial manifesto.

Development of the game wasn’t easy, though. Spector had recruited designers with traditional role-playing experience, as well as the guys from Looking Glass who were more versed in 3D first-person simulations. Getting them to work together—especially writing lead Harvey Smith and head programmer Chris Norden—was a struggle. Smith had huge ideas for the narrative, which Norden would have to reel in to what was plausible with late 20th century tech. In the end, though, they formed a strong bond that showed in the software.

The key tenet of Deus Ex was that the player actually had agency in the world, and characters would respond differently to them depending on what actions they took. If they caused chaos and killed NPCs indiscriminately, things could get very bad for them very quickly. Ion Storm Austin did extensive playtesting throughout development, filing off rough edges and making ways for players to meaningfully express themselves using the game’s tools.

The end result was a title that took lessons from previous huge hits in multiple genres and combined them into something completely new.

Play It Your Way

Deus Ex casts players as JC Denton, a United Nations anti-terrorism agent who becomes embroiled in a vast conspiracy to take over the world with the aid of a nanotechnology-derived plague called the Gray Death. Multiple factions are working to turn the pandemic to their own ends, and by the end of the story Denton must ally with one of them, changing the course of world history.

But it was the journey that made Deus Ex special. Broken into a series of self-contained missions, the narrative dispensed with the traditional point A to point B of first-person shooters. You could wander around environments at leisure, talking to NPCs, interacting with objects and exploring freely. Denton had a job to do, but how he did it was completely up to the player.

You could go in guns blazing, depending on your reflexes and your tactical intuition to outshoot your foes. Or you could opt for stealth, evading conflict entirely as you stuck to the shadows and vents. You could hack terminals, talk your way out of trouble, and think outside the box—and many of the choices that you made along the way would come back to haunt you later.

Even more notably, there was no time limit or other pressure. If you didn’t feel like infiltrating a facility or taking out a target, you could just exist in the world. One of Spector’s key goals was to make the game’s levels feel like real spaces, not stage sets on which action would incidentally happen. Locations were modeled from real life, for the most part, and at one point in development Spector planned to replicate the entire interior of the White House.

Obviously not all of the team’s big plans made their way to the screen, but it’s a testament to Ion Storm’s faith that they let production continue long after Deus Ex was originally due.

The game was an immediate success, winning dozens of year-end awards. It sold decently in the United States but exceptionally well in Europe, eventually moving over a million units worldwide. But more importantly was how it showed other developers that the bar had been raised.

It’s indisputable that what we consider the modern “sandbox game” wouldn’t exist without Deus Ex. Spector’s unique fusion of action, role-playing, and adventure was one of a few deeply influential games that showed the promise of living, complex worlds inside your computer.

That said, it wasn’t an immediate recipe for success. Deus Ex: Invisible War hit stores in 2003, with most of the original team on board. Unfortunately, publisher Eidos hung a big ask on Ion Storm: the game needed to play not just on PCs but on the new Xbox console as well. That forced the team to streamline systems and build smaller environments.

Ion Storm would close down a few years later, leaving the franchise to lie fallow until 2011 when Eidos Montreal revived the series with the wildly successful Deus Ex: Human Revolution. The thing with the sequels, though, is that they just did more of the same stuff as the original game—mowing the lawn where Deus Ex blazed new trails.

The problem with making a sandbox game like Deus Ex is that when you give players meaningful choices, those choices mean that the game needs more content. And some of that content is stuff that a player will never see in a single playthrough. It’s a tough sell for a publisher.

The market pivot to multiplayer, esports, and “games as a service” that prioritize replayability over storylines, combined with rapidly ballooning budgets in the AAA space, has led to barely a handful of this kind of experience being released every year. These games are expensive to make and don’t have a long tail that can keep players paying for DLC and microtransactions.

Warren Spector was lucky enough to land at Ion Storm when they were flush with cash, enabling him to float a grand experiment that let him take big risks with game design. It’s seeming less and less likely that kind of opportunity will ever come up again.