Hot Sand Can Save Extra Energy From Wind and Solar Power 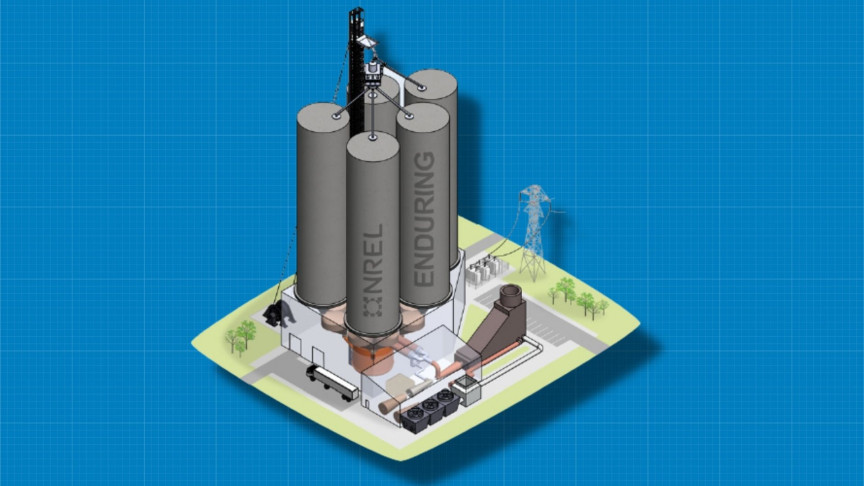 One of the main Achilles’ heels of renewable technology is the reliable storage of excess juice when generation exceeds demand. Many solutions are currently in development with one recently announced solution particularly interesting.

Thankfully, researchers at the National Renewable Energy Laboratory (NREL) have recently unveiled their new thermal energy storage technology that uses hot sand to store energy — just like a battery. Called the “Economic Long-Duration Electricity Storage by Using Low-Cost Thermal Energy Storage and High-Efficiency Power Cycle“, ENDURING for short, this could prove to be a game-changer for making renewable technology far more reliable in the future.

The system takes excess energy generated from wind and solar power and uses it to superheat silica sand. This innovative technique, if successful, would prove to be revolutionary for the renewable industry.

For anyone who has walked on a beach during the height of summer (especially in sun-soaked locations) will know silica, or sand, is very good at retaining and conducting thermal energy. This new system exploits this exact property by gravity feeding sand through a heater that then heats the sand particles to in excess of 2,192°F (1,200°C).

Once the sand is heated, it is then fed into an insulated silo made of concrete for storage. When the stored energy is needed again, the sand is fed into a heat exchanger than then pressurizes gas to power turbomachinery and spin generators to produce electricity again.

The storage silos can be scaled up or down depending on the need for energy but in most cases will likely be a few stories tall.

The beauty of this system is that it can be hooked up to the grid and can be placed on decommissioned coal or gas plants. Researchers behind the project explained that stored thermal energy can be discharged during periods of peak energy demand when wind and solar tend to have relatively low yields (like early in the morning or at night).

This is the time when most people are at home using their multiple appliances at the same time.

ENDURING could help phase out coal and natural gas

According to the NREL, even a single ENDURING system should be able to store as much as 26,0000 MWh of thermal energy. To put that into perspective, a report from the U.S. Nuclear Regulatory Commission states that “for conventional generators, such as a coal plant, a megawatt of capacity will produce electricity that equates to about the same amount of electricity consumed by 400 to 900 homes in a year.”

Zhiwen Ma, a researcher of the ENDURING project believes that this technological innovation should make a big impact on replacing more traditional heating fuels like coal or natural gas.

What’s more interesting is that such systems should also be relatively cheap to build. Sand costs around $50 per ton, making it considerably cheaper than the raw materials for making lithium batteries. Extracting and sourcing sand is also considerably better for the environment.

Silica (sand) also happens to be one of the most abundant substances on Earth — which is handy. Another ENDURING researcher, Patrick Davenport, agrees with Ma’s conclusion. He also believes that the system could help phase out less sustainable energy sources.

“Sand and concrete silos with refractory insulation are very inexpensive materials that can lead to low-cost energy storage,” he said in the press release. “Traditional four-hour storage technologies don’t scale well to the grid or city scale,” he continued, referring to battery storage. “Now that we are in need of large-scale energy storage, this technology makes a lot of sense.”

A prototype of the ENDURING system is currently being tested at an undisclosed location according to the PV magazine. ENDURING is certainly an interesting development in the field of energy storage and one to keep an eye on going forward.