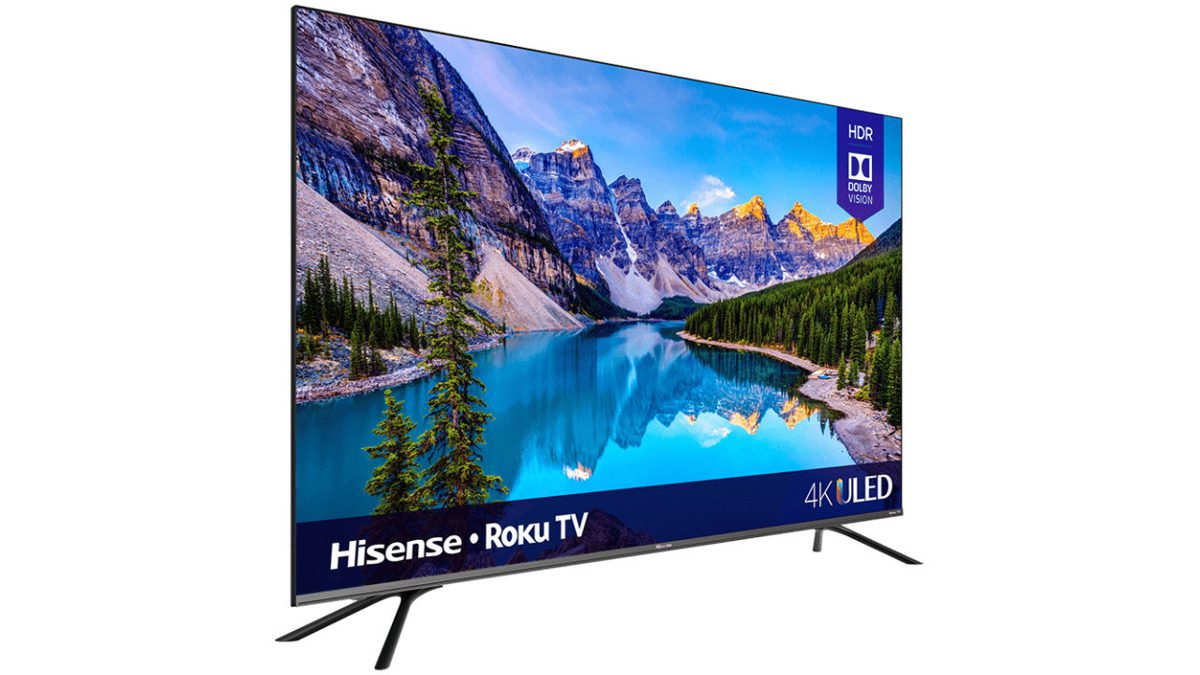 Unlike most TV manufacturers, Hisense doesn’t embrace a single smart TV platform, instead offering your choice of Android TV or Roku TV. The Hisense R8F is the Roku TV version of the H8F, with the same strong picture quality and input lag bundled with a Roku-based interface instead of Android TV. The two TV lines also share the same light bloom issues, which are easily forgivable considering the budget-friendly asking price (the 65-inch 65R8F we tested is available for $649.99). Roku TV isn’t filled with quite as many features as Android TV, but it’s simpler to use while still packing a massive selection of streaming apps and services. Either Hisense line punches well above its weight in contrast and color, and is worth your attention if you’re looking for a capable 4K HDR TV for a low price.

The R8F is physically identical to the H8F, with a striking, almost bezel-free design with an edge-to-edge glass panel framed by a tiny 0.2-inch black border on the top and sides, and a 0.7-inch gunmetal bezel running along the bottom edge. The bottom bezel features a Hisense logo in the middle, a Roku TV logo on the right, and a small protrusion under the left corner for the infrared remote sensor. It’s a very premium look, comparable with high-end LG and Samsung TVs. The screen sits on two V-shaped gunmetal legs that can be attached near the center or near the sides of the bottom, providing flexibility if you have a table or shelf that’s slightly narrower than the screen.

Besides the power connector on the right side, all inputs sit on the left side of the back of the TV. Three HDMI ports, a USB port, an optical audio output, an antenna/cable connector, and a pinhole reset button face directly left, while a fourth HDMI port, an Ethernet port, an RCA composite video input, and a 3.5mm audio output face directly back.

Instead of the button-laden wand of the Android TV version, the R8 comes a standard Roku TV voice remote. It’s a small, black plastic bar with Roku’s signature plus-shaped direction pad near the top. Home, Back, and Power buttons sit above the direction pad, along with a pinhole microphone. Playback controls and dedicated service buttons for ESPN+, Hulu, Netflix, and the Roku Channel sit below the pad. A volume rocker and mute button can be found on the right edge of the remote.

As a Roku TV, the R8F offers the same selection of apps and streaming services as any other Roku TV, or any Roku media hub like the Roku Ultra or Roku Smart Soundbar. Nearly every big name in video can be found, including Amazon Prime, Apple TV, Disney+, Google Play Movies & TV, Hulu, Netflix, Sling TV, and YouTube. Music is also represented well, with Amazon Music, Spotify, SiriusXM, and Tidal, along with plenty of internet radio apps.

Roku continues to lag behind the Amazon Fire TV and Android TV platforms, along with LG’s and Samsung’s smart TV platforms, in terms of non-entertainment features. While the included remote has a built-in microphone, it’s used almost exclusively for voice search of content; you won’t find any voice assistants like Amazon Alexa or Google Assistant on the TV (though you can control the TV with either if you have a smart speaker).

Don’t expect to control any smart home devices on the TV, either. Of course, this is only a knock if you want to use the R8F to control home automation, answer non-entertainment questions, or otherwise do things that aren’t watching TV. The important apps and features are all here for using the TV as a TV.

Like the Hisense H8F, the R8F is a 4K TV that supports high dynamic range (HDR). It can play HDR10, Dolby Vision, and Hybrid Log Gamma (HLG) content.

Curiously, contrast performance varied very little between a standard definition signal with the TV in Movie picture mode and an HDR10 signal with the TV in HDR (Dark) or HDR (Bright) picture modes. In fact, contrast was highest with the SDR signal, with a peak brightness of 483.886cd/m2 for a full-screen white field, an 807.601cd/m2 peak brightness for an 18-percent white field, and a black level of 0.014cd/m2 for a contrast ratio of 57,686:1. The HDR picture modes showed slightly lower peak brightness but otherwise demonstrated similar performance for an excellent mid-five-digit contrast ratio. In all cases, the R8F shows slightly better contrast than the H8F.

Unfortunately, the R8F also shares the H8F’s tendency toward heavy light bloom. We recognized some hazy auras in black fields around white patterns, which the H9F and its higher number of active lighting zones significantly reduce.

The above charts show an SDR signal compared with the Rec.709 broadcast standard color gamut on the left and an HDR10 signal compared with the DCI-P3 color gamut on the right, with the TV set to the warmest color temperature for both modes. Whites and primary colors were spot-on accurate out of the box in either case, showing even better color performance than the H8F. This performance doesn’t apply to off-angle viewing, though; the colors start to fade and distort a bit when you move to the left or the right from the dead center of the screen.

The BBC’s Planet Earth II looks excellent on the R8F. Colors are bright and vibrant, with the greens of plants and blues of water appearing natural and not cartoonish or oversaturated. Fine details in fur and bark can be clearly seen both when in direct sunlight and in shade. It’s a warm, balanced look that serves nature documentaries well. The red of Deadpool’s costume in Deadpool looks accurate and saturated, even in the overcast lighting of the opening scene. Skin tones also look natural under the fairly cool light of the highway fight. The fires in the burning lab fight look bright and colorful, with plenty of oranges and yellows flickering. Shadow details can also be clearly seen in the frame even as the flames burn, though the light bloom can cause those details to seem a bit lighter than ideal.

The Great Gatsby also shows the R8F’s strong contrast performance. The textures and cuts of black suits in the party scene can be clearly distinguished, while the bright white balloons and lights pop on the frame. Skin tones also appear natural and saturated. It’s a high-contrast, balanced look.

Like the H8F, the R8F has a fantastic Game Mode that reduces input lag (the amount of time between when the TV receives a signal and the display updates) dramatically. Testing with an HDFury 4K Diva HDMI matrix, we measured an unacceptably high 93.3ms input lag with Game Mode turned off. Turning the mode on, which can slightly hurt image quality and disables certain processing features, makes that number drop to an excellent 6.2ms. That’s well under our 20ms threshold for considering the R8F one of the best TVs for gaming.

The Hisense R8F series takes the same excellent picture quality we saw in the H8F line and swaps out Android TV for Roku TV. It also shows the same significant levels of light bloom as the H8F, but aside from that, the R8F stands as a fantastic value. If you want relative simplicity and a bunch of streaming apps, the R8F is a strong pick. If you want a slightly more complicated but feature-rich smart TV platform, the H8F is the better choice.

In both cases, however, you can get an even better picture by spending a bit more. On the Roku TV side, the TCL 6-series remains our Editors’ Choice for its similarly excellent color performance and even brighter picture, while for Android TV Hisense’s slightly pricier H9F line improves upon the H8F’s panel with a much brighter backlight that suffers from far less light bloom.