Here’s the Pixel 5 and everything else Google just announced 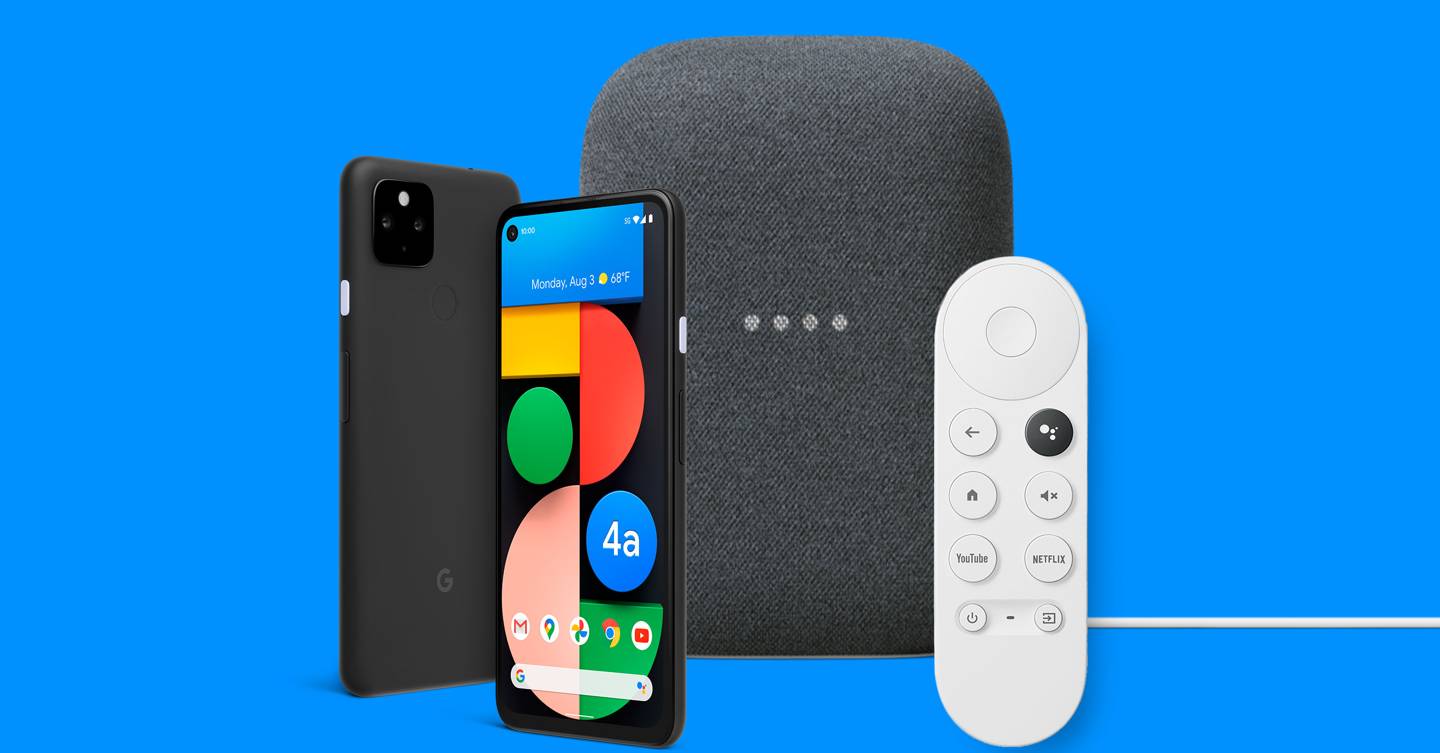 Google wins the award for leakiest launch of 2020 with the new Chromecast with Google TV actually on some shelves before the #LaunchNightIn announcement. An inspired guerilla marketing move or lackadaisical Walmart employee? We’ve known all summer to expect the Google Pixel 5 and Pixel 4a 5G this autumn, though. And a rebranded Nest Audio smart speaker completes the line-up that’s certainly more curated than the wall-to-wall-to-ceiling products we just saw from Amazon.

The biggest news of the night is the Pixel 5 with 5G. Google knows that its two major selling points for its smartphone line are still the camera system and its software suite. (OK, the design has its fans too). So there’s a new 16MP ultrawide lens alongside the dual 12.2MP main camera together with plenty of new tricks including Night Sight for Portrait mode, exposure bracketing and HDR+ and three new stabilisation modes for video: locked, active and a 2x slow-mo ‘cinematic pan’ that looks rather useful.

On the software side, Google talked up its games streaming service, Stadia, a couple of enhancements to its nifty Recorder app and new HD screen sharing abilities on Duo video calls. Our favourite, though, is Hold for Me, an offshoot of Google’s futuristic Duplex tech – the upgrade means Google Assistant can now wait on hold for you. We’ll believe it when we’ve tested it. So there’s nothing as out there as the gesture sensing we saw on last year’s Pixel 4, it’s more a series of just-enough iterations that should keep the Pixel in the mix if the performance holds up across the board.

As for the essential specs, the Pixel 5 arrives with a 6-inch 1080 x 2340 OLED display, coated in Gorilla Glass 6, with a Snapdragon 765G and 8GB of RAM under the hood. There’s 18W fast charging, reverse wireless charging and a 4,080mAh battery, which sounds a little stingy for a big 5G phone and may explain Google’s shout out to its Extreme Battery Saver mode, alongside the existing Adaptive Battery feature. Unlike the 4a phones, it gets an IP68 dust and water resistance rating too.

Both Hold for Me and Extreme Battery Saver will be pushed out to older Pixel phones and the Pixel 5 is good for three years of Android and security updates with freebies like three months of Stadia Pro, YouTube Premium and 100GB of Google One storage thrown in for good measure.

The Pixel 5 is available for pre-order for a very reasonable £599 from today. It goes on sale on 15 October and it’s available in black and ‘sage’ in the UK.

A major revamp of Google’s streaming device sees the hardware now come boxed with a Google Assistant remote while an overhaul of the user interface basically turns it into the company’s version of Apple TV.

Google says the remote was its most requested feature, and here it can control your TV or soundbar, while a dedicated Google Assistant button activates the voice UI. There are also dedicated buttons for quick access to YouTube and Netflix.

As before, the new £59 Chromecast plugs into your TV’s HDMI port. It pulls together films and TV from streaming services including YouTube, Netflix, Disney+, ITV, My 5 and Prime Video, and can stream programmes in up to 4K HDR 60fps, and supports both Dolby Vision and HDMI pass-through of Dolby audio content.

The shiny new UI offers up recommendations based on what you’ve watched previously. And, yes, multiple profiles are supported and different voices can be individually recognised. Much like offerings from elsewhere, including Sky Q, you can ask questions such as “What should I watch?” as well as search by mood, genre, actor etc. You can also hook in your other compatible home tech, commanding Google Assistant to dim lights or show the feed from the front door camera.

Pre-orders start from today and Chromecast with Google TV, available in white, pink and blue, will be on-sale from 15 October. Why Google is charging UK punters £59 when US users will be paying £39 is something of a puzzle, however.

Next, the Pixel 4a 5G is a fairly straightforward update, which Google told us earlier this year was delayed due to the coronavirus. With a 6.2-inch 1080 x 2340 display – as on the standard £349 Pixel 4a – there’s also the same 12.2MP dual main camera and an 8MP ultrawide lens here.

The plastic, but fairly chic, Pixel 4a 5G runs on the Snapdragon 765G with 6GB of RAM and 128GB of storage available. It’s 8.6mm thick and looks almost identical to the 4G model. Headphone jack? Check. Android 11? Check. Fingerprint sensor on the back? Check, everything is present and correct. It goes on sale on 19 October in the UK for £499 with pre-orders open now.

Google is claiming Nest Audio is 75 per cent louder and has 50 per cent more bass than that original Google Home. With a 19mm tweeter for high frequencies and a 75mm mid-woofer providing that extra power. Nest Audio will also adapt to content it’s playing thanks to a “Media EQ” feature that can discern between music, podcasts, audiobooks etc. As for security, you can turn off the microphone on Nest Audio via a hardware switch on the side of the device.

With Nest Audio, Google clearly is taking aim at the affordable mutli-room speaker systems such as the Sonos x IKEA collaboration. You get the usual integration to music services and inclusion of Google Assistant in each unit. You can stereo pair, too.

One thing was that Google hardware design head Ivy Ross made quite a thing in our pre-brief of the pastel colours the new Nest Audio was available in, saying the choice of colour was a major part of the redesign, but the UK, for now at least only gets white or black options. US users get the full range of hues.

You can pre-order Nest Audio speakers now (on sale 15 October), and although the cost is £90, you get £20 off for every two that you buy.

🌐 TikTok was conquering the world. But Trump’s battle heralds the ugly birth of a new splinternet

🎮 We now know everything about the next-gen consoles. So which should is better – the PS5 or Xbox Series X?

🎬 Why Netflix keeps cancelling your favourite shows after two seasons