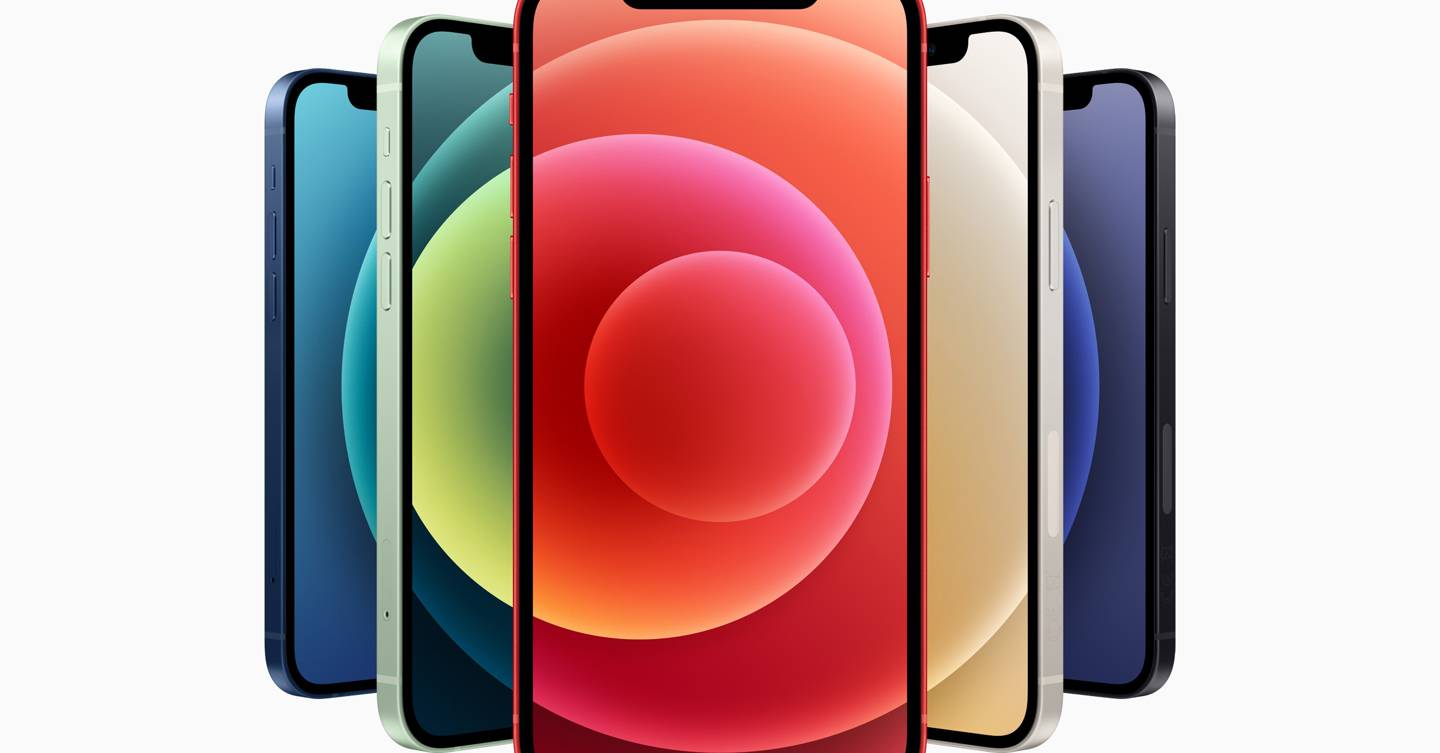 The iPhone 12 range is a month late by Apple’s standard September announcement schedule, but has finally arrived. And it’s a bumper crop.

The iPhone 12, iPhone 12 Mini, iPhone 12 Pro and iPhone 12 Pro Max cater to just about every kind of iPhone buyer. And their ultra-wide price range should worry a few Android manufacturers too. Apple also announced the HomePod mini, an alternative to the Amazon Echo 4th Generation, and a new iteration of its MagSafe technology.

5G is the most obvious change across the 2020 iPhone range. All four new models, from Mini to Max, have it. Sticking with 4G may have proved damaging now that Samsung, not known as a cut-price phone-maker, sells a £349 5G phone: the Samsung Galaxy A42 5G.

Tim Cook namechecked Verizon’s 5G UWB network in the US and hyped the benefits including more responsive gaming, high network speeds in densely populated areas and even the security angle of 5G: less risk from connecting to random Wi-Fi hotspots.

All four iPhone 12s have another consistent trait: sharper corners. The rounded sides of the iPhone 11 Pro have been switched for flatter ones reminiscent of the style Apple used from the iPhone 4 days up to the iPhone 5S, not to mention recent 2020 iPads.

Each iPhone 12 also has the Apple A14 Bionic processor, which makes the iPhone 12 Mini, in particular, the most powerful phone available at its price. A new 6-core CPU is, Apple reckons, 50 per cent faster than any other smartphone processor, with a similar claim for the 4-core GPU and the not unrelated news that League of Legends: Wild Rift is coming to iOS. The Neural Engine also has a boost from eight to 16 cores; that’s 11 trillion operations per second if you’re counting.

Elsewhere, Apple has built Ceramic Shield technology that’s composed of nano-ceramic crystals in a glass matrix. Apple says this is “tougher than any smartphone glass”, a claim it has made before, and more specifically says it delivers four times better “drop performance”. In other words, the iPhone 12 should have four times the chance of surviving a drop than an iPhone 11. We’ll believe it when we drop it.

The iPhone 12 Mini is a small aluminium phone, a little like an iPhone SE (2020) with a 5.4-inch display stretched to fill its front. It’s lighter than the iPhone 8, too.

It has two cameras, a primary 12MP with an F/1.6 lens and a 12MP ultra-wide. Lens aperture has been improved; iPhone 11-series phones have slightly narrower f/1.8 aperture. Apple’s iPhone 12 Mini costs only £100 less than the iPhone 12, leaving the iPhone SE (2020) room to swim happily in the shallows of the Apple Store.

The standard iPhone 12 has much of the same hardware, but with a larger 6.1-inch Super Retina XDR Display screen that matches the iPhone 11’s inch count in a thinner, lighter and smaller design. There’s a dual-camera setup with the main wide camera with a seven element lens – thus, camera bump – and that F/1.6 aperture. As is the case across the range, Night Mode is now available on the ultra-wide lens, too.

The iPhone 12 and the iPhone 12 Mini will be available in black, white, red, blue and green – both have that fairly wide notch at the top of the display.

Most of the more exciting hardware developments are left for the iPhone 12 Pro models. But the sharper design should give the standard iPhone 12 a fresh feel for those who just want an upgrade to the already excellent iPhone 11.

The design and the cameras are front and centre on the high-end models. The iPhone 12 Pro and iPhone 12 Pro Max have a stainless steel band design, come in four colours (silver, graphite, gold and pacific blue) with IP68 waterproof rating (six metres for 30 minutes).

Again, a fairly wide notch here – no hole-punches or under-display cameras – and that means FaceID is present and correct. Sadly there’s no word on bringing back TouchID.

The iPhone Pros gain the LiDAR sensor Apple added to the iPad Pro in early 2020. This is a depth sensor used primarily to map out the world in front of the iPhone or iPad camera for augmented reality apps. On top of this object and room scanning, it is also used to get to faster auto-focus in low-light scenes and aid the creation of portrait photos with blurred backgrounds at night.

On top of the ultra-wide lens (with a 120 degree field of view), both iPhone Pros have dedicated 12MP zoom cameras with a 65mm focal length. The iPhone 12 Pro has a 4x optical zoom, the iPhone 12 Pro Max a 5x zoom. However, neither relies on the periscope arrangement seen in phones like the Huawei P40 Pro and Samsung Galaxy Note 20 Ultra. The main wide sensor has larger pixels and faster aperture and a new DSLR-style OIS system which stabilises the sensor, rather than the lens.

Apple promises zoom improvements across the iPhone 12 range, though, thanks to changes to the way digital zoom operates. Multiple images are merged to improve the final photos, comparable to the Super Res Zoom feature Google introduced on the Pixel 3. That uses a phone’s OIS motor to fractionally alter the camera’s view as it shoots, allowing it to emulate the images of a higher resolution sensor.

Throw in 10-bit HDR video recording with Live Preview, AKA the admittedly impressive ability to shoot, edit and watch video in Dolby Vision, as well as Apple Pro RAW images and things look very ’pro’ on the imaging front indeed.

The iPhone 12 Max starts at £1,099 and will be available for pre-order on November 6. The Pro Max will be released on November 13.

MagSafe is making a comeback, this time for the iPhone. It’s essentially just a circular magnet that sits in the back of the iPhone 12.

Wireless chargers will now attach directly to the back of your phone without you having to faff around trying to place it correctly. It can also attach to accessories, like a magnetic wallet case.

Interestingly, it can also charge both your Apple Watch and your iPhone at the same time. You can get up to 15W fast charging. And if you hoped AirPower might be revived, MagSafe pretty much shoots that dream dead.

The iPhone 12 range has attracted speculation since before the iPhone 11 was announced, but the HomePod mini is a fresher surprise. This is a smaller take on the 2018 HomePod, one that cuts the price from £279 to £99.

The rounded column shape of the original HomePod has been swapped for a ball just under 8.5cm tall with flattened top and bottom. Late 2020 is the season of the sphere, as Amazon has already switched to a similar design for its Amazon Echo 4th Generation. However, the HomePod mini also has a display up top, keeping some of the older HomePod’s design DNA.

It can play music and lets you talk to Siri via a three-microphone array, but will also act as a UWB node. Apple added UWB to the iPhone 11 last year. It’s a wireless communications standard that allows Apple HomeKit to track the location of devices with U1 chipsets far more accurately.

This is not an Apple-specific technology either. The CTO of Samsung’s mobile division posted an article entitled “Samsung Expects UWB To Be One of the Next Big Wireless Technologies” the day before the iPhone 12 launch, selling it as of equal importance to Bluetooth and Wi-Fi.

To achieve a big sound from a small design, the Apple S5 chip inside the HomePod mini applies tuning models to supposedly optimise loudness, adjust dynamic range and control the movement of the driver and passive radiators in real time.

Apple’s new Intercom feature apes other assistant speakers with a broadcast mode, but because of Apple’s ecosystem this version works with iPhone, iPad, Apple Watch, AirPods and CarPlay, so you can send Intercom notifications and messages while out or in the car, too.

The HomePod mini will be available in white and space grey at £99. Preorders open on November 6 and it goes on sale on November 16.

There’s another new release – not included in the main show – for those less keen on spending more than £100 too, the £49 Beats Flex. They are a lower-cost sequel of sorts to the BeatsX Wireless, which originally cost £129 but can now be found online for £59.

The Beats Flex are neckband earphones with 12-hour battery life, and have magnetised earpieces that pause playback when linked together around your neck. They use the Apple W1 wireless chip for easy pairing with iPhones and iPads, like the BeatsX Wireless.

You can order them today, in black and yellow, for delivery on or slightly after October 21. Grey and blue versions will be available early next year.