Here is Everything You Need to Know About Quantum Tunneling 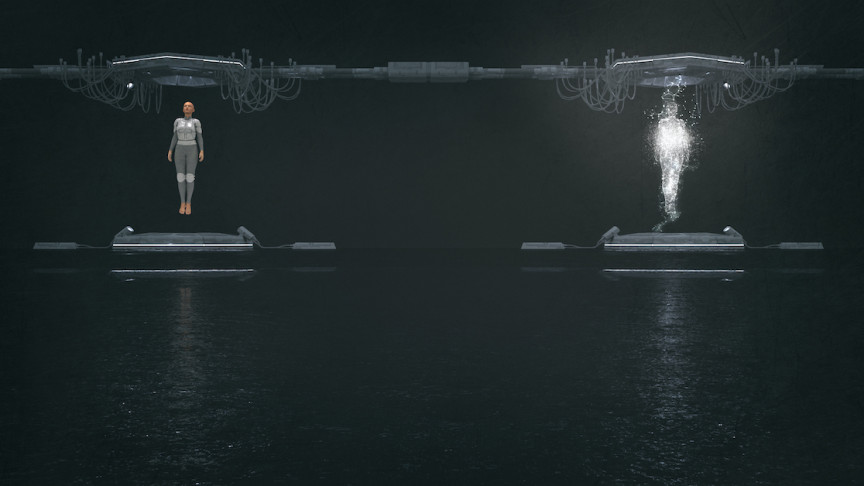 For the uninitiated, quantum physics is a branch of science that describes the particles that make up matter and the forces with which they interact. If we have learned anything about the quantum world, it is this; the quantum world is weird. On an unimaginably small scale, things do not behave intuitively. Physicists may have a good grasp of some of the mathematics behind quantum physics, but this math can sometimes point to things that leave them scratching their heads.

Niels Bohr famously once said that “those who are not shocked when they first come across quantum theory cannot possibly have understood it.”

In the quantum world, it may be possible for entangled particles to communicate faster than light, tiny particles to exist in multiple places at once, particles pop in and out of existence randomly, and some particles can “teleport through walls” like ghosts. Yes, the quantum world is strange. As you may have guessed, we will focus here on the final example, a process called quantum tunneling.

At its most basic and understandable explanation, quantum tunneling is the mechanical phenomenon where a wave function can propagate through a potential barrier.

Imagine that you throw a ball at the wall. It will hit the wall and bounce backward. If you let it roll down a hill, when it reaches the bottom, it will stay there. But at the quantum scale, particles will occasionally hop through the wall, instead of “bouncing back”. Though it may seem like a plot-device out of Marvel’s Avengers, this phenomenon was noticed as far back as 1928, when two physicists wrote in Nature that particles sometimes seem to be “slipping through the mountain and escaping from the valley.”

Your barrier is no-good here

Imagine that you and your little sister are battling it out using Nerf Guns. In this, you are shooting at each other from separate sides of the room. Your sister is hunkered down between a small make-shift pillow “wall” a few feet high and a few feet wide as you consistently fire your Rival Nemesis MXVII at her. Since this is the quantum world, you have millions of rounds loaded in your gun. In our case, 99.999% of your Nerf rounds will bounce off the wall. However, a very tiny percentage will “teleport” to the other side of the wall, landing the finishing shots on your sister.

How did your Nerf pellets magically appear on the other side of the make-shift wall? You have quantum tunneling to thank for that. This is where our story begins.

Particles have the chance of slipping through the mountain and escaping the valley.

Since the first publication of the paper on the idea of quantum tunneling in 1928, researchers have been eager to learn more about this phenomena, understand how it works, and get a direct answer to the age-old question of how fast is the “tunneling” taking place.

Tunneling itself is a good reminder of how weird particles can behave on the quantum level. In quantum tunneling, a subatomic particle can appear on the opposite side of a barrier that it should not be able to penetrate.

Say you were to release a subatomic particle, like an electron or proton, into a space on one side of a potential energy hill. The particle does not have the energy to make it over the hill, so you are confident that the particle will stay in place. Nonetheless, the particle has suddenly disappeared. Like in the figure above, once you walk to the other side of the hill, you notice the particle somehow made it over our hill. Particles that tunnel can sneak through barriers just like this, and it may be more common than you think.

In fact, quantum tunneling may be essential to processes as fundamental as photosynthesis. Once they discovered quantum tunneling, physicists realized that it actually solved many mysteries. It explained various chemical bonds and radioactive decays and how hydrogen nuclei in the sun are able to overcome their mutual repulsion and fuse, producing sunlight.

Semiconductors, transistors, and diodes wouldn’t work without it. And, of course, quantum computing involves tunneling, too. It turns out that particles slip through the mountain and escape from the valley fairly often.

One of the most significant differences between classical physics and quantum physics is that quantum physics is probabilistic. Let’s go back to our particle and hill barrier example. If we were trying to push a ball over the hill, we would know exactly where the ball is at all times. However, since we are using a particle, we do not. Unlike a ball, we cannot exactly know where a particle is at a given time.

You can thank the Heisenberg Uncertainty Principle for elucidating this. It states that we can never know both the exact position and moment of a subatomic particle. Interestingly, it has nothing to do with a lack of proper measuring tools. The Heisenberg Uncertainty Principle appears to be a fundamental part of the nature of reality. However, there is some good news.

We are able to measure the probability of where a particle is at a given time, to a very high degree. Quantum physicists model these probabilities using a wave function. In short, a wavefunction is a description of the probability of finding an object in a given place and time.

Still with us? One odd property of waves is that they rarely stop when they hit something. Think about sound. Sound waves from your music do not stop when they come in contact with solid objects. That is why even with your door locked. Your roommates can still hear you blasting Kpop.

Or, if this simply wasn’t the case, the sunlight hitting your home would just stop and never warm your home. The same thing happens with the waveforms used to describe quantum particles. An object’s wave function can extend into or even past a barrier. Since that function describes the probability of a particle in a given space, occasionally, that particle ends up on the other side of the barrier too. Makes sense?

Could you walk through walls?

Perhaps theoretically, but most likely no. Though this could be a cool (and dangerous) power to have, the probability of this happening is pretty close to zero. Jack Fraser, a physics graduate from the University of Oxford stated that, “You could get a trillion people walking into walls, a trillion times every second since the beginning of the universe [13.8 billion years ago] – and the likelihood of one of them walking through the wall is still so small, it’s [practically] zero.” Why? The probability of an object tunneling is directly correlated to the object’s mass. The average person weighs about 70kg; an electron weighs about 9×10–31 kg.

But, if you feel you are missing out on the quantum party, not all hope is lost. Some research has suggested that quantum tunneling could be happening inside our bodies, as the enzymes responsible for activating carbon-hydrogen bonds could promote hydrogen tunneling. Interestingly, one of these enzymes is responsible for converting ethanol into acetaldehyde, the compound that causes headaches, dizziness, and nausea after a night out drinking. So, maybe you are not missing out on the quantum party after all.

How fast does quantum tunneling occur?

This is the next logical question. However, for the past few decades, this has been a hotly debated topic, along with what happens to the particle when it “moves” through the barrier. Like many things in the quantum world, the answers to these questions are not straightforward.

Researchers have previously tried to measure the time it takes for tunneling to occur with varying and often questionable results, with some arguing that the event is possibly even faster than the speed of light. However, just this past year scientists may have cracked the case with a historic, 20-year long research experiment.

In the published paper led by physicists from the Quantum Information Science Program at the Canadian Institute for Advanced Research, researchers describe not only how they measured the process but the number that they got. “Quantum tunneling is one of the most puzzling of quantum phenomena. And it is fantastic that we’re now able actually to study it in this way,” says study co-author Aephraim Steinberg, co-director of the Quantum Information Science Program.

How did they do it? They utilized some of the most basic principles in quantum physics to make it happen. In their experiment, they used 8,000 rubidium atoms cooled to a billionth of a degree above zero Kelvin.

The atoms needed to be at this temperature or they would have moved around randomly at high speeds rather than staying in a small clump. The Canadian physicists used a laser to create a barrier, focusing it so that the barrier was 1.3 micrometers thick, or the thickness of about 2,500 rubidium atoms. With another laser, the team pushed the rubidium atoms toward the barrier, moving them at a steady pace of about 0.15 inches (3.8 mm) per second. Most of the rubidium atoms bounced off the barrier. However, thanks to our old pal tunneling, 3% of the atoms penetrated the barrier and made it to the other side.

The choice of rubidium was not random. It was used because the spin of the atom can be altered by lasers. The longer it took for the rubidium to tunnel through the barrier, the more the spin would change. By measuring an atom’s spin axis before and after they entered the barrier, scientists could tell how long the atoms took to tunnel. So, how long did the process take? An average of 0.61 milliseconds.

The result proved to be a bit baffling, as this is relatively slow in the quantum world, especially when considering that previous work indicated tunneling could occur instantaneously. Regardless, it is another impressive example of how an approach that could help demystify the quantum realm. The biggest takeaway is that it was possible to measure this event. “We’re working on a new measurement where we make the barrier thicker and then determine the amount of precession at different depths. It will be very interesting to see if the atoms’ speed is constant or not”, says the team.

Though not as mysterious as some of the more out-there cases, quantum tunneling is an important part of the nature of our world and universe. Understanding quantum tunneling could help us further the development of emerging technology like quantum computers. It will be interesting what new quantum phenomena we will be able to test.