Guy Gets Zoom Running on an Vintage Late 80s Tech 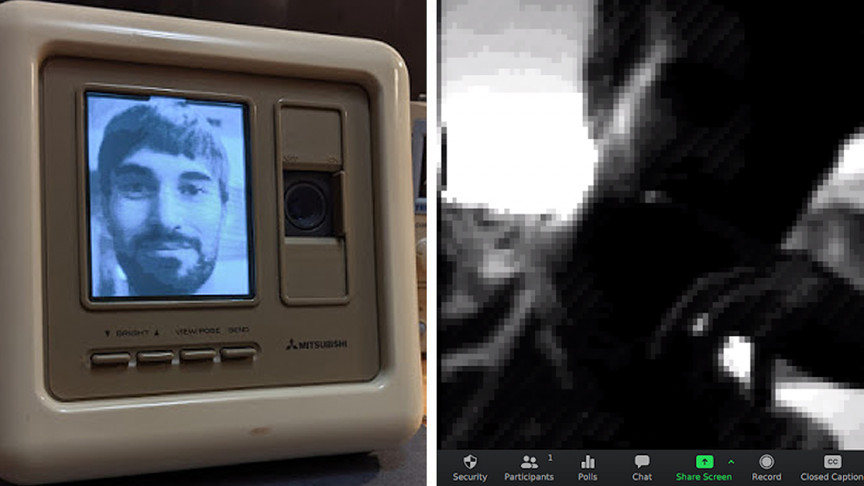 COVID-19 has brought face masks, hand sanitizers, and Zoom meetings into our lives, and shockingly, a shortage of webcams has followed. Never one to be discouraged, a blogger named Alexander Gee explained how he modified a piece of vintage technology, Mitsubishi’s video conference equipment called the VisiTel, to play along nicely with modern technology.

For the whopping price of $399, VisiTel was certainly a product ahead of its time and a feat of engineering. After figuring out the device used a simple AM modulation scheme, he decided to make “this glorious time capsule of late 80s tech work with 2020’s work-from-home platform of choice, Zoom,” to chat with his colleagues — but he wanted to do all that without changing the hardware.

That was not a completely easy task, as he explained in detail on his blog. He started by trying to decipher the messaging protocol of the device by showing pictures with known properties and measured the output waveforms coming from VisiTel.

He also had to change the RJ9 connection to a 3.5 mm headphone jack. With the 3.5 mm jack in place, the connection was much simpler.

Originally, the VisiTel communicated in a series of pictures instead of a video signal, which was one of the biggest hindrances that stood in Alexander’s way when he was encoding and decoding the stream.

After understanding the protocol, which eluded him for weeks, Alexander was able to present the device as a webcam. With the simple addition of a new code, Zoom could now receive images from the VisiTel, and as Alexander put, “we can video chat like it’s 1988.”

If you’re into signal processing, reading him gush over the process of making this project possible in extreme detail will definitely grab your attention. In the meantime, you can learn how to turn a boring Casio into the stealthiest cheating device ever.

On another note, for vintage TV lovers, this video where the hosts of Gadget Guru on WSMV examine the VisiTel back in 1988 is a goldmine.