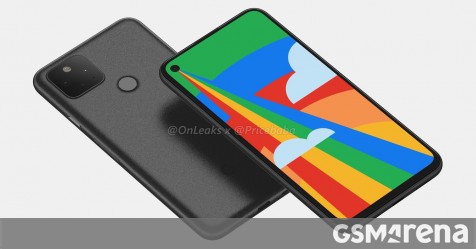 CAD-based renders of the Google Pixel 5 have been released by @onleaks and the phone depicted in them looks very much like the Pixel 4a, save for a few additions and an omission.

The screen measures between 5.7” and 5.8”, so it’s the same size as the one on the 4a. It’s flat too, with a single punch hole camera in the upper left. Notably, the Soli radar from the Pixel 4 seems to be is missing.

Anyway, this contradicts the rumors claiming that Google will only release an XL version of the Pixel 5.

The back is home to the squircle camera island, which now houses an extra lens. Next to that is the fingerprint reader – that’s right, this year Google is going the budget route. This includes using a Snapdragon 765G chipset instead of an 800-series chip.

The phone measures 144.7 x 70.4 x 8.1 mm, going up to 8.5 mm at the camera bump. These are almost exactly the same dimensions as the 4a. We mentioned an omission and what’s missing from the Pixel 4a design is the 3.5 mm headphone jack. The texture of the back is based on the official teaser published by Google, same with the glossy power button.

Both Pixel 5 and the 5G version of the Pixel 4a will come with 128 GB of storage,says Roland Quandt (that makes sense, even the 4a 4G has that much built-in memory). The two new models are expected to be announced on September 30 with pre-orders starting October 8.