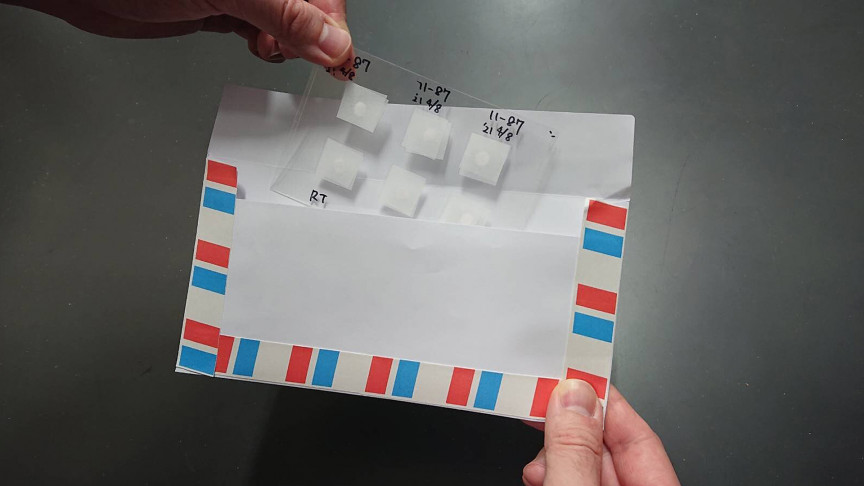 Here’s something you probably haven’t thought of before: In addition to your Amazon shopping spree packages, delivery firms are also transporting bottles of mouse sperm both domestically and internationally.

Scientific research relies heavily on mouse models, so scientists throughout the world are shipping mouse sperm in glass vials packed on dry ice — which is a much better alternative to shipping actual mice. However, because glass is heavy and prone to breaking, shipping is both costly and risky, as delays in transportation might result in frozen and unusable samples.

A team of researchers led by Daiyu Ito at the University of Yamanashi in Japan has now come up with an ingenious way to deliver sperm that removes such risks, according to Phys.org.

The method, which entails putting freeze-dried mouse sperm on a postcard and mailing it, allows sperm to be sent easily, without the risk of glass vials breaking, and for cheap, according to a paper published in the journal Science.

The team looked at many preservation methods including plastic sheets, which, although didn’t break, were toxic for the sperm. Researchers concluded that weighing paper was the easiest to use and had the greatest offspring rate of all the methods tested.

Now, there is a thing called the “sperm book” on earth, thanks to scientists. Thousands of different mice strains’ sperm were able to be kept in this book using the novel method of preservation. The scientists stored the book in a freezer at -30°C until further use.

Furthermore, even after traveling tens of miles, the sperm retained its potency. The scientists were able to mail the mouse sperm from the “sperm book” as postcards by attaching a plastic sheet to the blank postcard. The postcard traveled from Kyoto to Yamanashi, which are roughly 250 miles (400 kilometers) apart by car, and once they reached their destination, the sperms were rehydrated and were able to fertilize eggs and produce healthy baby mice. The babies also demonstrated normal fertility.

“The postcard strategy was easier and cheaper compared to any other method,” said first author Daiyu Ito of the University of Yamanashi. “We think the sperm never expected that the day would come when they would be in the mailbox.”

Ito probably has a point. In a delightful turn of events, one of the scientists even sent another a “Happy New Year” card containing mouse sperm.

The team wants to perfect the mailing method next, and they think it “will have a strong impact in their field worldwide.” Then, their next goal will be to be able to store them at room temperature for at least one month. They also want to create a technology that will allow freeze-dried sperm to come back to life and self-fertilize in the future.