Flashback: HTC One X bet on music star power and a custom imaging chip, but lost The first HTC One phone was not the HTC One – but we won’t get into another rant about the name “one”. We want to focus on one of the best phones that the company ever built and one of the best Androids of its day.

The HTC One X was introduced in 2012 and was the start of a new product line. The X would be the flagship, S the mid-ranger and V an entry-level offering. The One S had a metal exterior, reminiscent of the HTC Legend, which is a couple of generations down the family tree.

The One X used a polycarbonate shell instead with a pebble-like design rooted in smooth curves front and back. Nokia was also doing polycarbonate phones at the time, though the Lumias maintained a few sharp corners.

While the material fell out of fashion, polycarbonate was superior to the typical plastics used at the time – reviewers and buyers alike commented how much more premium the HTC felt compared to its rival, the Samsung Galaxy S III (which had a smooth plastic exterior, but a similar pebble-like design).

Polycarbonate was often left with a matte surface that was soft and warm to the touch, compared to the cold hard metal and glass that became common later on. Better yet, instead of painting the surface, paint was added while the polycarbonate formula was being mixed. This meant that it was the same color throughout, which (combined with the matte finish) made scratches barely visible. And it wouldn’t crack like glass, even if you dropped it.

The One X wasn’t too big, despite its 4.7″ display, which appealed to people as most hadn’t yet accepted that phones will be enormous. However, not everyone was happy about the lack of a microSD card slot or the sealed battery.

On the front was a beautiful Super LCD 2 with 720p resolution. It had a full RGB stripe, making for a sharper image compared to the early 720p OLEDs like the ones in the Galaxy S III and HTC One S. 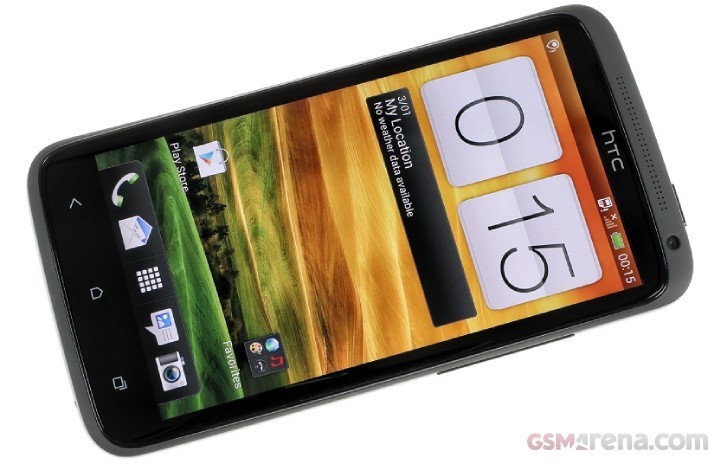 This display rendered Sense UI, which has always been known for its graphical fidelity. This was back in the Android 4.0 Ice Cream Sandwich days when custom skeuomorphic skins were still in vogue. The phone would be updated to 4.1 Jelly Bean but no further.

Most units ran on a Nvidia Tegra 3 chipset, which featured four Cortex-A9 cores as well as a fifth low power core. This companion core handled background tasks like music playback and general OS standby needs while using less power than the main cores. The GPU was three times faster than the Tegra 2 GPU, making the chip quite the powerhouse.

Some models came with a Qualcomm Snapdragon S4 instead, like the confusingly named One XL (which was the same size as the One X), AT&T’s version of the phone, the model for China and a few others. Benchmarks at the time showed that the Snapdragon was a little faster than the Tegra (the One S used the Snapdragon S4 in all regions).

These weren’t the only regional variations. Some countries got pricey Beats by Dre headphones bundled in the retail package, some got simple HTC headphones others got no headphones at all. All had the Beats Audio equalizer and Beats Audio logo on the back, though.

It has lost its shine now, but back then the brand had star power. And HTC wanted to leverage that to set itself up as the premium, music-loving brand among other Android makers (and Windows Phone, but that’s a story for another time).

In August of 2010 HTC acquired a controlling 50.1% share in Beats for $309 million. Then in July 2012 HTC sold half of its stake for $150 million, selling the other half for $265 million in September of 2013. Less than a year after that, Apple was reported to be in negotiations to purchase Bets for $3.2 billion, significantly more than it was valued for when it was under HTC’s stewardship.

To be fair, HTC mostly left Beats to its own devices, and used it for branding opportunities for its phones. Samsung handled a similar situation better, acquiring Harman (which owns AKG, among other brands) and now premium Galaxys come with AKG headphones in the box. Then again, Apple used the Beats Music streaming service to help launch its own Apple Music while Samsung’s Milk Music died a quiet death.

Moving on, the HTC One X had an “ImageSense” camera with an 8MP sensor and a secret weapon – the ImageChip. This was a dedicated image processor outside of the ISP that comes with the chipset.

This pre-dates Google’s Pixel Visual Core by five years, but it wasn’t nearly as successful, the One X camera just wasn’t the best 8 MP shooter of its day. Not that the HTC was unique, the Nokia 808 PureView also had an external image processing chip – both phones were announced at MWC 2012 and won awards at the trade show. However, only one of these two is remembered for its camera.

Those were early days for 1080p video on mobile too, the X topped out at 24 fps, which wasn’t quite smooth enough (in part due to the low 10 Mbps birate). The sound, recorded in stereo, was pretty good though.

The One series was supposed to be a change in strategy for HTC, which was already starting to struggle. It would focus on fewer devices, trading quantity for quality (hence the simple One X, S, V structure). We’ve heard similar talk from Sony before with similar success.

In the end the HTC One X has been all but buried by the sands of time, remembered only by those who used it or wanted it but couldn’t afford it. Still, they probably remember it fondly.