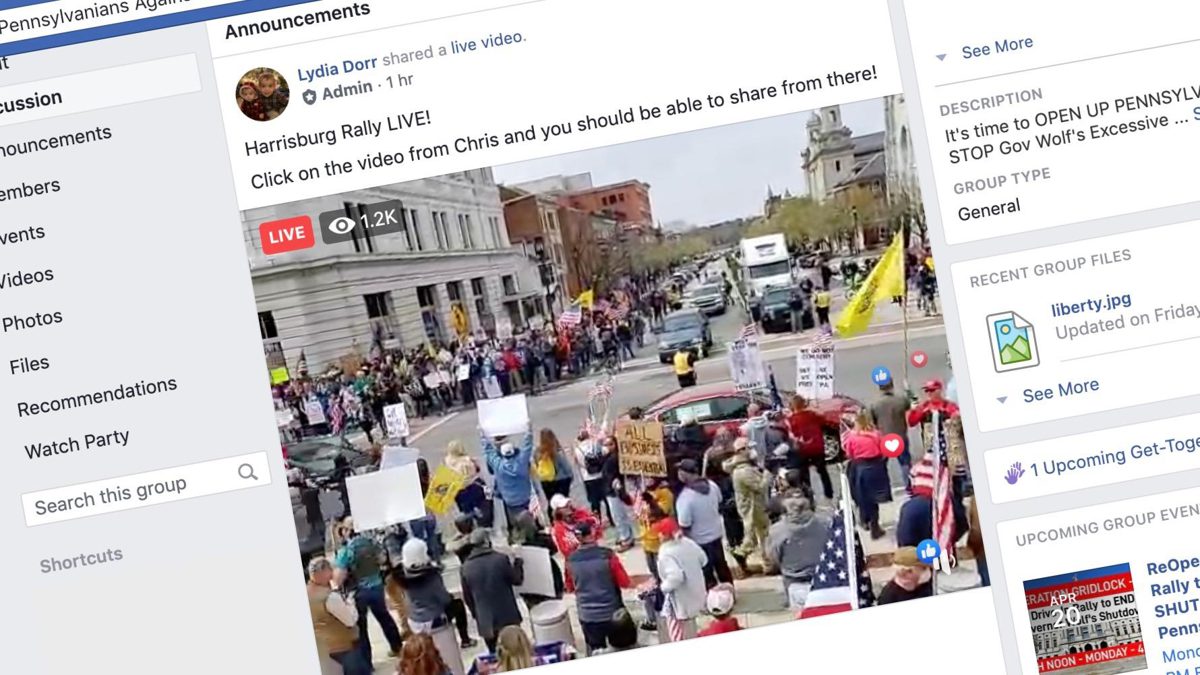 Facebook is starting to remove event postings that call on Americans to protest the shelter-in-place orders.

The company is doing so to comply with orders from certain state governments. So far, Facebook has removed anti-quarantine events directed toward users in California, New Jersey, and Nebraska, according to CNN. In addition, the social network is asking state governments in New York, Wisconsin, Ohio, and Pennsylvania whether the anti-quarantine protests violate their social-distancing measures.

The crackdown comes as the social network has become home to numerous anti-quarantine groups, which have been organizing on Facebook to stage protests events across the US. One such event held today, called “Operation Gridlock Pennsylvania,” attracted hundreds of people, who are now protesting outside the state capitol building, in defiance of the local stay-at-home order.

According to The Washington Post, a trio of “far-right, pro-gun provocateurs” known as the Dorr brothers are behind the anti-quarantine campaigns. Their “Pennsylvanians Against Excessive Quarantine” group now has over 67,000 members. Meanwhile, another group from the brothers has over 100,000 members in Wisconsin, and is calling on members to protest in the state capital later this Friday.

Facebook didn’t immediately respond to a request for comment. But the company has long struggled to find any middle ground in moderating political debates. Last Friday, President Trump himself tweeted the phrases “LIBERATE MINNESOTA!” “LIBERATE MICHIGAN,” adding more fuel to the anti-quarantine protests, despite the White House’s own guidance for social distancing, which urge people to “Listen to and follow the directions of your STATE AND LOCAL AUTHORITIES.”

A recent poll found that 58 percent of Americans are worried the US is moving too quickly to lift the stay-at-home orders. However, 32 percent are concerned the country is moving too slowly, and fear this will harm the economy.

Now Facebook is facing some blowback from conservatives over removing the anti-quarantine protest listings. Among the critics is Republican US Senator Josh Hawley, who questioned whether the platform was violating people’s free speech.

In the meantime, Facebook has been trying to keep the platform free of pandemic-related misinformation. “We’ve taken down hundreds of thousands of pieces of misinformation related to COVID-19, including theories like drinking bleach cures the virus or that physical distancing is ineffective at preventing the disease from spreading,” Facebook CEO Mark Zuckerberg said last week.