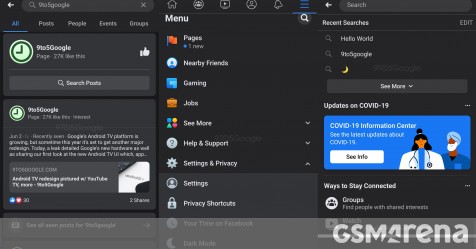 Facebook-related apps have been getting Dark modes for a while now, with Messenger having it since March 2019, Instagram joining last Fall, and Whatsapp making it official a couple of months ago. Still, the closest you can get to a Dark mode on actual Facebook for the time being remains Facebook Lite. That’s finally about to change, at least on Android, as these screenshots below indicate.

A mostly final version (though one not yet released to the public) shows the main Facebook app interface, reimagined for your OLED viewing pleasure (and some battery savings). You’ll be able to either force it on or have it respect the phone’s global Dark mode settings. It’s mostly a dark mode featuring several hues of dark gray with some light gray for icons here and there, but little actual black – we’ve seen research that proves that having the OLED pixels dark gray does enough for you battery so that turning them completely off isn’t needed.

A complete redesign of the ‘Time on Facebook’ feature is also in the works, potentially prompting you to use it more and realize how wasteful you are with your precious time. A coronavirus tracker could make it to the next Facebook app update too.

It’s unclear when the new features will make it to the public. Dark mode, in particular, all but guarantees you’ll hear about it.