F-16 Fighter Jets Get a Full Wash by Robots Now 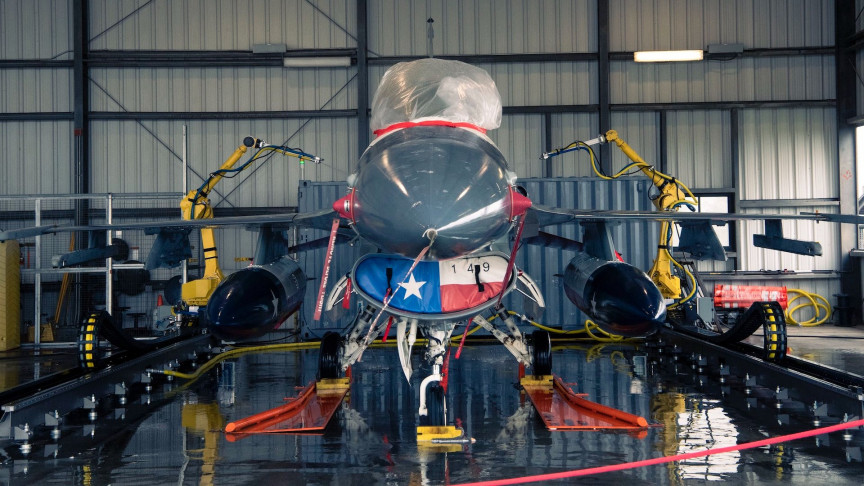 You don’t think twice before popping your car into the carwash’s soapy and fluffy rollers and splashing hoses. So you might not think twice about robots being used to wash a fighter jet, but you’d be oh-so-wrong.

Fighter jets are sensitive creatures that require a lot of time and effort to be properly washed, but more on that in just a moment. With the main aim of reducing the huge amount of labor and energy spent on cleaning fighter jets, the U.S. Air Force is working towards using robots to do the job.

In fact, the Air Force’s 149th Fighter Wing airmen in Texas trialed and demonstrated a robotic system built specifically to wash its F-16 fighter jets that it shared on Twitter on May 3.

The system is still in its proof-of-concept stages, as The Drive pointed out, but should it prove efficient and useful during its trial stage at the Joint Base San Antonio-Lackland, it’ll be rolled out to other bases to clean other fighter jets.

The robot apparently took one hour to clean the entire jet. Now, that job typically requires a handful of people, and a heck of a lot more hours — think days.

Not only that, but the job itself is tedious, and can even be dangerous as the cleaning materials used to spruce up the jet can cause harm to the lungs, and can be so strong that they strip off the skin, hence the full-on hazmat suits that have to be worn, Wonderful Engineering explains.

Such strong materials need to be used if the gun powder and fuel residue, engine oil, grease from the landing gear joints, and the hydraulic fuel are all to be properly removed. A fighter jet cakes up quickly, and requires a full deep-clean every 180 days or so, The Drive points out.

Properly cleaning a fighter jet also helps keep corrosion at bay, and prolong its life expectancy, as keeping a jet dirty with the aforementioned materials its metal substructures, and parts of its aluminum frame can suffer.

Take a look at this short fast-forwarded footage of an F-16 fighter jet being washed by humans (embedded below). You’ll quickly notice how much hazmat-clad personnel whiz around the jet brushing, cleaning, polishing as they go. Luckily for us, the video is sped up.

After knowing these facts, it’s easy to understand why the U.S. Air Force is turning to robots to carry out this task.

The new robot program in question is led by the AFWERX innovation initiative, which the Air Force kick-started to create military-specific technology. The washing robot in question was developed by Wilder Systems, a company that solely focuses on aerospace robotics.

As the U.S. Air Force keeps advancing its technologies, like adding robodogs to secure its bases, it’s easy to understand why a cleaner robot for fighter jets would be added to that list.