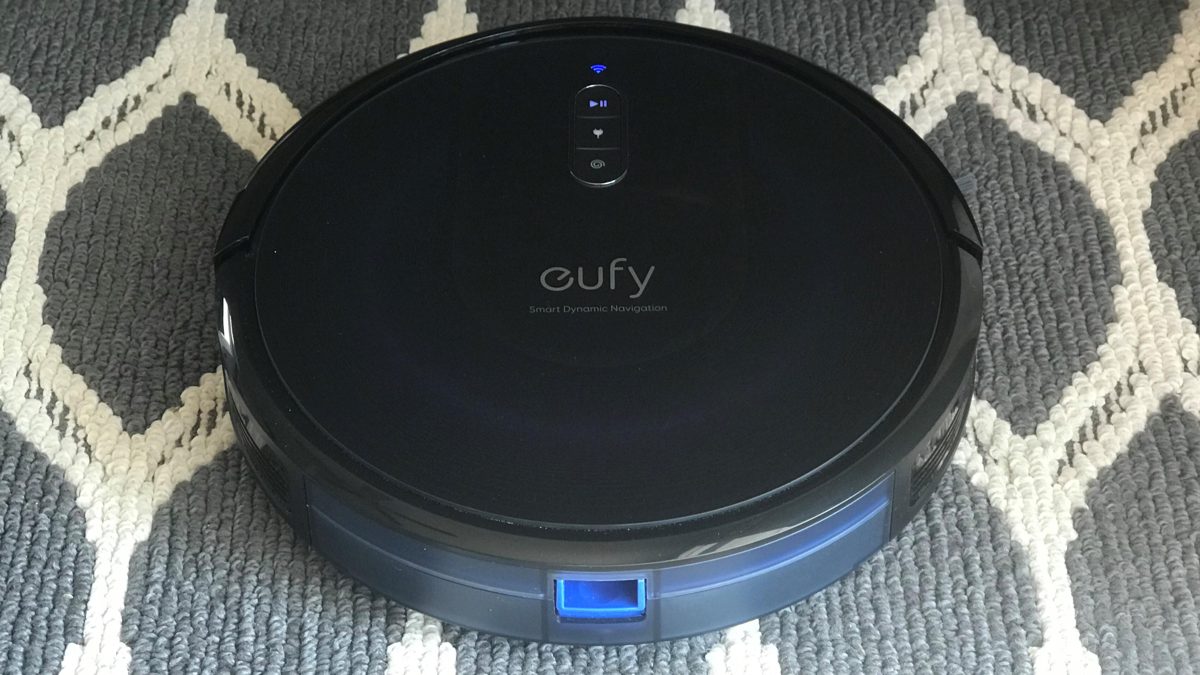 If you’re looking for a robot vacuum that can fit in tight spaces, they don’t get much more compact than the $349.99 Eufy RoboVac G30. At just 2.85 inches tall, it can clean where a lot of other robot vacuums won’t fit, like under couches. Its battery life is just okay, but it offers smarter navigation than its predecessors and a lot of power for its size. It also supports app and voice control, scheduling, and Eufy’s BoostIQ feature that automatically adjusts suction power as needed. It’s a strong contender against the $299.99 iRobot iRoomba 675, and you might prefer it if you have a small home with low furniture, but the latter remains our Editors’ Choice for its superior obstacle avoidance, longer battery life, and lower price.

Note that Eufy also makes a version of the G30 called the RoboVac G30 Edge, which costs $20 more. The main difference between the two models is that the G30 Edge is compatible with physical boundary strips you can place on your floor to prevent the robot from cleaning certain areas, like under your desk where it can get tangled in cords.

No matter the model, the Eufy RoboVac G30 is one of the smallest robot vacuums we’ve tested, measuring 12.8 inches in diameter and 2.85 inches tall. On top, it has an attractive black and blue design with three physical buttons: a Recharge button in the middle, flanked by an Auto Cleaning start/pause button above and a Spot Cleaning button below. A Wi-Fi status light is located at the top. 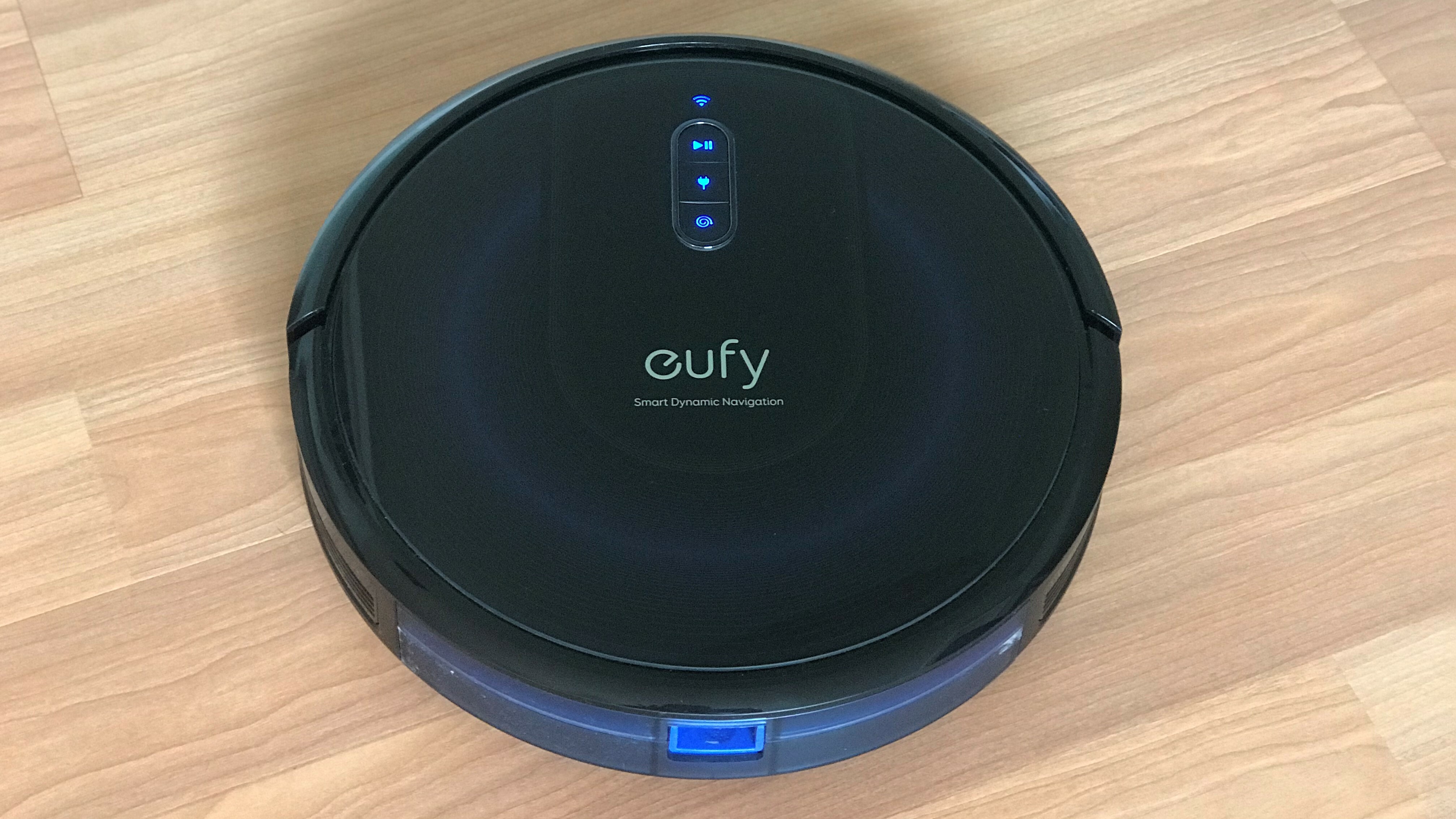 There’s a main power switch on the right side. You can keep the robot powered on most of the time, but Eufy recommends turning it off if you know you won’t use it for an extended period. On the bottom, it has a main rolling brush, a side brush, drop sensors, and a path-tracking sensor. It also has a 600ml dustbin with an E11 high-performance filter inside. The RoboVac G30 boasts 2,000Pa of suction, easily exceeding the Roomba 675’s 600Pa.

Unlike its predecessors, the Eufy RoboVac 11s and RoboVac 30C, which clean in a random pattern, the RoboVac G30 cleans your home in a systematic route. It features a gyroscope and path tracking sensors so it can move in an orderly path and record where it has passed. A Eufy spokesperson tells me that this second-generation navigation technology “significantly improves cleaning efficiency by ensuring a larger coverage with shorter cleaning time.” 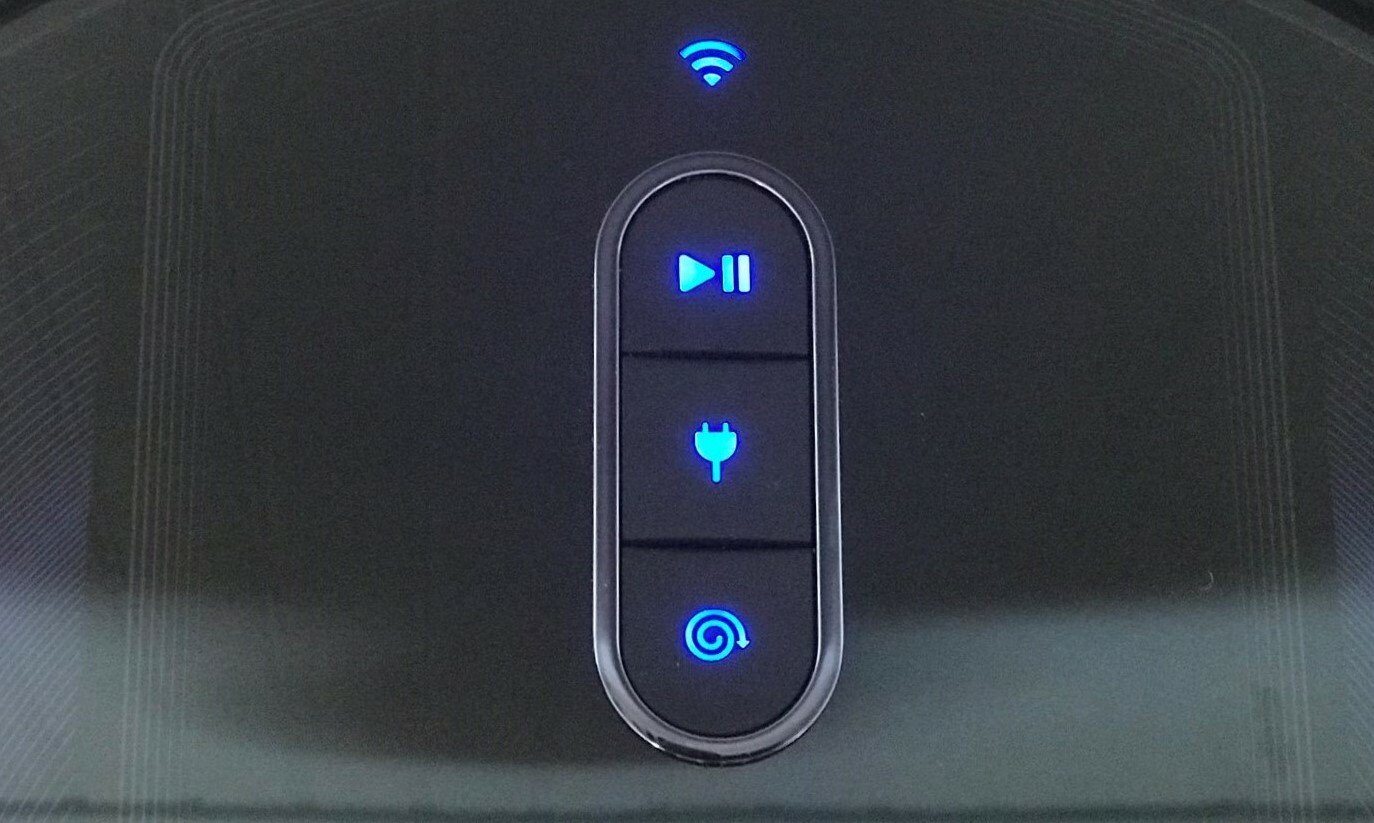 In Auto mode, the robot makes straight lines like you would when cutting grass. In Spot mode, it cleans a specific area in a spiral pattern for two minutes.

The RoboVac G30 has four suction options to choose from: Standard, Turbo, Max, and BoostIQ. By default it’s set to BoostIQ, which automatically adjusts the suction power based on your floors and the level of debris detected. With BoostIQ enabled, it will increase the suction when it moves over carpets and heavily-soiled areas.

To set it up, you simply remove the protective foam blocks, install the side brush, and turn on the main power switch. The robot will make a sound and the Wi-Fi status light will begin slowly blinking. From there, you place the charging base against the wall and plug it in. Eufy recommends placing the base on a hard, level surface (rather than rugs or carpets) three feet away from objects on either side and six feet across from anything. Then, just press the Recharge button on the top of the robot, and it will go right to its base. When fully charged, it will say Standby next to the battery icon in the app.

The RoboVac G30 doesn’t come with a remote, but you can control it via the EufyHome app (available for Android and iOS). Setting it up to work with the app is simple. Just download the app and create an account if you don’t already have one. Press the plus icon to add the robot to your account, then follow the instructions on screen to set it up on your Wi-Fi network. 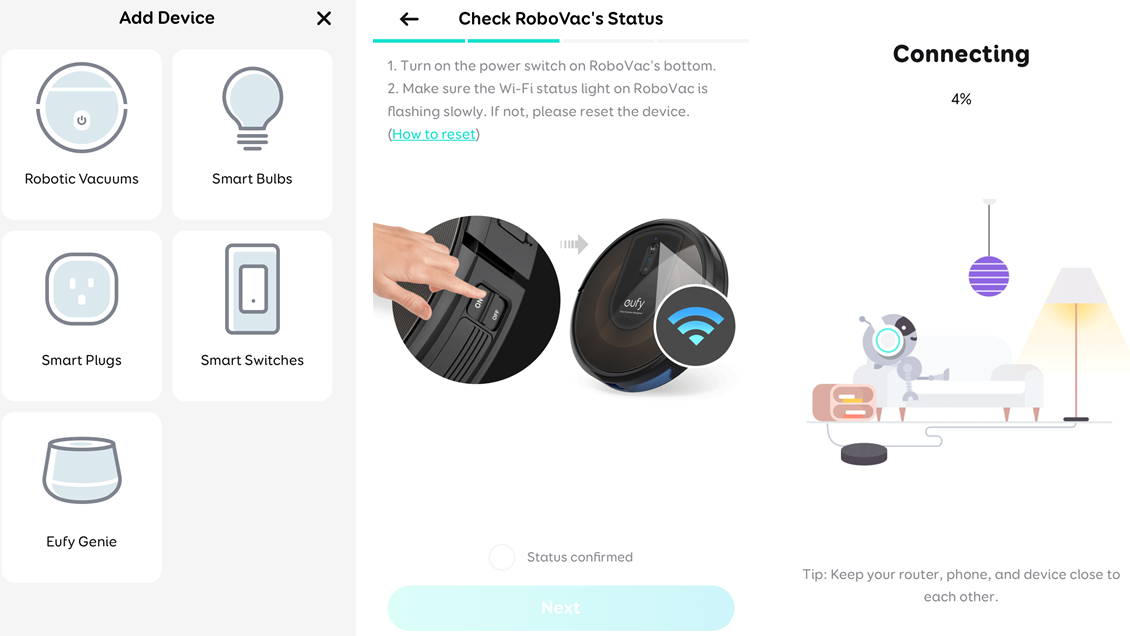 While the robot is charging, you might want to take a moment to ready your home. Eufy recommends removing power cords and small objects from the floor that may trip up the robot. In the box, the company includes a small pack of cable ties you can use to clean up cords on your floor. If you have area rugs, you’ll want to fold any tasseled edges underneath to prevent them from getting tangled.

The robot’s anti-drop sensors will prevent it from falling down stairs. The sensors are less effective when dirty or used on carpeted or very dark floors, so you’ll want to wipe them clean often and use physical barriers to block off areas where the robot might fall. Finally, be sure to keep the robot away from wet areas, and use physical barriers around fireplaces and other potentially dangerous spaces. 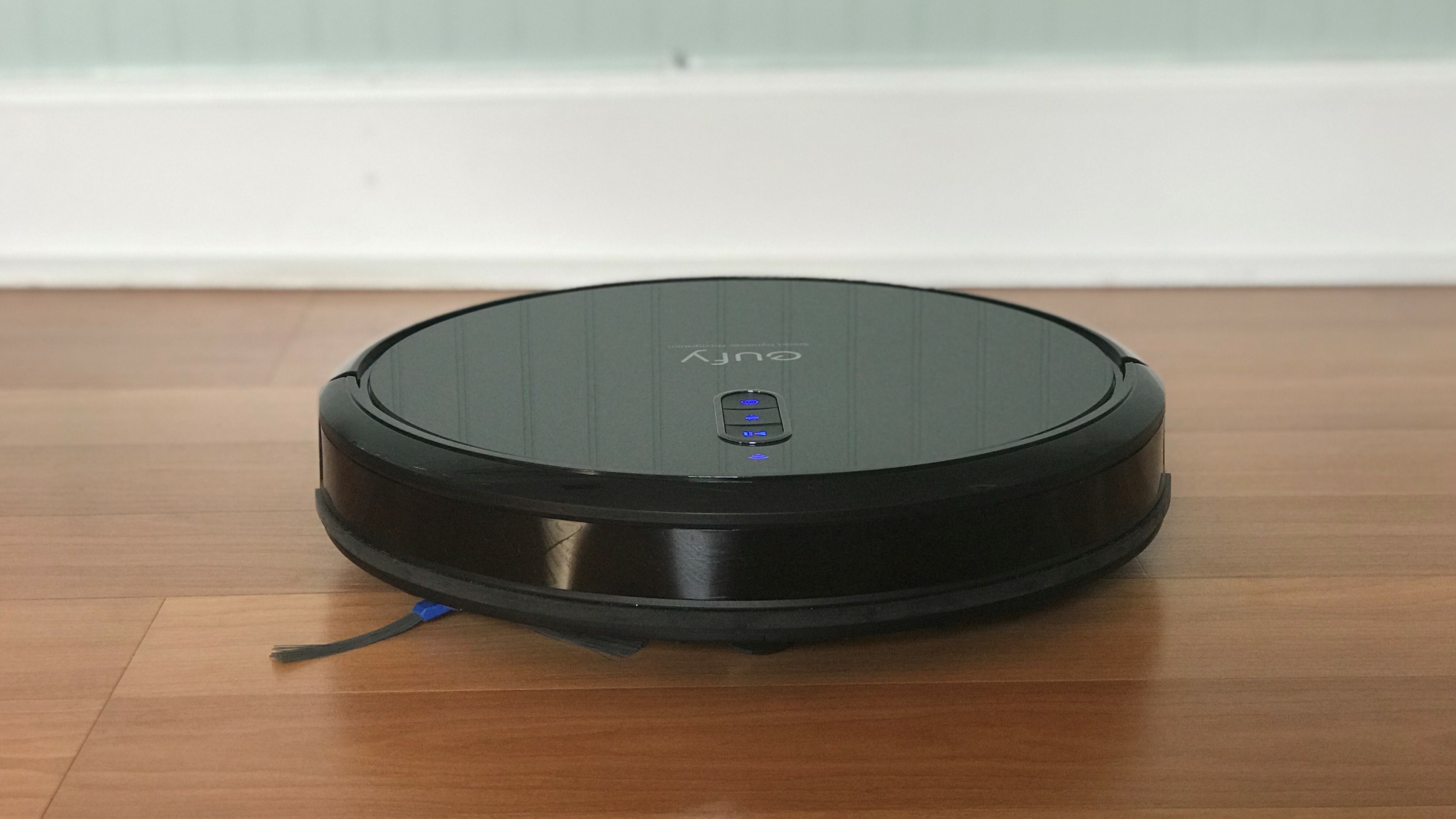 As should be expected for the price, the RoboVac G30 works with Amazon Alexa and Google Assistant, letting you control it with your voice. Setting it up to work with either voice assistant is easy, especially if you’re familiar with the process. If not, Eufy offers instructions and troubleshooting tips in the Smart Integrations section of the app (accessible from the top left menu). I already had the Alexa and Google Home apps on my phone, so it made for quick and easy setup. Once you get it connected, you can control the robot with commands like, “Alexa, ask RoboVac to start cleaning.”

Eufy recommends cleaning the dustbin after every use, and the filter and main rolling brush once a week. Every month, you should clean the side brush, drop sensors, and wheels. You’ll need to replace the filter every two months, the side brush every three to six months, and the main rolling brush every six to 12 months. Instructions for cleaning and replacing these parts are in the owner’s manual. In the box, you get a cleaning tool plus an extra filter and side brush. 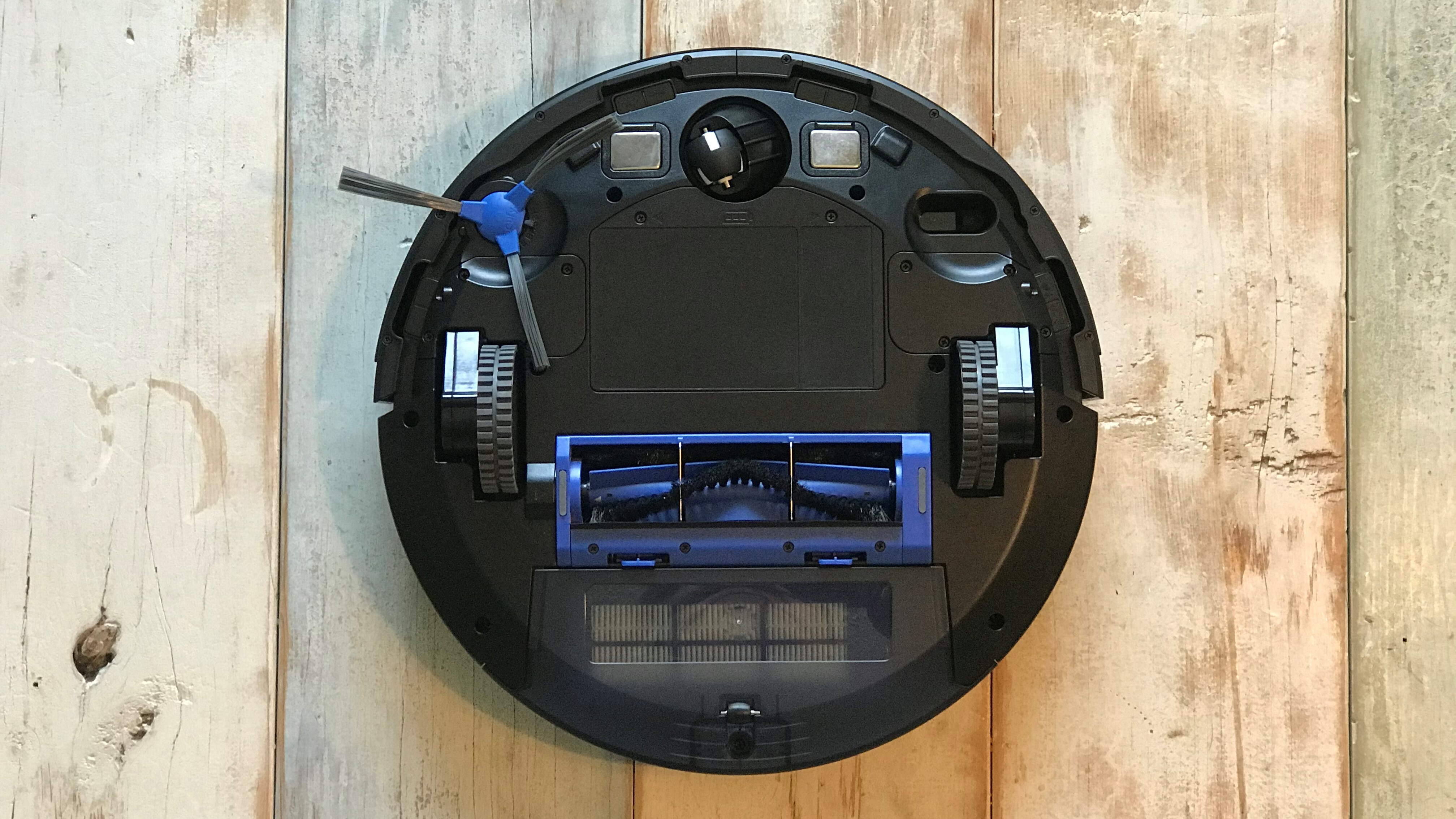 The EufyHome app is intuitive and easy to use. In the app, you can start and pause cleaning jobs, select the cleaning mode and suction level, set a cleaning schedule, and view your cleaning history.

When you open the app while the robot’s working, it shows how many square feet the robot has covered and the duration of that cleaning session. You can also see how much battery it has left. 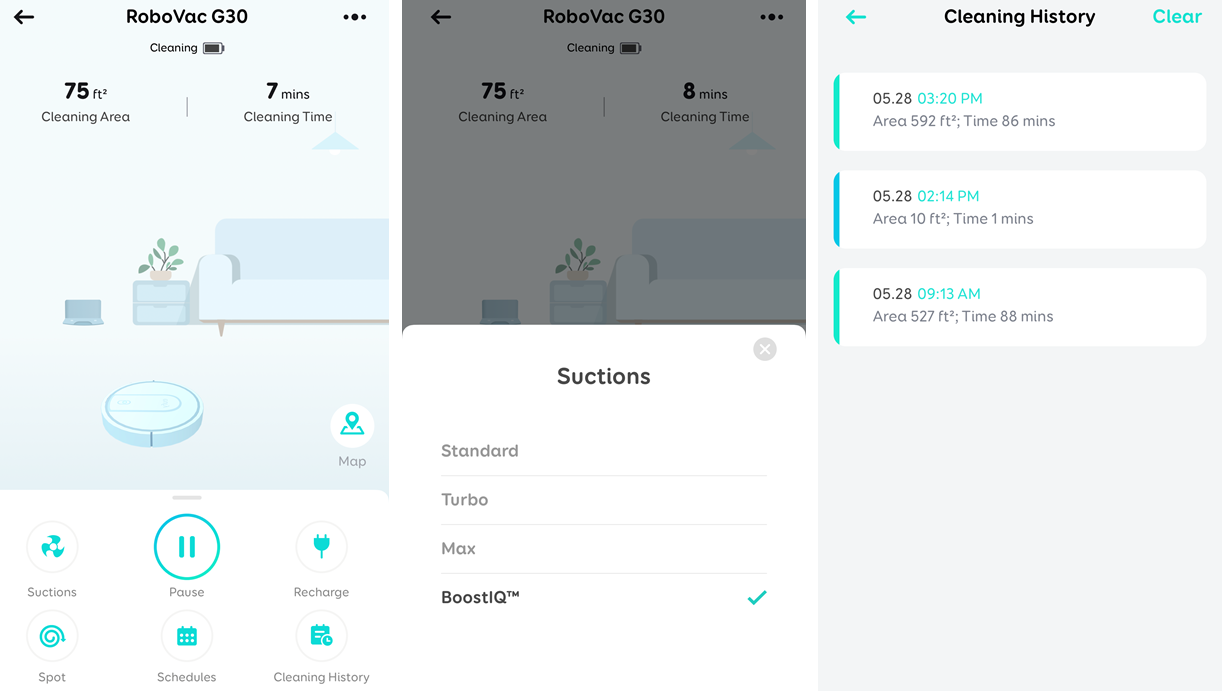 As it cleans, the robot creates a very basic map of your home in the app. On the map, there’s an icon showing where the charging base is located, which helps you figure out which room is which. You can also see where the robot is located, which can be useful if it gets stuck and you can’t find it. The iRoomba 675 doesn’t offer any mapping features, but it’s also $50 cheaper.

If you have a large home, you’ll want to go in the app’s Cleaning Settings menu and enable Auto-Return Cleaning. When enabled, the robot will resume cleaning where it left off if it has to go back to its charging base before the job is finished. In the Scheduling section, you can select which days of the week you want it to clean, and at what time. 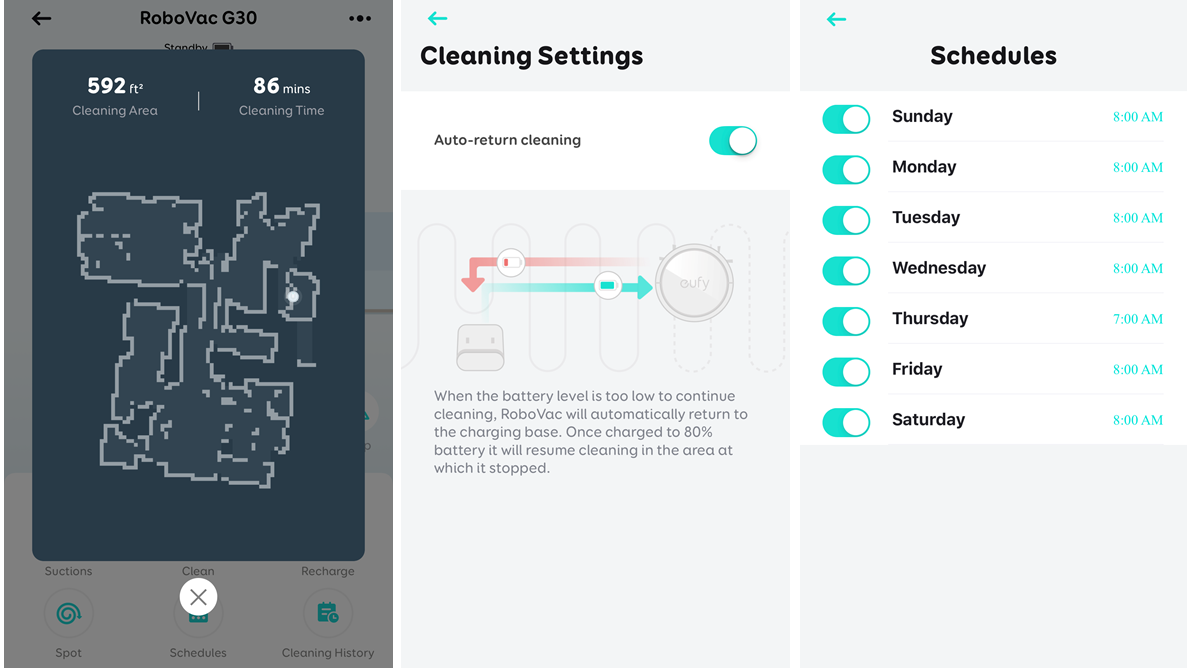 The RoboVac G30’s cleaning and navigation abilities pleasantly surprised me. It efficiently zips around your home and is able to move from one type of flooring to another with ease. It had no problem, for instance, moving from hard floors to low-pile area rugs and carpet. Its small size allows it to tackle tight spaces, like between the legs of a chair, more easily than other robot vacuums I’ve tested.

It’s the only robot vacuum I’ve used that’s short enough to clean under my living room couch without getting stuck. It even pushed several half-eaten dog bones and toys out from under it, which was funny and helpful. It did, however, get stuck under a different couch, a sleeper sofa. 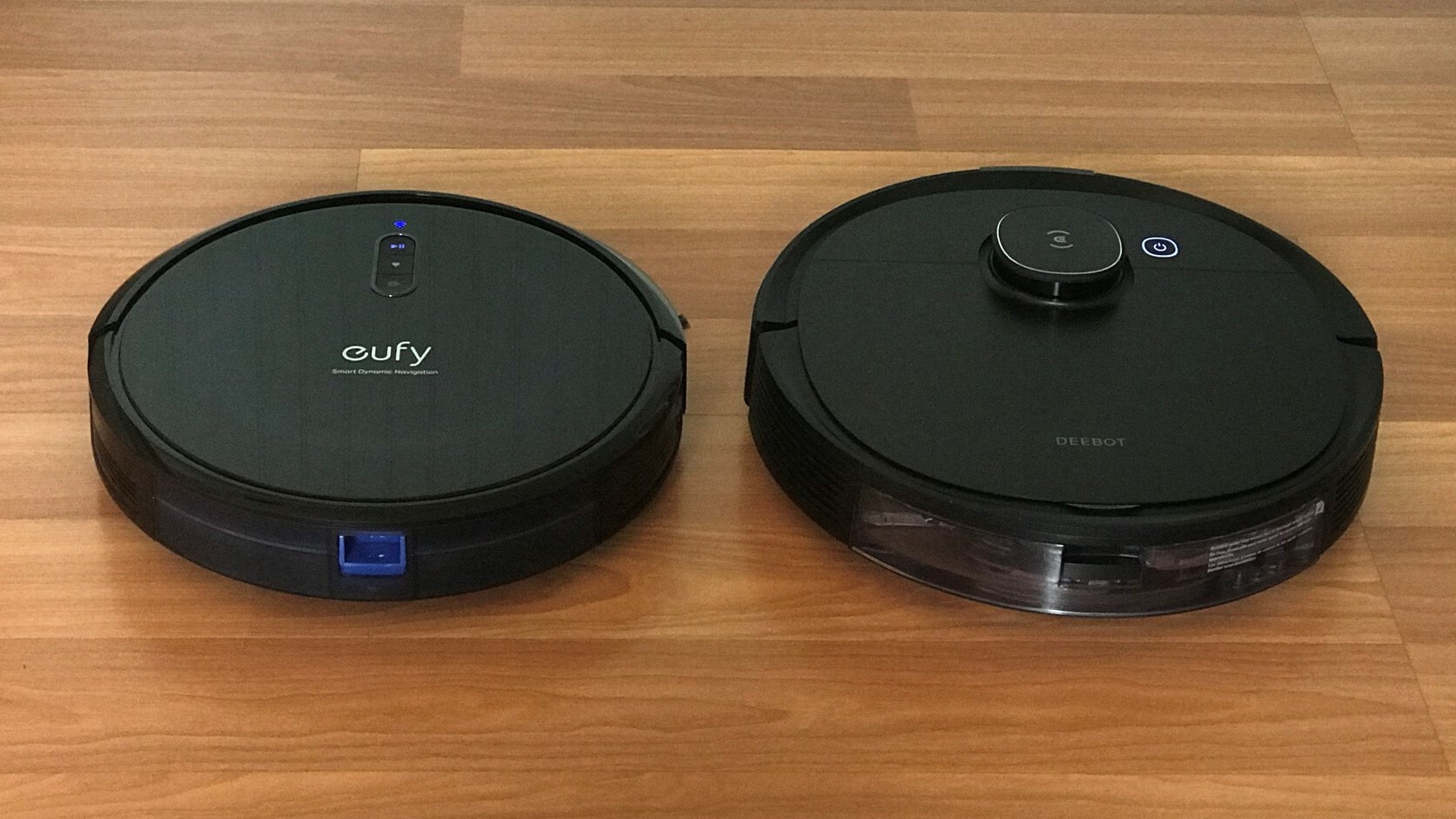 The RoboVac G30 (left), one of the smallest robot vacuums we’ve tested, next to the Ecovacs Deebot Ozmo T8 AIVI (right), one of the largest

In Auto mode, which you’ll probably use most often, it’s not too loud. One of my few complaints about the Roomba 675 is how loud it runs. The RoboVac G30, on the other hand, didn’t bother me, even with BoostIQ enabled, which Eufy warns can increase the noise level.

Eufy says the RoboVac G30 can run for up to 100 minutes on a charge, but BoostIQ decreases battery life. In testing, it cleaned for 88 minutes in Auto mode with BoostIQ enabled before it ran low on battery and successfully navigated back to its charging station on its own. In comparison, the iRobot Roomba 675 lasted 104 minutes.

After those 88 minutes, the dustbin was completely filled with dust, dog hair, crumbs, and feathers that must have escaped my pillows. My floors looked much cleaner, and my carpets had perfect vacuum lines on them. 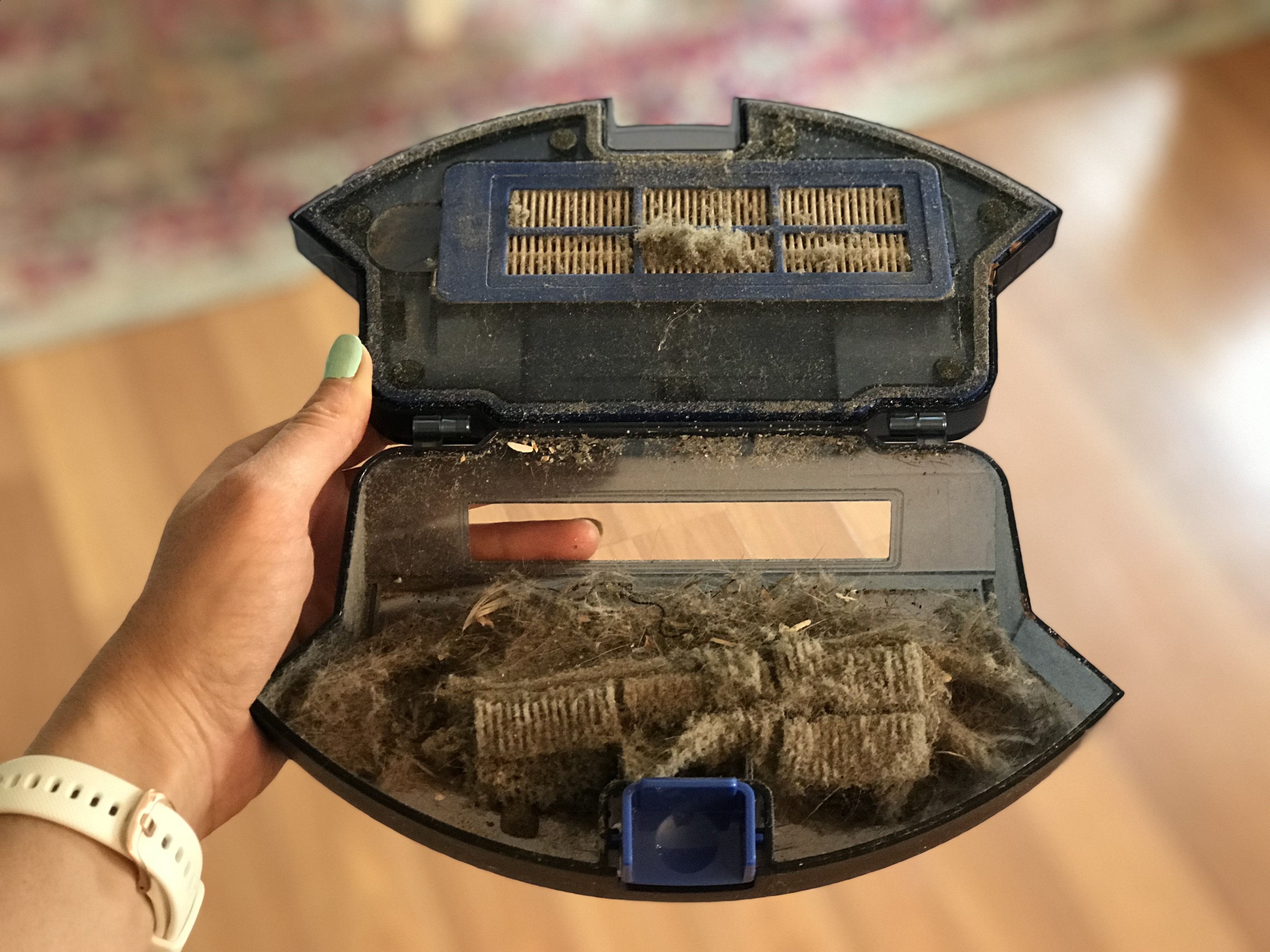 At one point during the cleaning session, the robot wanted to go under my desk, so I moved out of the way to let it do its thing. I wanted to see if it would get tangled in my power cords, and it started to, but I quickly pulled it free. I also have a mess of power cords behind my TV stand and nightstand, and the RoboVac G30 successfully avoided those without my help. If you’re worried about this issue, I suggest springing for the RoboVac G30 Edge, which is compatible with boundary strips. That said, boundary strips can be a bit of a hassle to place and an eyesore. More expensive floor-cleaning robots like the $800 Ecovacs Deebot Ozmo T8 AIVI and the $500 Proscenic M7 Pro let you set up virtual boundary zones for no-go areas in their companion apps.

In testing, the RoboVac G30 worked perfectly with both Alexa and Google Assistant voice commands. I could use my voice to start a cleaning job, and send the vacuum back to its dock. The Scheduling feature also worked as expected.

In terms of features and price, the RoboVac G30 is similar to the Roomba 675, iRobot’s least expensive robot vacuum with Wi-Fi connectivity. Both support app control, scheduling, and voice commands. The RoboVac G30 has stronger suction power, a more compact design, offers basic home mapping, and is quieter. The Roomba 675 is $50 cheaper, has better battery life, and supports virtual wall barriers. We give preference to the Roomba 675, but both are solid options depending on your needs. If you’re looking for a compact and powerful robot vacuum that can navigate tight spaces and clean under low furniture, go for the RoboVac G30.