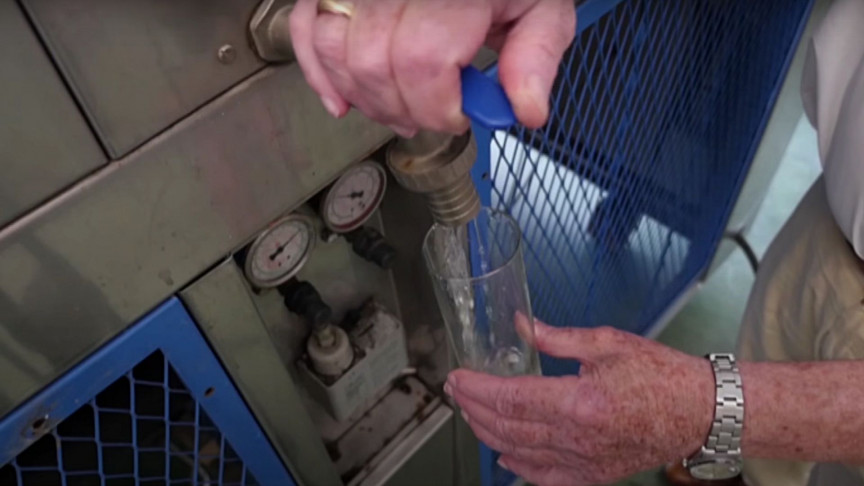 An 82-year-old Spanish engineer has devised a machine that can extract water from thin air, helping people in remote regions, potentially even in deserts, Reuters reported.

Water scarcity is a major problem across the globe. While accessing clean water is as easy as opening a tap for many of us, it requires walking for miles together to access potable water for others. Even well-established communities can face a sudden crunch for drinking water due to political conflict, natural disasters, or even climate change.

82-year-old Enrique Vega’s invention was also a result of one such calamity that struck his home country of Spain in the 1990s. Although a peninsula, Spain is prone to droughts and faced such drought in the early 1990s that lasted five years. The principle of the machine is the same as that of the air conditioner. It uses electricity to cool the surrounding air but takes it a step further to successfully condense the water vapor.

Vega’s invention could not work under higher ambiance temperatures of 104°F (40°C) though, a common occurrence in water-scarce areas such as deserts. So, he improved the machine’s capabilities and founded Aquaer in 2004 to offer his creation to the world as a promising solution.

Apart from providing water solutions to the food and healthcare industries, the company has also provided installations to villages and small towns through a non-governmental organization (NGO), Water Inception. What’s more, a smaller model of the machine can provide 50-70 liters of water per day, while a larger installation can produce up to 5000 liters per day, reports Reuters.

“The goal is to get to places like refugee camps that don’t have drinking water,” Vega told Reuters. When the company installed one of its units in the Namib desert, it took the locals by quite a surprise. Aquaer’s recent models can work with an air humidity of 10-15 percent as well, the company claims. “Our idea is not only to make a device that is effective, but also to make it useful for people who have to walk for miles to fetch water or make wells,” Veiga added.

With Water Inception, the company has also installed a machine with a 500-liter  capacity per day in a refugee camp near Tripoli in Lebanon. The NGO is now raising funds to install solar panels on the machine and reduce the electrical as well as environmental costs of the process.