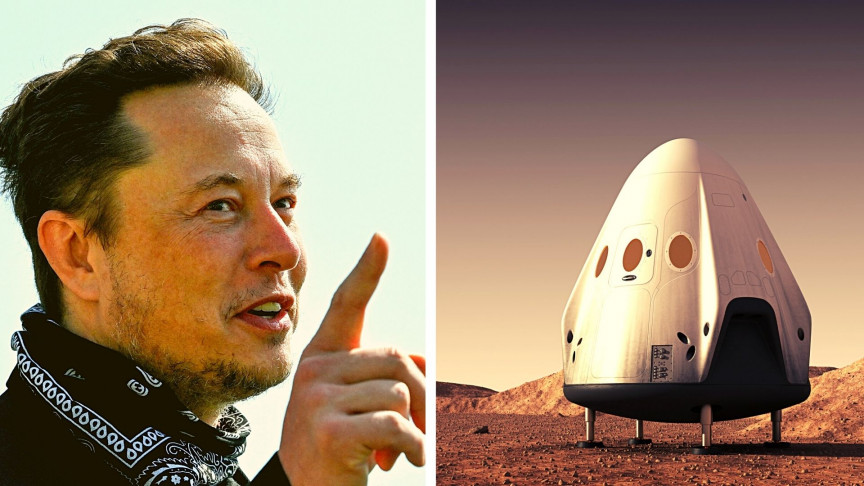 Eventually, everyone has a chance to follow through on their promises.

Coincidentally, Elon Musk says his plans for Mars can coincide with the global push to lower the concentration of carbon dioxide in the atmosphere. “SpaceX is starting a program to take CO2 out of [the] atmosphere & turn it into rocket fuel,” tweeted the CEO and tech billionaire on Monday. “Please join if interested.”

It’s unclear exactly how Musk plans to do this, but it’s also hard to deny the appeal of such a capability. Imagine a world where all excess CO2 generated by a nation or region is directly converted into rocket fuel and subsequently consumed during launches, leaving nothing harmful behind.

“Will also be important for Mars,” added Musk in a tweeted reply to himself, encouraging high hopes. And, it turns out hope might not be totally unmerited, since there are already ideas in-play about how we might convert CO2 into rocket fuel on the surface of Mars.

While Musk’s announcement may feel a little random, it’s surprisingly appropriate, considering the abundance of CO2 emitted by the billionaire-to-Earth-orbit pipeline that’s scaling up at unprecedented speeds. Even more shocking, this idea of Musk’s isn’t as outlandish as it may at first seem. A new technique, called “direct air capture,” would enable SpaceX to absorb thousands of tons of CO2, and convert it into a kind of rocket fuel, according to Bloomberg. In fact, the country behind the best Zuckerberg satire ever has already begun operations of its DAC plant, which, sucking in 4,400 tons of CO2 annually, also happens to be the largest one in the world, according to a Futurism report. And another one in Scotland will begin operations in 2026, with aims to remove 1.1 million tons (1 million metric tons) per year.

This comes on the heels of Musk announcing a $100 million prize for whoever could bring a world-historic-level carbon removal technique to the global table, early in 2021. “I think this is one of those things that is going to take a while to figure out when the right solution is,” said Musk in a Reuters report, at the time. “And especially to figure out what the best economics are for CO2 removal. Right now we’ve only got one planet. Even a 0.1 percent chance of disaster — why run that risk? That’s crazy!” During an April discussion with Chairman Peter Diamandis of the XPrize Competition, Musk hinted at his interest in finding a renewable means of lifting people and material into space.

Of course, Musk isn’t the first person to consider the conversion of carbon into more marketable substances, or products of value to the economy. After all, it makes more sense to use everything involved than to simply bury waste products like CO2 underground. And many companies and scientists have taken strides down this line of thought. For example, we could embed solid forms of carbon in building materials, including steel and cement, an industry already deemed emissions-heavy, said Professor of Applied Physics and Materials Science Harry Atwater, of the California Institute of Technology, in a Popular Science report. “What if we could actually take the carbon dioxide emitted through all the past synthesis of construction materials and then turn it back into materials that we could use like carbon fiber composites and other forms of more benignly stored carbon,” asked Atwater, in the report.

“That would be an indefinite form of storage,” he added. But for Musk to convert CO2 from the air into rocket fuel, he’ll have to get crafty. Right now, SpaceX’s Starship uses supercooled liquid methane and LOX to propel itself away from the Earth. Earlier models like the Falcon 9 also use LOX, but combined with refined kerosene. These fuels won’t exist in abundance on Mars, which is why scientists have developed concepts that could capable of using Mars’ CO2-rich atmosphere. In October of this year, a team of engineers suggested using a carbon catalyst inside of a reactor, to convert carbon dioxide into methane, which can then be employed in the next generation of rocket engines, perhaps like SpaceX’s Raptor engines. This idea relies on what’s called a “Sabatier reaction” — something already in use by the crew of the International Space Station to filter CO2 from the internal atmosphere of the station. It even generates drinking water.

If Elon Musk’s private aerospace firm can leverage this knowledge to convert CO2 in Earth’s atmosphere into rocket fuel at scale, it could create a new and exciting incentive for space tourists — effectively transforming an environmentally dubious activity (going to space because you’re rich enough while polluting the Earth) into an inherently eco-friendly act that also generates a fresh source of drinkable water. Pretty neat, at least, in theory.

Obviously, this could radically transform the public face of SpaceX. But the pilgrims of the Red Planet will face the same hardships: At the of his XPrize interview, Musk said his firm had a long-term plan to use as much renewable energy as possible to power rocket flights to space, which for Musk always means Mars. He also said stressed his classic argument about mass extinction events, and how humans won’t survive unless we become a multi-planet species. But when asked if his plans for Mars were “just some escape hatch for rich people,” the billionaire and now-TIME Magazine “Person of the Year” answered that relocation to Mars won’t exist exclusively for the rich. Likening missions to Mars to the first journeys to Antarctica, Musk emphasized that would-be Martians will confront an uncomfortable, dangerous, and exciting reality: that there’s no guarantee of returning. “A bunch of people will probably die,” he warned in the live stream. With this in mind, we can only hope that carbon capture technology can absorb enough pollution from rocket launches that the space adventures of tomorrow don’t come at the expense of the Earth’s habitability.