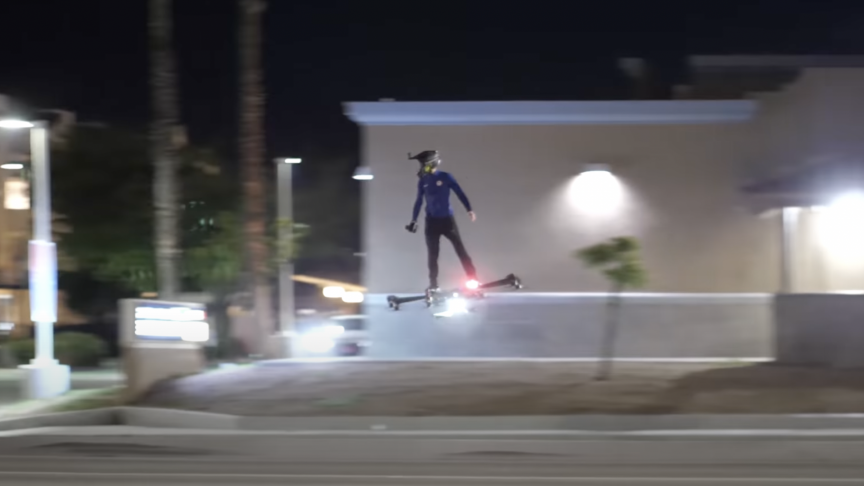 Los Angeles-based digital creator Hunter Kowald unveiled a fully functional “hoverboard” made from industrial grade components, Design Boom reports. As a host of viral videos of Kowald flying his machine show, the hoverboard is actually semi-comparable to the levitating device from Back to the Future.

Unlike LEXUS’s hoverboard prototype, which relies on pre-installed maglev tracks, and those popular two-wheeled hoverboard devices that don’t actually hover, Kowald’s “hoverboard aircraft” can fly you almost anywhere you want to go.

Kowald’s machine is undeniably more a mountable drone than a flying hoverboard in the true sense, but the flying board is such a staple of popular culture that anything vaguely resembling the sci-fi machines seems to go by the moniker these days.

In a recent Instagram post showcasing his machine, Kowald said “I’ll never be able to explain the insane amount of work this took. People told me you can’t break the laws of physics. And well.. after a global effort of custom part manufacturing and plenty spontaneous fires & explosions… watch me dance.”

The flying machine has, unsurprisingly, garnered plenty of attention online — several videos of Kowald flying his hoverboard have gone viral in recent days.

In the description of a video (above) showing the hoverboard in flight, Kowald claimed that his machine lifts up to 226 kg (500 lb).

The manned drone was built with a custom carbon fiber structure and was engineered with safety and efficiency in mind — in the event that two motors or one power system were to fail, the hoverboard would still be able to land, Kowald said. The hoverboard is also equipped with lighting certified by the FAA.

In an emergency situation, meanwhile, the machine’s propellers are capable of breaking the speed of sound and “sustain supersonic to compensate forces lost,” Kowald explained.

It goes without saying that flying machines are dangerous even if they have numerous failsafe features in place — last year, French stuntman Vincent “Vince” Reffet died in Dubai during a training accident with a jetpack. Still, UAV technology is arguably safer, and is definitely more sustainable, than jetpack technology, meaning we may see more designs like Kowald’s in the near future.