DIY Man Launched a Water Rocket With a Functional Parachute 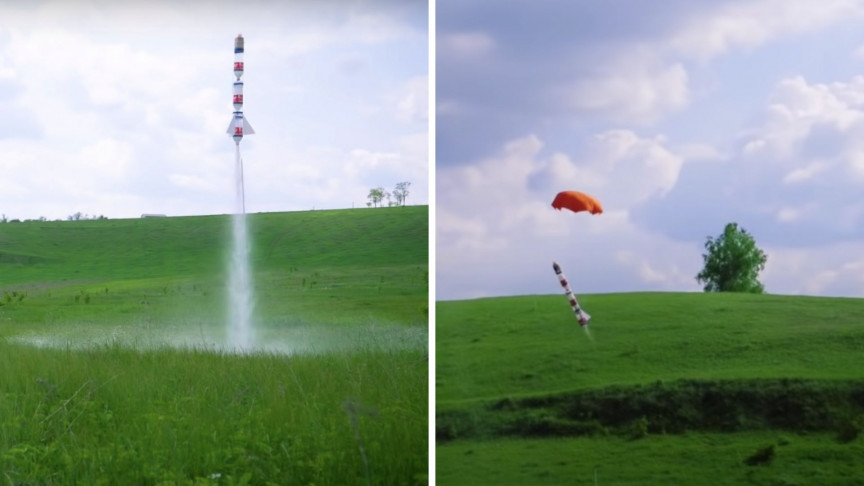 Far from the Space Race where billionaires are outwitting one another to build colonies and private stations in space, a quiet YouTuber has built a water rocket that uses a parachute to gently return to Earth.

We are always on the lookout for interesting bits of engineering. While we cover the achievements of private companies with as much enthusiasm as we have for space technology, there is something very soothing and peaceful about watching a water rocket go up from a launch site that is nothing more than a lush green meadow and an overcast sky.

Thanks to the YouTube channel The Q, you can sit back and enjoy this beautiful launch powered by just air and water; in case you want to go back to the school days and do it all over again over the weekend, the video presents instructions on how to make the rocket as well.

The science behind the water rocket is elementary level; as you will see in the video, after filling one-thirds of the rocket with water, air is also pumped inside with a bicycle pump. Sealed from all sides, the air pressure increases inside the rocket, and as the rocket is launched, the compressed air tries to quickly return to normal atmospheric pressure but finds its path blocked by water. So, the air pushes the water out first before it can escape.

This is where Newtonian physics comes in. As the air exerts a force on the water in its bid to escape, the water exerts an equal and opposite force on the air. Since the rocket is made of plastic that weighs less than the water, the force exerted on the rocket displaces it further. How quickly the rocket travels depends on the pressure of the air compressed inside, prior to launch.

The engineering bit is also quite simple and needs just a few tools to start off. Apart from the big soft-drink bottles, you will also need a lot of tape, a wine bottle cork, a little cardboard, and an old umbrella.

If you are not that adventurous and are looking for a project that works for you in the long term, you can always make your own soft-drink vending machine or a sim racing cockpit or moto rig to play your favorite video game.