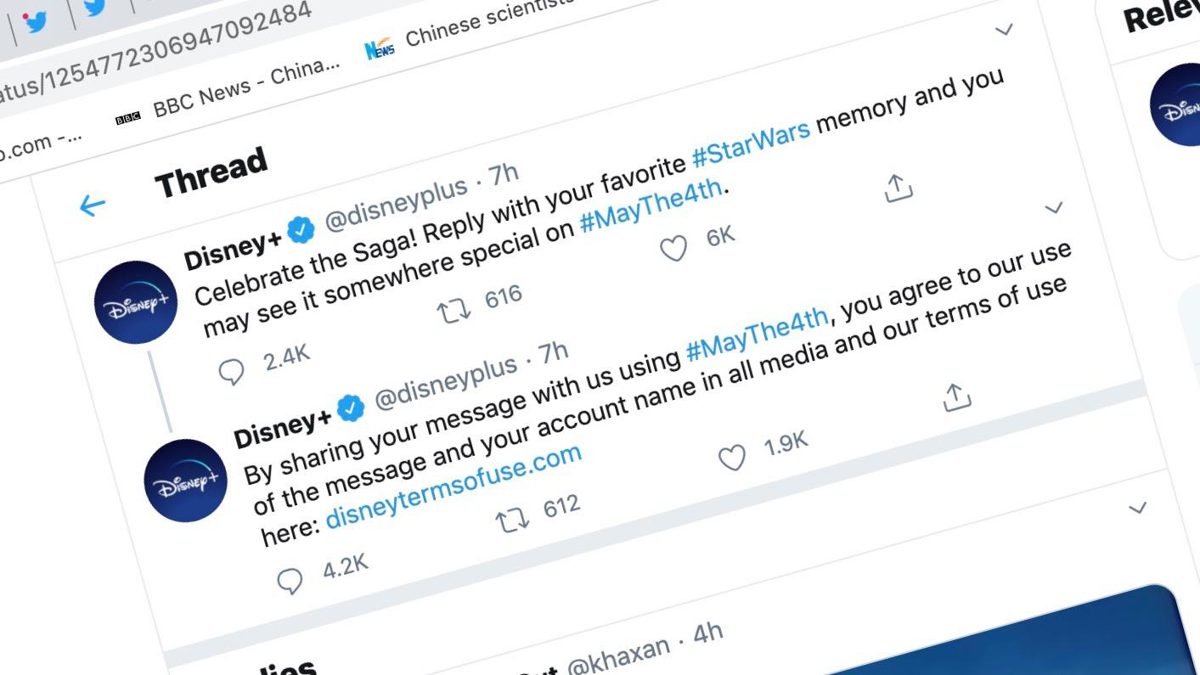 A Disney attempt to celebrate the Star Wars saga has instead sparked anger and accusations that the company is trying to claim media ownership over the #MayThe4th hashtag.

The outrage emerged on Monday when the company’s Disney+ business encouraged users to share their favorite Star Wars memories on Twitter. The only problem? Disney went out of its way to include this curiously-worded statement:

“By sharing your message with us using #MayThe4th, you agree to our use of the message and your account name in all media and our terms of use here: http://disneytermsofuse.com,” it said. The terms of use then go on to state the company can use your user-generated content “royalty-free,” and virtually without any limit.

Fans have not been pleased. Many have come away with the impression Disney is trying to claim ownership rights to any tweets that use #MayThe4th hashtag, which is a reference to the May 4th Star Wars celebration held each year.

“My favorite Star Wars memory would have to be the time Disney tried to lay legal claim to every tweet on Twitter that used a particular hashtag,” wrote one user in response.

Under Twitter’s own policies, users own the unique content they post on the social media service. “What’s yours is yours — you own your Content,” the company says.

However, the statement from Disney suggests the company is trying to create contractual terms for a popular hashtag, which is “ridiculous,” said Alexandra Roberts, a law professor at the University of New Hampshire.

“Disney hasn’t registered #MayThe4th as a trademark, but even if it did, that wouldn’t prevent laypeople from using it as a hashtag to label content that they post,” she told PCMag. “So Disney just tweeting into the abyss doesn’t magically subject Twitter users who never saw its tweet to have agreed to comply with its terms.”

“At worst, they’re intentionally trying to grab rights in a way that is totally outside of legal scope,” added Casey Fiesler, an assistant professor at the University of Colorado Boulder who studies computing and law. “At best, this is an extremely poorly worded tweet that represents a ridiculous rights grab even if it was within their power.”

Disney did not immediately respond to a request for comment. But the company has since updated its tweet to say: “The above legal language applies ONLY to replies to this tweet using #MayThe4th and mentioning @DisneyPlus. These replies may appear in something special on May the 4th!”

Still, the company may be needlessly complicating the matter. “I personally think that these kinds of rights grabs are still kind of silly, and that to avoid confusion they should just ask for permission from anyone whose content they want to use beyond what might already be permissible,” Fiesler said.