Deepfaking a Celebrity on a Zoom Call is Now Possible 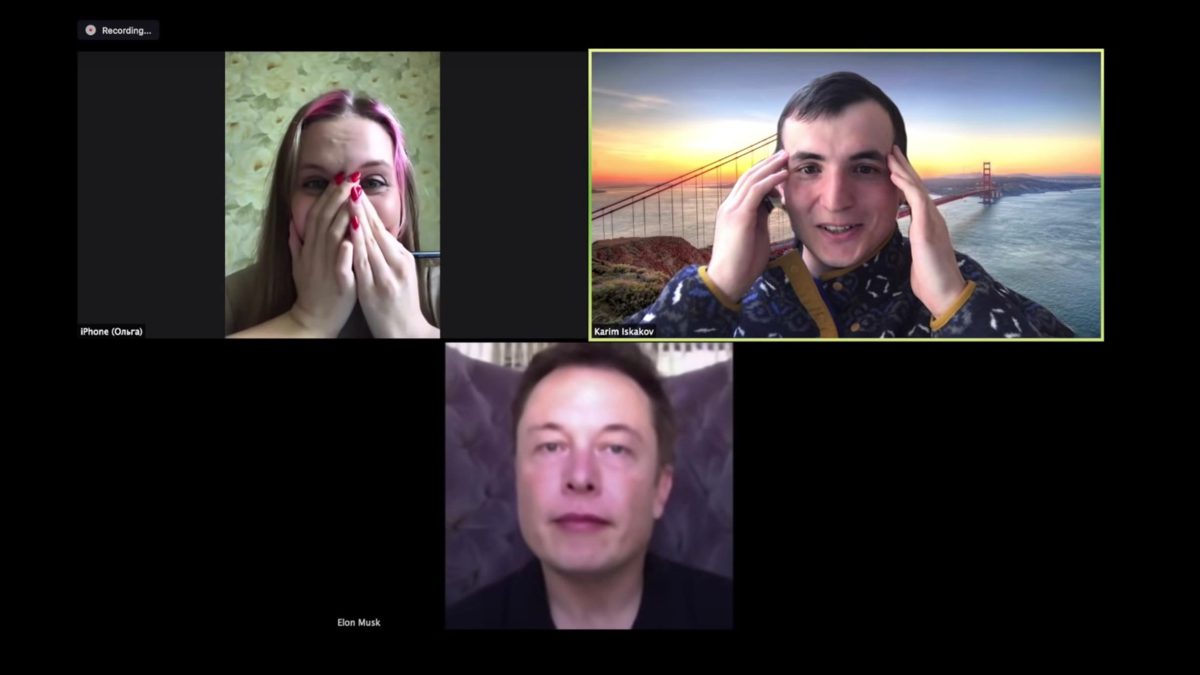 You can now impersonate celebrities, including Elon Musk, during Zoom video sessions, thanks to some deepfake-creation software.

The programmer Ali Aliev showed off his “Avatarify” technology in a couple demos uploaded to YouTube. In one clip, he uses the software to map his facial movements on to a picture of Musk during a Zoom video call.

The deepfake technology then proceeds to animate the picture in real-time to match his own facial movements.  “Looks like I got into the wrong conference,” Aliev says, pretending to be Tesla’s CEO.

The Avatarify software works by taking a still image of the target you want to deepfake, say the Mona Lisa, and bringing it to life using your own movements. The algorithms can do this by processing video footage of your face in real-time. As the video gets processed, the technology will create corresponding video images of the Mona Lisa to match your facial gestures.

The results can deepfake any celebrity you’d like. In another YouTube clip, Aliev shows how his deepfake-creation software can take footage from his computer’s webcam and then translate his facial movements on to still images of Albert Einstein, rapper Eminem and Apple co-founder Steve Jobs.

The results, while not exactly life-like, are still amusing to watch. Aliev is now encouraging others to try it out. Last week, he uploaded his software’s source code on to his GitHub page, which contains detailed instructions on how to use it.

Still, Avatarify has some significant requirements. For instance, you’re going to need a fairly powerful graphics card to render the deepfakes at an adequate frame rate. According to Aliev, an Nvidia GTX 1080 Ti was able to pump out the deepfaked images at 33 frames per second. Meanwhile, a MacBook Pro with no graphics card could only reach a measly 1 fps.

In addition, you’ll need to download some third-party tools, including video streaming software. Finally, to pull the deepfake antics on Zoom, you’ll have to download version 4.6.8 of the video conferencing software, which still has built-in support for virtual cameras.

We’ve asked Aliev if he’s concerned his creation could be used for no good, and we’ll update the story if we hear back. In the meantime, he told Motherboard his goal with the technology is to help entertain people during the pandemic. “It just allows people to have some fun while being locked down at home,” he said.

Update: According to Aliev, Avatarify won’t be very effective for malicious purposes because the deepfakes are “easy to spot.”

“If I show you a picture of me playing golf with Donald Trump would you believe? Of course you would say ‘this is a photoshop,'” he said in an email.

“At this moment, neural face animation is quite impressive, but still easy to spot due to artifacts like unrealistic mouth movement and non-native voice,” he added. “I’m sure the algorithms will become better and better, but this progress won’t be hidden from people.”