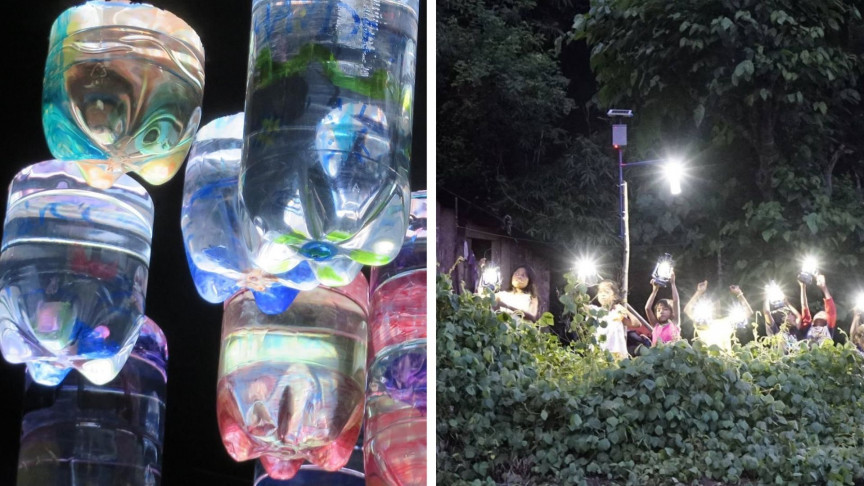 Ever since it was founded in 2013 by Illac Diaz, Liter of Light’s low-tech, highly accessible “daylighting” water bottle lamps have been providing light to poor households around the world without access to electricity.

In an interview with Diaz, the founder of the project, organized by Philippines-based nonprofit MyShelter Foundation, delved into the inspiration behind Liter of Light.

Aside from providing an empowering lighting and business initiative for low-income communities, the project also forms part of an upcycling strategy to re-use unsustainable plastic waste.

“Around 20 million Filipinos still live without access to energy, let alone clean forms of energy,” Diaz tells us in an email exchange. “They resort to candles or kerosene lamps, which are extremely costly and can lead to fires, third-degree burns, and indoor smoke inhalation.”

Around the world, this problem is compounded with almost 1 billion individuals living without access to energy, Diaz tells us. His solution, which has been helping to light communities since 2013, is a “simple daylight system using plastic bottles, water, and 5mm of bleach.”

The device is built using a transparent two-liter bottle filled with the water and bleach solution, fitted into a hole in the roof. Functioning as a deck prism, the bottle refracts light during the day, delivering as much light as a 40-60 watt incandescent bulb to the interior.

It all started while “helping to build classrooms in the provinces,” Diaz says. One of the things Diaz noted at the time, was that even though the students had a physical space to learn, they didn’t have lights to use during the day as the schools were typically off-grid, or electricity was considered too expensive.

“By building simple daylights, we were able to help these classrooms and eventually homes save significant income on their energy needs. With those savings, they could then upgrade to our community-built solar lights.”

When Super Typhoon Haiyan hit in 2013, Diaz says the conditions were so devastating — 10,000 people lost their lives and thousands more were displaced — that it drove the MyShelter Foundation to be the first on the ground. They helped the most affected communities to assemble hand-built solar street lights.

“We hit 7,000 lights in just a couple of months after the disaster struck, and were able to reduce the incidence of violent crimes by 70%,” Diaz says. “By building our lights, we were able to help with access to energy but also to the possibilities it brings: education, health, safety, reduction in crime to name a few.”

What’s more, the plastic waste problem in Manila, the capital of the Philippines, is so bad that it contributes to flooding in the city — with garbage clogging drain pipes that would otherwise take the floodwater out to sea.

“By upcycling plastic bottles for our main solar lighting systems (home lights, mobile charging systems, and street lights), we are reducing the waste stream that contributes to flooding and devastation from storm surge,” Diaz explains.

Liter of Light takes a community-based approach to solar lighting. The project aims to not only give communities the gift of accessible lighting but also to teach them how to maintain the light and also spread the initiative further.

“When we started Liter of Light, we embraced three principles,” Diaz explains. “First, our technologies should be easy to teach and train people how to build. Second, they should be able to be built, repaired, and assembled locally. Third, the communities we work with should be able to generate a livelihood from this work.”

The project trains individuals on how to build the solar lights by hand so that they understand how they work, and what needs to be done to repair any broken lights. By working closely with communities, the project also gains information about communities that are most in need of light, and resources.

By teaching individuals, “they are no longer recipients of outside technologies but empowered to maintain ownership over the technologies and how to use them. Moreover, because they have been trained in new skills, they can earn a new means of livelihood,” Diaz explains.

As part of the Liter of Light third principle, the project trains a cooperative group of five women on how to build its technologies. The approach is inspired by other proven sustainable business models, such as the Grameen banking model. Instead of providing the group with financial capital, the project seeds them the materials and tools required to build the lights.

“Upon completing their training, the women are able to sell what they produce the solar reading lanterns, including a suggested 20% retainer fee which they keep for when which they use to pay off the initial capital investment,” Diaz says.

“A competing product with the same specific components with finished manufacture would cost almost three times the cost. The other complementary business model would be for one store to have a central 50- or 100-watt panel that will be a central recharging station where the store owner can recharge the solar lamps for a fee.”

The project is doing tremendously well, Diaz says: “in our experience, the number of solar lanterns, mobile chargers and streetlight solutions that are replicated are 6-10 times the number of those initially given in workshops due to these factors and not dependent on the initial investment.”