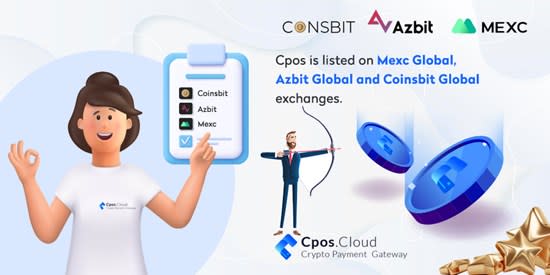 Cpos aims to build the future of payment platforms backed by blockchain technology, creating a new virtual payment network across the globe.

Dover, Delaware–(Newsfile Corp. – April 7, 2022) – Cpos is a blockchain-based company located in California that develops high-quality and creative crypto virtual payment platform products while also mediating the exchange of crypto assets in the blockchain ecosystem. For this reason, Cpos built a crypto stake pool, allowing virtual enterprises and individuals that utilize the Cpos payment platform to use its Cpos tokens by manufacturing them on the blockchain-based Ethereum, Binance smart chain, and Tron network infrastructure. To put it another way, people would be able to purchase goods and services with Cpos tokens on an online shopping site in the future. Furthermore, they would be able to swiftly turn Cpos tokens into nominal assets by staking them through firms that use the Cpos payment platform.

Cpos cloud payment aims to upgrade the current and popular payment methods. The Cpos cloud payment aims to protect money from hackers and identity thieves who have wreaked havoc on the online business world. This is a future cryptocurrency that will allow the fund owner’s dream to become a reality. This new system will alter the pattern of transactions and trade because it provides numerous benefits, including:

Cpos uses blockchain technology to allow users to connect to the network peer-to-peer, eliminating the need for intermediaries. Cpos is merely a blockchain-based digital wallet provider platform. Users do not use Cpos to conduct business or access their funds. Cpos does not act as a “third party” or intermediary for users. This sets it apart from traditional financial institutions. Even if the Cpos server is compromised, the users’ money is safe because security is provided by a network known as the Distributed Ledger, controlled directly from each device.

This is the digital wallet era, which functions similarly to a bank account but not as a physical wallet. Cpos, unlike traditional bank accounts or financial services, uses blockchain technology to allow users to receive, keep, and transfer crypto money to anyone, anywhere, and at any time.

Traditional banks typically provide national financial services, with few global or international banking services. Meanwhile, anyone conducting online business must use both, mainly if the services are aimed at international customers. Cpos, on the other hand, offers a solution to this problem. Cpos has no control over the digital assets of the user. In contrast, the user’s digital assets are immediately connected to the network. As a result, the likelihood of theft or neglect is reduced. Furthermore, Cpos does not create its own money; instead, it builds a platform on the Ethereum blockchain. The benefits of Ethereum have been recognized all over the world.

Cpos offers a variety of services for the convenience and efficiency of all parties. Cpos collaborates with third-party supervisors. In addition, Cpos works with third-party service providers to provide broader financial services, operate legally, and meet service quality standards. Cpos ensure users have a memorable experience.

The 2019 Online Shopping Behavior Survey Data in Cpos, according to the Tempo Data and Analysis Center (PDAT), show that electronic payments are on the rise in Cpos. The growth of the e-commerce business in Cpos has changed many people’s lifestyles, from shopping to payment methods. This is demonstrated by introducing several large-scale e-commerce sites, such as Tokopedia, Blibli, Shopee, and others, with many electronic payment system alternatives. Various factors are expected to influence the growing trend of online shopping and electronic payment systems in Cpos. Among them are recent advancements in telecommunications and network infrastructure.

However, the Cpos project’s crypto value, the cpos token, is still traded on three global stock exchanges. Mexc Global, Coinsbit.io, and Azbit are three of these exchanges. Again, as stated by company officials, the Cpos token will be listed on additional global exchanges.

For more information about the project, you can reach out via the following channels:

To view the source version of this press release, please visit https://www.newsfilecorp.com/release/119467