Comparing the Chinese Tiangong Space Station to the ISS 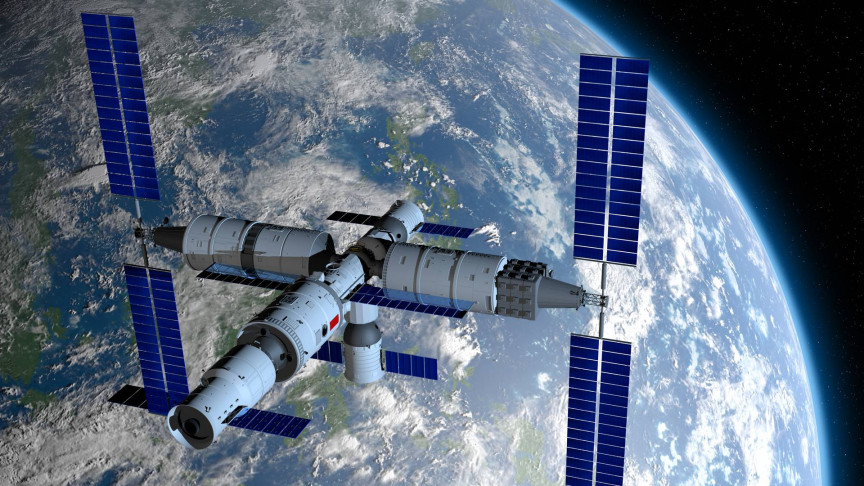 For 22 years the International Space Station (ISS) was the only station in orbit (except for a brief period from 1986 to 2001 when the Russian Mir station was in operation). A multinational collaborative project involving five participating space agencies (United States, Russia, Japan, Canada, and the European Space Agency), the orbiting station dominated space, but now it has competition.

The Tiangong space station is being constructed in low Earth orbit between 340 and 450 km (210 and 280 mi) above the surface. Its first module, the Tianhe (“Harmony of the Heavens”) core capsule, was launched on 29 April 2021 and two more modules are set to be launched next year.

So, how will the new station compare to the ISS?

Let’s start with the basics. How high in the sky is each space station? The ISS roams at an altitude of around 400 km (258 mi), while Tinagong will orbit between 340 and 450 km (210 and 280 mi) above the surface. So basically, the two stations do not differ much on this criteria.

When fully loaded, the Tiangong Space Station could have a mass of around 100 metric tons (220,500 lb), roughly one-fifth the mass of the ISS. Coincidentally this is around the size of the decommissioned Russian Mir space station.

Both the ISS and Tiangong use solar power to sustain themselves. The ISS’s electrical system uses photovoltaics, where solar cells directly convert sunlight to electricity. Large numbers of cells are assembled in arrays to produce high power levels, but this process sometimes builds up excess heat that can damage spacecraft equipment.

To deal with this, the ISS uses radiators – shaded from sunlight and aligned toward the cold void of deep space – to dissipate heat away from the spacecraft.

Meanwhile, Tiangong uses two steerable solar power arrays located on each module. These make use of use gallium arsenide photovoltaic cells to convert sunlight into electricity. The station also stores energy for the period when the orbiting station is no longer exposed to the sun.

At first, these two methods might sound very similar, but they do have important differences. The main one is that Tiangong uses solar arrays whereas the ISS uses “wings.” These solar array wings –often abbreviated SAW – consist of two retractable “blankets” of solar cells and are the largest ever deployed in space.

However, since the station is not always in direct sunlight, it also relies on lithium-ion batteries to see it through dark periods. These account for 35 minutes of a 90-minute orbit. The batteries are recharged when sunlight is present. Up until 2017, the ISS relied on nickel-hydrogen batteries. These were replaced from 2017 to 2021 with more effective lithium-ion ones.

The Chinese space station is currently set to have three modules (the Tianhe core module, the Wentian Laboratory Cabin Module, and the Mengtian Laboratory Cabin Module) whereas the ISS has a whopping 16 modules, with two more scheduled to be added. The ISS is made up of five Russian modules ( Zarya, Pirs, Zvezda, Poisk, and Rassvet), eight U.S. modules ( BEAM, Leonardo, Harmony, Quest, Tranquility, Unity, Cupola, and Destiny), two Japanese modules (the JEM-ELM-PS and JEM-PM) and one European module (Columbus).

The Tiangong space station is constructed around the Tianhe core module. This section is the main one and provides life support and living quarters for three crew members, as well as guidance, navigation, and orientation control for the station. This is also where the station’s power, propulsion, and life support systems are kept. It boasts three sections: living quarters, a service section, and a docking hub.

The ISS boasts very useful and efficient robotic arms and airlocks that are not present in the Chinese space station.

Tiangong is fitted with the Chinese Docking Mechanism, based on the Russian Androgynous Peripheral Attach System (APAS-89/APAS-95) system. This is used by Shenzhou spacecraft and also in previous Tiangong prototypes.

There have been claims that Tiangong’s docking system is a clone of the APAS system, which should make it compatible with the ISS’s docking system. However, others argue that the two systems are not fully compatible.

The ISS’s mission is to test spacecraft systems that will be required for long-duration missions to the Moon and Mars and Taingong’s is quite similar. The China Manned Space Agency (CMSA), who operates the space station, has listed the new space station’s purpose as:

The ISS has supported as many as 13 crew members onboard whereas the Taingong is currently equipped to handle three.

OK, it’s not fair to compare the experiments of the two stations, considering the ISS has been around for over two decades, but it should be noted that Tiangong has an ambitious experimental schedule planned. The new space station will be equipped to hold more than 20 experimental racks with enclosed, pressurized environments, and more than 1,000 experiments have been tentatively approved by CMSA.

These include experiments in space life sciences and biotechnology, microgravity fluid physics and combustion, material science in space, and fundamental physics in microgravity, all areas that the ISS’s experiments also explore.

In the end, the two space stations share more similarities than differences. They are both space stations after all. What will be interesting to see is if the Chinese space station slowly grows to be as big and as productive as the ISS. Its makers definitely have the ambition to make it so. Time will tell whether they reach this lofty goal.