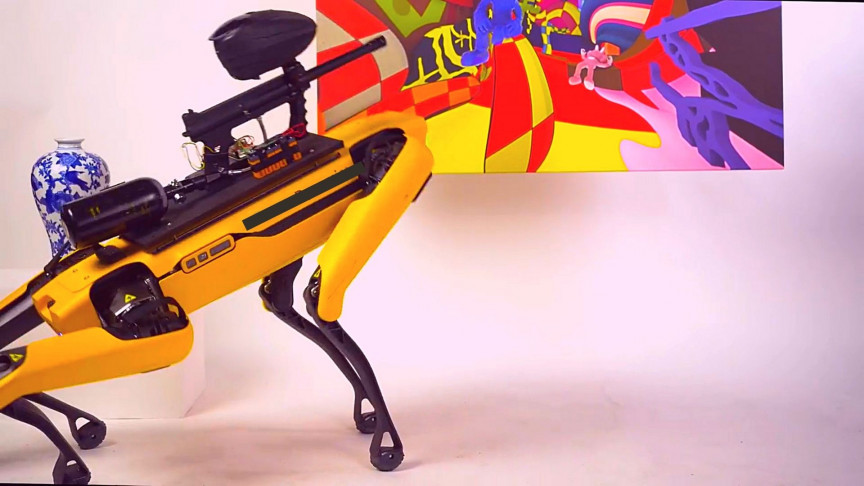 The future is scary, but more so when it comes to visit. A provocative marketing collective called MSCHF (for mischief, probably) bought one of Boston Dynamics’ robot dogs, Spot, for $74,500 — and armed it with a Tippmann 98 paintball gun.

However, MSCHF is letting people remotely control the robot with their phones in an art gallery filled with the company’s work for two minutes per turn, according to the event’s website — which is called “Spot’s Rampage,” like a sequel.

The event goes down on Feb. 24 at 1:00 PM EST, and it’s sure to make waves, but this is significant because it raises questions we don’t ask enough about the coming generation of robots. While Boston Dynamics was quick to distance itself from hints of robot violence, it’s unlikely robots will never see use to enforce systems of control.

“When killer robots come to America they will be wrapped in fur, carrying a ball. Spot is Rob Rhinehart’s ideal pet: it never shits,” read the manifesto from MSCHF’s event page.

“Good Boy, Spot! Everyone in this world takes one look at cute little Spot and knows: this thing will definitely be used by police and the military to murder people,” continued MSCHF’s manifesto. “And what do police departments have? Strong unions! Spot is employee of the month. You never need to union bust a robot — but a robot can union bust you.”

Obviously, Boston Dynamics does not endorse this message. The company behind Spot the robot dog (and a spookily choreographed holiday dance) tweeted a firm statement on the event, saying:

“Today we learned that an art group is planning a spectacle to draw attention to the provocative use of our industrial robot, Spot. To be clear, we condemn the portrayal of our technology in any way that promotes violence, harm, or intimidation,” wrote Boston Dynamics in a tweeted statement.

“[O]ur products must be used in compliance with the law, and cannot be used to harm or intimidate people or animals,” added Boston Dynamics. “Provocative art can help push useful dialogue about the role of technology in our daily lives. This art, however, fundamentally misrepresents Spot and how it is being used to benefit our daily lives.”

Robot dog doesn’t do much ‘out of the box,’ said MSCHF

And as of writing, Boston Dynamics is 100% correct — the robot dog, Spot, has only seen use as an industrial enhancement to help workers. Yet stories have only grown in number over the last several years suggesting that police departments are testing robot dogs for implementation in the field.

We aren’t saying the police will misuse the robots, but we can say that filming police encounters did not become a thing simply for the novelty.

A reporter from The Verge described their experience test-driving the robot-slash-paintball-gun, and was quick to note how the effect of MSCHF’s experiment gives a feeling of what it’s like to drive an armed robot.

“We learned shortly after getting it: everything you’ve ever seen in one of those Boston Dynamics videos is not really actually doable once you have it,” said Daniel Greenberg, head of strategy growth at MSCHF. “It really does nothing other than walk, to be totally honest.”

Future of robots is not black-and-white

Regardless, the consensus at MSCHF is that it’s disconcerting to see Spot pounce with a gun hoisted on its back. “It feels like five years from now, I could be walking around Brooklyn and just see one of those things with like a taser on it being controlled by the cops,” said Greenberg, in The Verge report.

“Who knows what the future holds?” added Greenberg.

For now, it’s very difficult to get a gun — or a paintball gun — in MSCHF’s hometown: New York City. Amazon doesn’t deliver guns of any kind, which means anyone who doesn’t have a government job (like with the police department) would have to shop creatively to buy a gun for a robot.

And supposing one day robots like Spot are put into service of police or military forces. It’s conceivable that a robot armed with weapons — lethal or not — might be hacked, and used for whatever the hacker wants, for a time. While Boston Dynamics can’t stress enough that this is not how their robot should or could be used, the future of robots — and those who might use them — is anything but black-and-white.