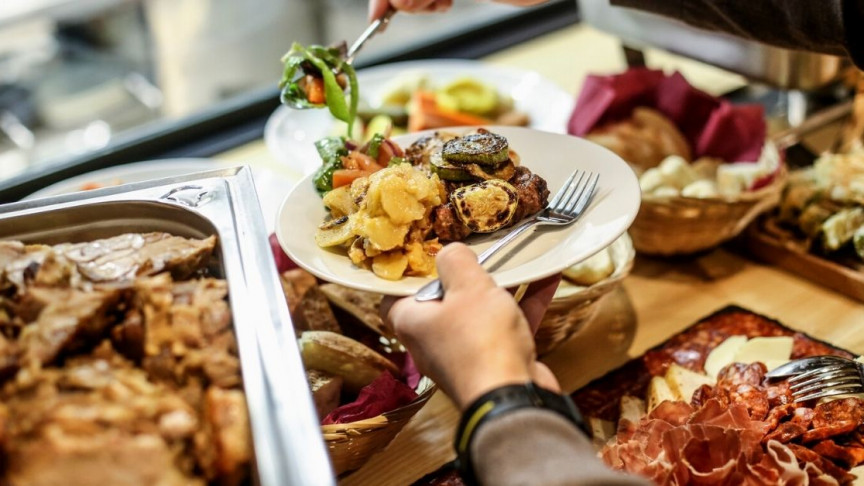 If you’ve been cooking at home more this year, you may have noticed just how much food waste we create. Even if we are careful not to waste edible food, waste like potato skins, banana peels, and apple cores pile up.

Food waste is a major problem globally. We waste or lose about a third of all the food we grow. That’s a lot of wasted resources. Wasting the land on which the food grows, the energy that is used to grow, transport, and process it, wasting water, wasting money, and wasting work. On top of it all, landfilling food waste emits the potent greenhouse gas methane, which contributes to climate change.

But a coalition of the world’s giant food companies has recently thrown its weight behind a new initiative that aims to tackle this problem. How? By preventing waste whenever possible. And by turning what can’t be prevented into renewable energy.

Earlier this month, renewables company Vanguard Renewables announced that it would be joined by Starbucks, Unilever, and Dairy Farmers of America to form the Farm Powered Strategic Alliance (FPSA), which aims to turn unavoidable food waste into renewable energy by using on-farm anaerobic digesters.

RELATED: CIRCULAR ECONOMY: WHAT IT IS AND WHY WE NEED IT?

Anaerobic digestion is no new technology; it’s been used to transform organic waste like animal manure or, indeed, food waste, into biogas for thousands of years. The process is fairly straightforward. The organic solids are placed in a closed tank (anaerobic means in the absence of air), where the carbon in organic matter decomposes into the gases methane and carbon dioxide.

This mix, which is roughly two parts methane to one part CO2, is called biogas, and can be used as fuel for heating or other purposes, very much like natural gas.

But the benefits of anaerobic digestion don’t end here. Also resulting from the process are a slurry of solids and liquids, which is called digestate and which can be used as soil enhancement to grow more food. For farmers, the ability to turn their waste into a source of energy and into biofertilizers brings evident economic advantages; it helps diversify their revenue streams and reduce their dependence on costly inputs like chemical fertilizers, which also happen to harm the soil and the environment.

Food waste in a nutshell

The reasons why we waste food are complex. They are related to how our supply chains work and with our preferences for and behavior around food. In developed countries, consumers themselves generate a large proportion of food waste. They buy more food than they need and throw away the excess. They also tend to avoid “ugly fruit” and veg that are otherwise perfectly good and tasty, and that often end up as waste as a result.

Meanwhile, in developing countries, a good deal of food is lost along the supply chain before it even reaches consumers, due to deficient transportation and storage infrastructure, barriers to or delays in producers’ access to markets, and for other reasons. And, all over the world, there are the so-called food scraps – the parts of the product we don’t consume, which result in the so-called unavoidable food waste.

Whether consumers, supply chains, or infrastructure are to blame, it’s indisputable that food waste amounts to an issue of staggering proportions. If it were a country, food waste would be the third-largest emitter of greenhouse gases in the world after the US and China. An area larger than China is needed to grow the food that we never eat. Wasted food costs us over $1 trillion per year and weighs 1.3 billion tons. And, if we could redistribute all the food that’s being wasted around the world, we could feed all the 880 million food-insecure people on our planet.

That is why organizations the world over are increasingly interested in what’s happening in our kitchens and local restaurants. The UN has set out to rally global actors behind the goal of halving food waste by 2030.

Governments around the world are increasingly asking their citizens to separate kitchen waste so it can be valorized into things like biogas and compost (mixed waste is more difficult to process). And companies, large and small, have embarked upon a crusade to nix food waste in their supply chains, cafeterias, and restaurants.

Not all the strategies to prevent food waste are created equal. Turning food scraps or manure into biogas and biofertilizer, like FPSA has set out to do, is indeed a workable solution. But, for perfectly good, edible food, the best solution to keep it at its highest value is to prevent it from being wasted in the first place.

This can be accomplished by reorganizing supply chains and markets to create less surplus in the first place, and by redistributing food before it goes bad, so that other people can eat it. Short of that, turning it into animal feed or secondary products is a second-best option, along with industrial uses that can turn food waste into oils, energy, and compost.

Incineration and landfilling are the last resort and, indeed, the most wasteful of the options because, instead of turning food waste into useful and valuable by-products, they turn it into sources of greenhouse gases.

Aside from Unilever and Starbucks, virtually every major food company is on board with the mission to tackle food waste. After all, less waste also means more profits. Nestle, for instance, has identified five key commodities that generate the most waste in its supply chains and is working with smallholder farmers and its own employees to help prevent waste. Danone has set the target of halving food waste in its operations by 2025, ahead of the UN’s 2030 deadline. Retailers like Walmart are diverting food from landfills, thanks to large-scale donation programs that resulted in the retailer donating 585 billion pounds of food to food banks in the US alone in 2019. Large catering companies like Compass Group are working with their chefs, clients, and consumers to reduce food waste across their operations. An entire range of food products designed to minimize waste, like Zenb, are becoming increasingly present on our grocery store shelves.

But perhaps the most exciting developments come from the growing community of entrepreneurs, who have embraced the cause of food waste and are working on innovative solutions to prevent it.

In 2015, Olio’s two founders set out to prevent food waste by connecting the people willing to share their food with others through a smartphone app. The app is straightforward. You enter your address and it shows you, on a map, who around you has food to share and what that consists of.

You can then connect with the person and collect the item or items they’re offering. Tessa Clarke, one of the app’s founders, said that the idea for the app came to her when she was about to move homes and had trouble finding someone to give the yogurts, sweet potatoes, and cabbage that were still left in her fridge and that she didn’t want to throw away. Since its early days, this London-based company has gone on to expand into 54 countries and has inspired a wave of similar apps looking to do the same.

Winnow, in the meantime, works very much behind the scenes, helping commercial kitchen staff understand the sources of waste in order to help them prevent it. Using artificial intelligence and machine vision, Winnow offers an effective solution to restaurants, cafes, and similar establishments.

A camera installed above the trash cans takes photos of everything that goes into the trash bin, identifies it, weighs it, and estimates its value. The startup helps commercial kitchens have an accurate picture of the composition of their waste, which is the first step in combating it.

Another creative way to valorize organic waste is by using it to grow edible insects. Black soldier flies, in particular, are a solution that numerous companies are turning to because of their incredible growth rate and their adaptability to different types of organic feed. Kenya-based company Sanergy has created a lucrative business out of black soldier flies, while also solving a serious social and public health issue in the country — poor sanitation.

Within the nine years since it was founded, Sanergy has distributed more than 2,500 toilets to 100,000 residents of Kenya’s capital Nairobi. The excrement, together with food waste from restaurants, are used to grow black soldier flies, which in turn are used as ingredients in animal feed.

Using fast-growing insects fed with “night soil” and food waste displaces the need for fish or soya as sources of protein in animal feed, thus protecting endangered fish stocks and land-based biodiversity, and avoiding the emission of greenhouse gases associated with changes in land use.

The above are only a few of the hundreds and even thousands of examples of companies that are fighting against food waste. What’s encouraging about their growing number is the fact that fighting food waste makes economic sense.

These companies are successful at attracting funding in their early stages and at turning a profit later on because avoiding food waste is actually good for business. This fills us with the hope that, eventually, we’ll find solutions to prevent food waste, while benefiting nature, people, and business.