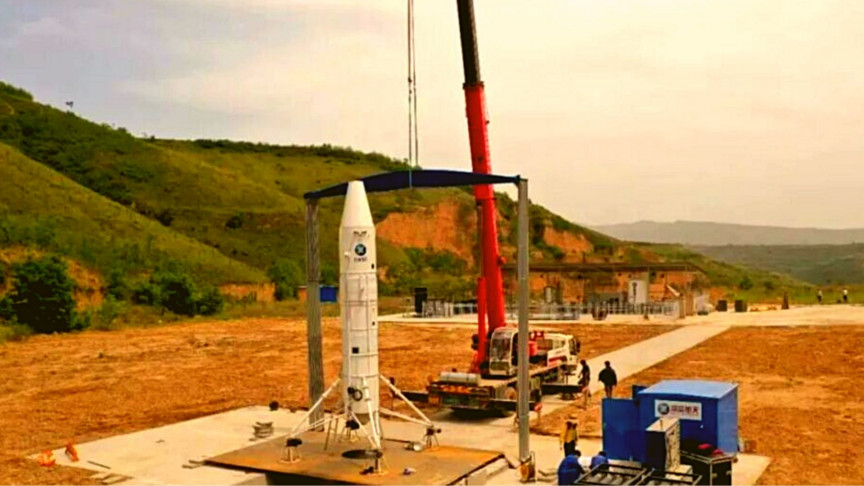 China wants to close the gap in private aerospace ventures.

And Deep Blue Aerospace, one of the newest space-hopeful firms in China, aims to achieve an orbital flight using its Nebula-1 rocket by 2023, according to an initial report from SpaceNews. And yes, it can already execute rocket reusability, much like SpaceX.

That means its first orbital flight could happen much sooner than many industry experts thought, bringing China one step closer to its western rivals.

Back in October 2021, Deep Blue Aerospace tested its Nebula-M rocket in Tongchuan, Shaanxi province. And the vehicle lifted to a height of roughly 340 ft (103.2 m) before losing its upward velocity, and it descended. Using a variable thrust Leiting-5, which is fueled with a mix of kerosene and liquid oxygen via an electric pump. Incredibly, despite bouncing and jiggling around, the firm’s Nebula-M rocket maintained its upright position, completing a successful landing.

Of course, this was barely a hop compared to the altitudes SpaceX has gone, forging the path for public-private partnerships throughout a growing number of successful crewed and uncrewed flights to the International Space Station, and beyond. But that doesn’t mean China can’t try to close Elon Musk’s lead. And it seems the CEO of Deep Blue Aerospace, Huo Liang, shared a few of Musk’s childhood interests. When he was in primary school, he built model airplanes, looked wondrously at the stars, and speculated about what humans might find in the universe, according to a SpaceNews interview.

China’s ‘military-civil’ fusion will scale rapidly in the 2020s

When the Shenzhou-5 mission was broadcast on TV, and Yang Liwei became the first person from China to reach spae, Huo felt inspired. “I hoped that one day maybe I could work in that industry and get involved in things,” he said, in the SpaceNews report. In the past, Huo worked with China’s Aerospace Science and Industry Corporation (CASIC), which works with the nation’s government to deliver space technology for defense contracts. But in 2016, Huo departed CASIC to work in the private sector, following the nation’s admittance of commercial entities into the space industry, in 2014. Dubbed a “military-civil” fusion of China’s national strategy, the policy change enabled companies to employ national technology on commercial missions.

But in the months leading up to the recent tests, Deep Blue Aerospace made two moves toward completing its Nebula-1 reusable orbital rocket: first, it executed a first and successful hop of roughly 33 ft (10 m), and then again, for a roughly 330-ft (100-meter) hop. “Technically, it is not a very big achievement compared to orbital recovery,” said Huo in the report. “That’s the height above the Karman Line recovery. But it is indeed the first step for a Chinese company and for us to reach that goal. From these tests, we have verified that the technology we chose for achieving vertical takeoff and vertical landing.”

Next for Huo and his firm will be a roughly 0.6-mile (1-km) flight toward space, testing the Nebula-M. There will be other variants of the rocket, including a larger Nebula-2M that will liftoff using Nebula-1’s Leiting-20 rocket. That one can generate 20 tons of kerolox-fueled thrust, and will aim to fly up to 62 miles (100 km) high. “Our plan is to produce the Nebula-1 liquid rocket orbital launcher as early as possible,” said Huo in the SpaceNews report. “And we will start orbital recovery simultaneously.” While China’s suite of national and private aerospace launch services can’t compare to the powerhouses of the west, like SpaceX, NASA, and the ESA, there’s ample reason to expect a rapid scale-up of China’s space industry, in the coming decade.