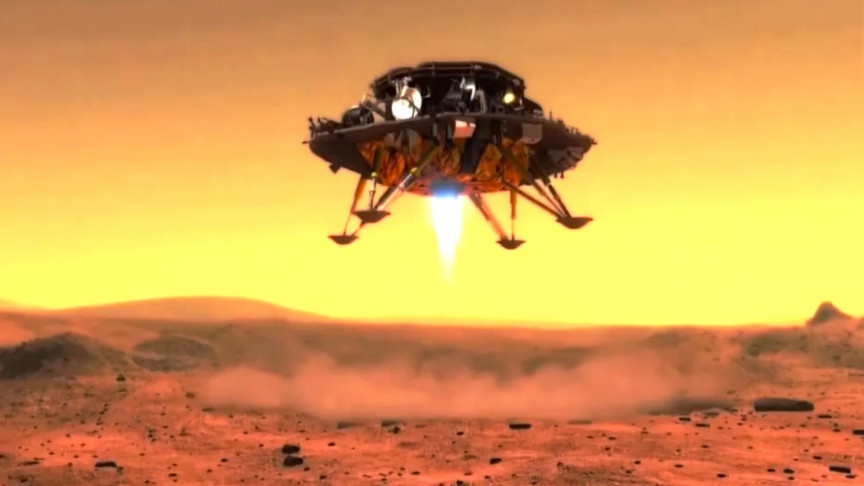 China just landed a rover on the surface of Mars for the first time, according to a tweet from China’s CGTN, an official China state-affiliated media source. This places China’s aerospace endeavors in the company of the United States and the now-defunct Soviet Union, the only other countries to successfully land a rover on the Red Planet.

The China National Space Administration (CNSA) named its rover Zhurong last month, after the god of fire in Chinese mythology, describing the choice as one representing “the Chinese name of the red planet, Huoxing, meaning planet of fire,” according to a report from a China-based news source.

The lander touched down in the Utopia Planitia region of Mars at roughly 7:11 PM EDT on Friday evening, but because of the radio delay caused by Mars’ extreme distance from Earth, confirmation of a successful landing wasn’t available until roughly 7:40 PM EDT. It wasn’t until 8:38 PM EDT that China announced its successful landing on the Martian surface to the world.

China’s Zhurong rover will study the magnetic fields of Mars

The rover spent months in orbit of Mars since it entered orbit of the Red Planet aboard China’s TIanwen-1 spacecraft, which is the country’s first all-domestic mission to the solar system’s fourth planet. While the now-defunct Soviet Union did land a rover on Mars in 1971, it only lasted a few minutes before Russian engineers lost all communication with the lander that housed the rover — which means China is the second nation to successfully operate a rover beyond the moon.

Before the rover’s landing, a Friday morning statement from the CNSA said: “According to the current flight situation, the Tianwen-1 probe [will] choose an opportunity to land on the Martian Utopia Plain from the early morning of May 15 to May 19, Beijing time.” New York City is 12 hours behind Beijing, which set the landing for May 14, at 7:11 PM EDT. “So here comes the #SevenMinutesOfTerror WIth Chinese Characteristics. Tomorrow it is,” read a tweet quoting an official at the China Academy of Space Technology named Ye Peijian.

With a successful touchdown on the Martian surface, China’s Zhurong is one of three active rovers on Mars, the other two being NASA’s Perseverance and Curiosity. The Zhurong rover’s mission involves studying the Red Planet’s magnetic field, analyzing the surface composition, investigating the weather, and more. The rover also has radar capable of detecting water lurking beneath the planet’s surface, which is another first, according to the Planetary Society, a non-profit organization.

Landing on Mars is always automated. And hard

It’s indescribably hard to land anything on Mars, especially since the entire approach, atmospheric entry, and landing have to be preprogrammed and automatically executed, since the physical distance between us and Mars is far too great for engineers to effect real-time control.

There’s more to the new space race than private aerospace companies owned by billionaires like Elon Musk’s SpaceX and Jeff Bezos’ Blue Origin. China has made great strides in recent years, in a concerted national effort to close the gap between NASA’s accomplishments and China’s space program. And in the coming years, we’re also likely to see the country extend programs to the moon, in a joint project with Russia to put a space station in lunar orbit.