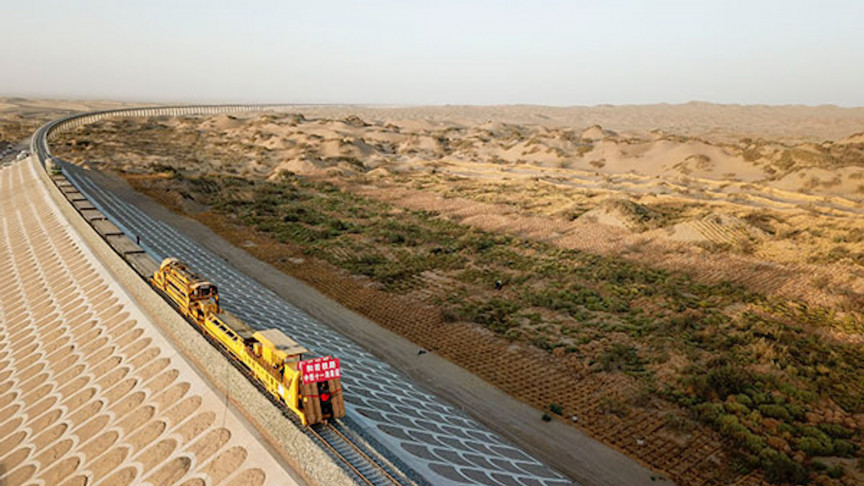 China’s government has announced it has finished laying track on a key national railway project that extends from Hotan city in Hotan prefecture to Ruoqiang county in the Bayingolin Mongolian Autonomous prefecture and stretches 512 miles (825 km), a press statement reveals.

The Taklimakan Desert is China’s largest desert and the railway loop line includes the Golmud-Korla Railway, the Kashgar-Hotan Railway, and other southern Xinjiang railways. According to Yang Baorong, chief designer of the Hotan-Ruoqiang Railway, “this railway line runs through the southern edge of the Taklimakan Desert. Sandstorms pose a serious threat to railway construction and operation as tracks can be buried.”

Due to the problem of sandstorms, anti-desertification programs were run at the same time as the line was being built. The construction project planted 13 million seedlings and fitted approximately 50 million square meters of grass grids alongside the tracks. Viaducts were also built to enable safe passage in places known for heavy sandstorms.

The new line was built to reduce travel time and speed up the economic development of the regions it is connecting. Earlier this month, a report from Railway Technology explained that China aims to invest approximately $154.88 billion into expanding the railway network in the Yangtze River Delta (YRD) between 2021-2025. The investment will expand the railway lines in the region by roughly 13,670 miles (22,000 km).

Back in 2014, China announced a massive 8,077-mile (13,000-km) US-China railway line that would cost $200 billion to build. The project would see a high-speed rail line stretch northeast from Beijing before running for 8,077 miles (13,000 km) through Siberia, and then traveling 124 miles (200 km) underwater, crossing the Bering Strait to Alaska. That project seems to have stalled, though it may still be on the backburner as China looks to vastly expand its rail network and boost its economy.