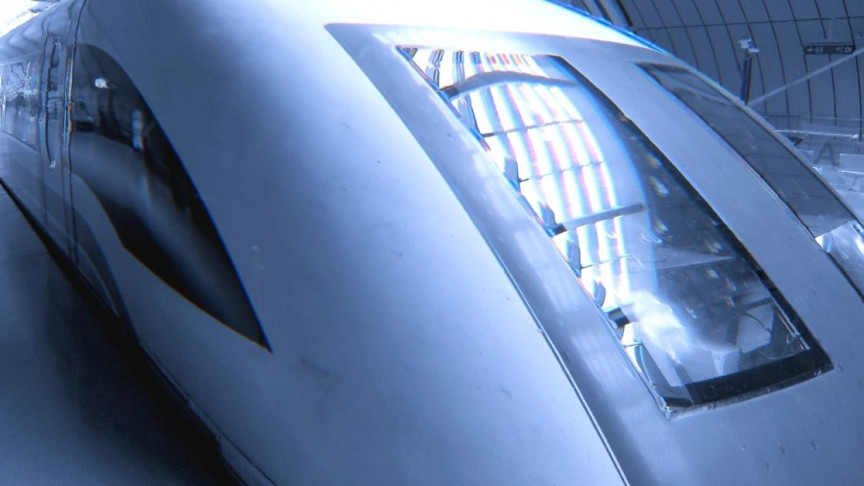 Researchers in China unveiled a prototype cutting-edge maglev train — which its developers say could foreshadow a cheaper and much faster next-gen approach to transportation, via magnetic levitation trains capable of rivaling the speed of some planes, according to an initial report from the South China Morning Post.

RELATED: RADICAL RAILWAYS: 15 TECHNOLOGIES THAT COULD DRIVE THE FUTURE OF TRAINS

The researchers are based in Southwest Jiaotong University. In the Chinese city of Chengdu, they debuted a new envelope-pushing maglev train on a 540-ft (165-m) test track.

The train was created to move at speeds up to 385 mph (620 km/h), but the researchers claimed they are pushing the maximum speed to 497 mph (800 km/h). This novel maglev is integral to Beijing’s aim to build faster infrastructural links between cities.

One alleged difference between the Chinese and Japanese train, the Chinese research team alleges, is that the latter needs to accelerate before achieving levitation, while the new one from China can levitate from a stand-still.

Naturally, maglev technology is crucial to both trains — since they make use of superconductor magnets, via which a train may levitate roughly 3.9 inches (10 cm) above the rails while magnets move the train forward.

“Liquid helium is very expensive,” Zigang said, according to SyFy Wire. “Here we achieve superconductivity at a slightly higher temperature by using liquid nitrogen — and that slash[es] the cost to one-fiftieth.”

Indeed, the price for high-speed isn’t cheap. Liquid nitrogen is estimated at roughly $38.65 million (250 million yuan) per kilometer of rail — which might drop sharply if the technology gains enough popularity to achieve wider development.

Senior Engineer of the research team behind China’s train Wu Zili said the estimated cost of constructing a new maglev line would fall between $38.65 million (250 million yuan) and $46.42 million (300 million yuan) — considerably more than the $30.95 (200 million yuan) per kilometer cost of high-speed rail.

This cost could drop if maglev lines enter the mainstream of mass public transportation.

Additionally, since maglev train cars are lighter in weight, it would cost less to build bridges. The recent Chinese prototype is composed partially of carbon fiber, and is only half the weight of the more conventional high-speed trains.

There is also an issue with the loud noise superconducting maglev trains can make. But engineers involved in maglev train development hope to reduce noise production via tweaking the aerodynamics in train and train car design. While we’re still some time from a real-world mass transit alternative at speeds approaching 400 mph, researchers are already planning to lay an experiment track with much more length — to test new maglev designs in a more real-life environment.