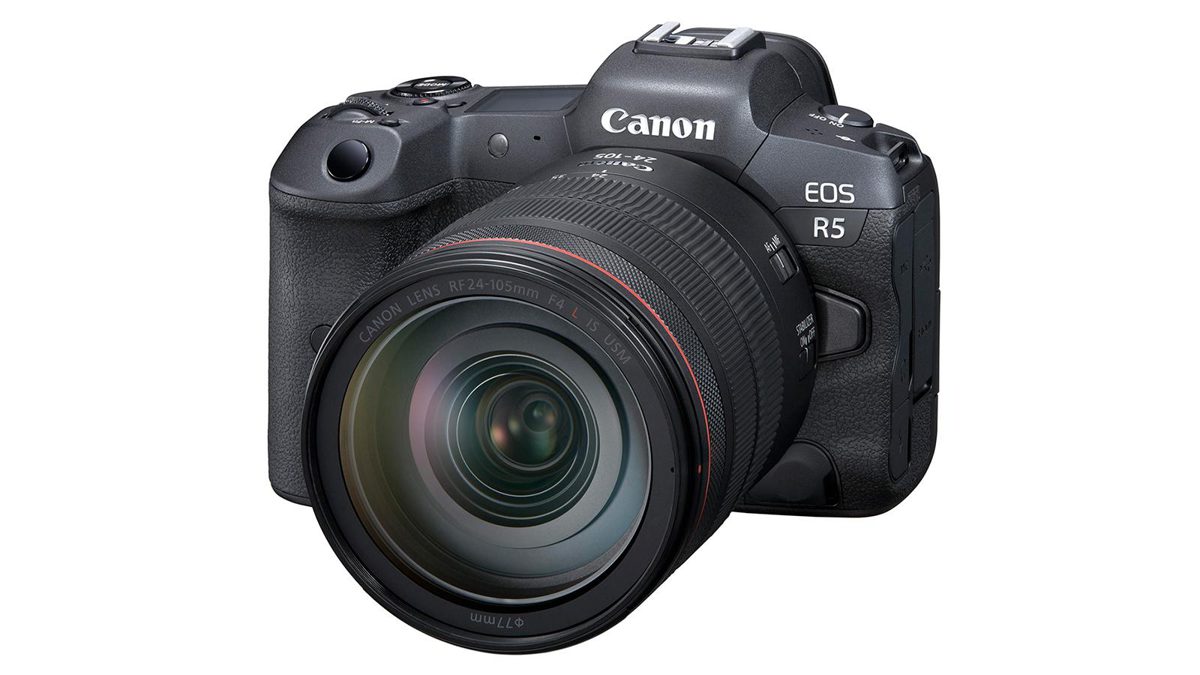 There’s a slew of new lenses too, but we’ll first turn attention to the EOS R5 and R6. The EOS R5 is the higher-end of the pair, a high-resolution model with a 45MP sensor; the R6 offers much of the same functionality, but captures the world at 20MP instead.

Canon previously teased the features of the EOS R5, but now all the cards are on the table. The full-frame camera is built around a 45MP full-frame image sensor, supports 8K Raw video capture, and, in a first from Canon, mounts its image sensor on a 5-axis stabilization system.

There are some welcome ergonomic changes versus the first-generation EOS R. The control layout is inspired by the 5D Mark IV SLR, so longtime system owners moving to away from an SLR will feel at home with an R5 in their hands. (At least in theory—I’ve only seen photos of the cameras at this point.)

A deep handgrip and angled shutter release are hallmarks of Canon design. Like its other cameras, the power switch is far away from the shutter, so you’re not in danger of powering down the camera during capture. Rear controls look good too, and now include a flat command dial and dedicated joystick for autofocus control.

The body itself is built to Canon’s pro standards. It’s just as tough as a 5D series SLR, complete with weather protection and built around a magnesium alloy chassis. The touch LCD is hinged, so it can face forward, and the EVF sports a dense 5.76 million dot resolution.

The tech inside is substantial too. The camera offers full edge-to-edge autofocus coverage and is able to track subjects at up to 12fps using its mechanical shutter and at 20fps using the electronic shutter.

It supports subject recognition, including face and eye detection for people and animals. Canon claims that its animal detection goes beyond what rivals and Nikon and Sony offer, working with birds in addition to dogs and cats.

Dual memory card slots are included. A CFexpress card is required for 8K Raw capture, and extends the Raw imaging buffer to 180 shots. The second slot is SDXC with support for UHS-II speeds—good enough for compressed footage and 87 Raw shots in one burst. Images can also be saved in HEIF or JPG format.

The 8K Raw video is a feature for headlines, but the R5 also does 4K. There are reasons to opt for lower resolution—smaller file sizes and faster frame rates are two big ones. The R5 can record 8K at up to 30fps, but it’s able to push 4K to 120fps. While Raw isn’t available at 4K, compressed footage is saved at 10-bit 4:2:2 quality and both flat and HDR profiles are included.

Not everyone needs a 45MP sensor. Canon is also introducing a 20MP model, the EOS R6. Its controls are nearly identical to the R5, and it includes all of the same autofocus, stabilization, and subject-tracking features.

The body is built on the same frame, but Canon swaps out the top information panel in favor of a mode dial. Both memory card slots are SDXC with support for UHS-II transfer, but the camera actually has a larger 240-shot buffer than the R6—a benefit of smaller file sizes.

There are some specs that aren’t quite as impressive, but are in no way deficient. Its EVF is a 3.69 million dot OLED, crisper than what you get with a Sony a7 III, and it drops support for 5GHz Wi-Fi networks—something most photographers won’t notice.

New Lenses and a Printer Too

Canon already has a pretty solid slate of RF lenses, including a trio of stabilized F2.8 zooms and a pair of F1.2 primes. It’s adding four new options today.

The most affordable is the Canon RF 85mm F2 Macro IS STM, a $599.99 prime. It’s got features that will appeal to photographers working in macro disciplines—you get 1:2 magnification and image stabilization to improve handheld results—and offers a bright f/2 aperture and focal length that should do well for portraits too. It’s set to ship in October.

For the other new entries, Canon has gone all telephoto. The RF 100-500mm F4.5-7.1 L IS USM is part of Canon’s premium L series and offers weather protection and anti-smudge protection.

Despite offering more reach than Canon’s 100-400mm SLR lens, it’s a little bit lighter, just about 3 pounds and about the same size. The focal range is a popular one for wildlife and sports photographers, who often have to hike to a location or run around the sidelines during a game.

The extenders also work with the RF 600mm F11 IS STM and RF 800mm F11 IS STM. These lenses are absolutely unique to the Canon system, marrying diffractive optics with smaller aperture and collapsing designs to net lightweight, low-cost lenses with incredible telephoto reach.

The RF 600mm F11 weighs just 2 pounds, and the RF 800mm F11 comes in at about 2.8. Both collapse for storage and telescope out for photography. They have fixed apertures—you can’t stop down—but do include stabilized optics and support autofocus.

Because they don’t gather a lot of light, use in bright light is definitely recommended. Autofocus coverage is also limited to the central area of the frame with an R6 or R5 body—about what you get with an SLR.

Along with the equipment to capture images, Canon is adding a new photo printer. The imagePrograf Pro+300 supports 13-inch paper and Canon’s Lucia fine art ink system. It’s shipping in July for $899.99.

Canon Puts the Pieces Together

With the EOS R5 and R6, Canon is reminding us why its 5D SLR series has been the gold standard for pros for more than a dozen years. It’s finally delivered mirrorless cameras that—on paper at least—look like they handle just as well as its SLR.

And it’s not just familiarity that will keep photographers tied to a system. The RF lens series is growing, but there are plenty of excellent EF lenses in use, and most are fully compatible with the R series via an adapter. Flashes, too, will just work as they do with an EOS 5D or 6D SLR.

Perhaps most importantly, Canon is not simply keeping up with the competition here. The R5 and R6 do things that competing models don’t, and finally add in-body image stabilization (IBIS), a feature that’s now expected in a full-frame mirrorless camera.

For the first couple years of its existence Canon first put the lenses its most demanding customers would want—stabilized f/2.8 zooms and modern updates to its F1.2 prime lenses—but backed it with one just-okay camera for enthusiasts and an entry-level model that wasn’t likely to be paired with high-end glass.

The R5 and R6 change the narrative. Each is suitable for pros covering events, weddings, doing portrait work, or photographing sports, wildlife, landscapes, the like. Native lenses cover the basics, and while there are still holes in the lineup, they’re not glaring, and easily filled with adapted EF options.

It’s too early for us to make a recommendation—we’ll test the new equipment to see if the reality lives up to the promise—but the EOS R system suddenly looks quite compelling.