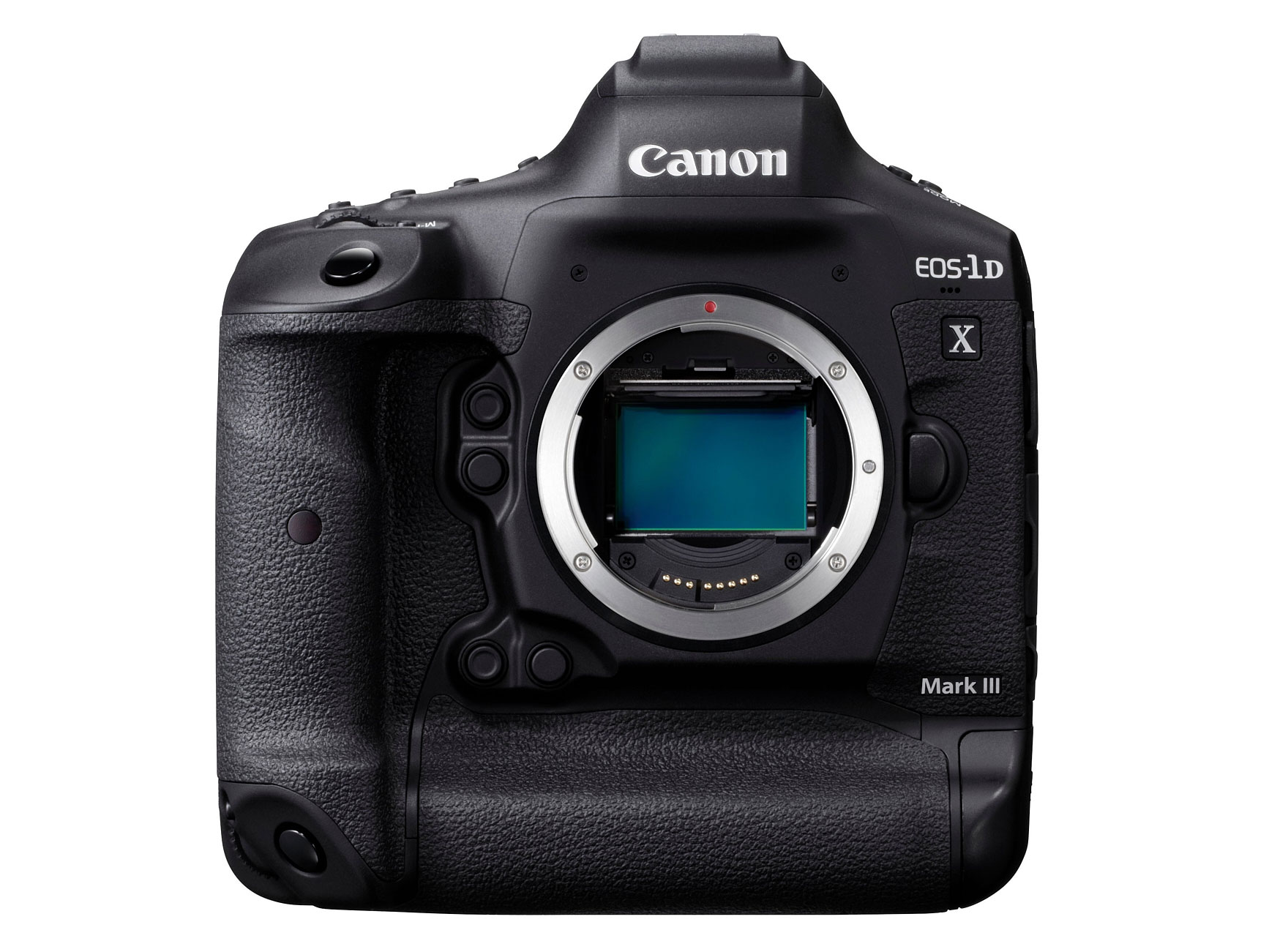 The Canon EOS-1D X Mark III is the latest version of the original EOS-1D X, Canon’s flagship in its EOS DSLR series. Like the original full-frame 1D X version (which was itself derived from the earlier APS-H size EOS-1D Mark IV), the new model is aimed at professional sports photographers and features a newly-developed 20-megapixel CMOS sensor for faster readout. Combined with a new Digic X processor, the Mark III is capable of continuous shooting at up to 16 fps using the viewfinder, or up to 20 fps in live view mode using either an electronic or mechanical shutter with AF.

Autofocus consists of a new high-resolution sensor with 191 selectable AF points (151 cross-type), accessible via the optical viewfinder that leverages “deep learning” tech for tracking heads and faces. In live view mode, the camera adopts dual pixel AF for focusing and tracking for stills and video.

With a rugged body and layout similar to previous EOS-1D X models, the Mark III has numerous back-lit buttons to aid operation in low light, and also has a new AF point controller option. This is built within the two AF-On buttons that uses an optical sensor to track thumb movement. The optical viewfinder has a high 0.76x magnification and relatively long 20mm eye relief, while to the rear there’s a 3.2″ (2.1 million dot) touchscreen LCD.

Video capture is a strong point, with the Mark III offering full-width 5.5K/60p 12-bit RAW for oversampled DCI 4K with internal recording to CFexpress cards, albeit with the AF locked. However, there are also cropped 4K/60p (UHD and DCI) options with AF and full-width Full-HD up to 120fps. The Mark III also features a Canon Log Gamma option, captured as a 10-bit HEVC/H.265 file, which is easier to grade in post-processing.

Click on the score chart above to open the Canon EOS-1D X Mark III product page.

The new Canon EOS-1D X Mark III sensor achieves a DXOMARK score of 83, which puts it at 63rd place overall in our database of full-frame and MF sensors (47th place for full-frames only). Given the sensitivity gains the manufacturer has been making of late with full-frame dual pixel AF-equipped CMOS sensors in the EOS R and Canon EOS 5D Mark IV, that’s a somewhat surprising result.

At 23.4 bits, the EOS-1D X Mark III sensor achieves a relatively strong response in our Portrait (color depth) category; in our Landscape category, it has a good maximum dynamic range of 13.4 EV measured at its lowest sensitivity setting. The sensor doesn’t perform quite so well in our Sports (low-light ISO) category, with a computed maximum 2445 ISO, based on our image quality parameters for minimum dynamic range, color depth, and SNR 18% value.

Although manufacturers have been improving sensor sensitivity in new models, it is important to keep in mind that in general, the increases in maximum dynamic range and color depth over the last few years have come from lower ISO settings.

As with previous EOS-1D models, the Canon EOS-1D Mark III has an extended ISO 50 option, but in terms of sensor dynamics, it’s really no different than the ISO 100 setting. Both ISO 50 and ISO 100 settings measured the same relatively high ISO of 136, so it’s not really surprising to see the maximum dynamic range come in a little low at 13.4 EV. That value is much the same as the outgoing Mark II, but compare that to the best-in-class Nikon D850 and Sony A7R IV at 14.8 EV. Admittedly, the Canon EOS-1D Mark III is aimed at a different segment, but the expanded ISO 50 option could in theory have been used to extend sensitivity, as is the case with the directly comparable Sony a9 II.

The same can also be said of the Mark IIIs Portrait score. A maximum color depth of 23.4 bits is good, but it’s a bit behind other sports- and action-oriented cameras such as the outgoing Nikon D5 and even its predecessor, the Canon EOS-1D X Mark II. And when compared to the best-scoring landscape and studio cameras, such as the Panasonic Lumix DC-S1R and Nikon D850, it’s some 3 bits lower at its maximum.

Even though Canon hasn’t capitalized on maximizing dynamic range at ISO 50, the Mark III’s dynamic range at high ISOs is very good and noise levels are well controlled. As a result, its Sports score of 2445 ISO is quite strong and on par with such rivals as the Nikon D5 at 2434 ISO and the Nikon D850 at 2660 ISO. Crucially, though, the Mark III is behind the newest contender to the sports-oriented segment, the Sony a9 II. With a score of 3434 ISO, the Sony has around a +0.6-stop advantage in sensor sensitivity. Canon can’t really afford to cede any ground to newcomers like Sony. 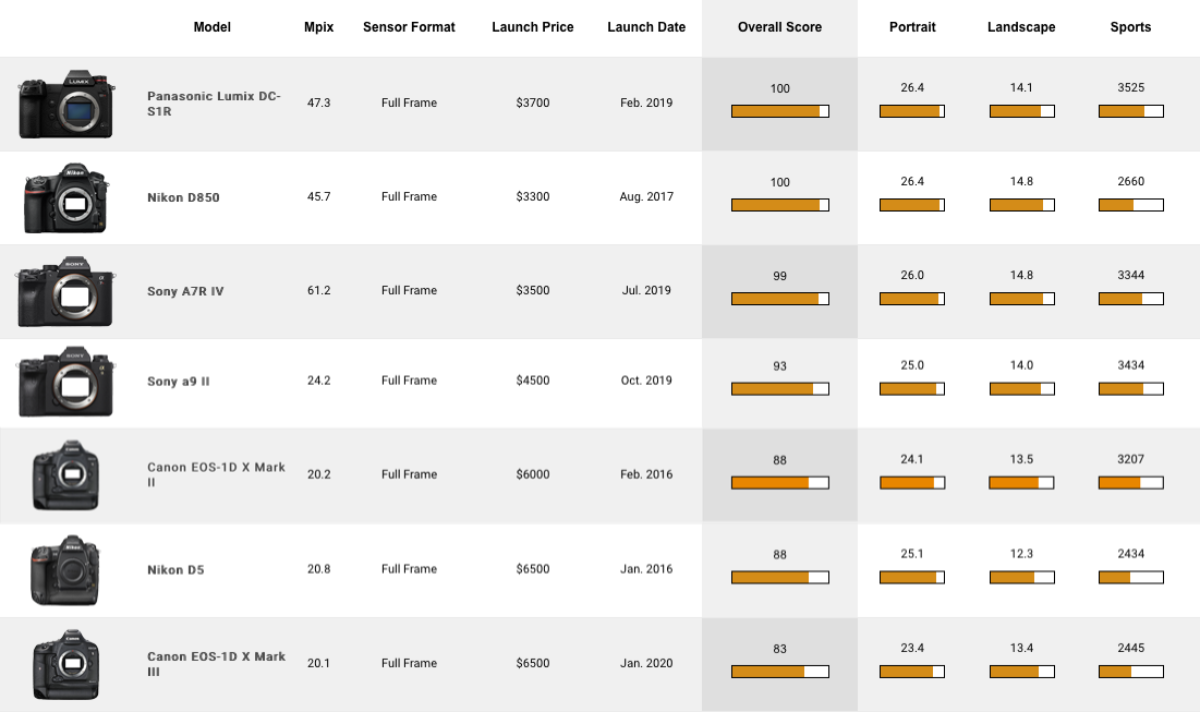 As a sports- and action-oriented model, the Canon EOS 1Dx Mark III is aimed at the same market as the Sony a9 II and the Nikon D5. (We have not yet tested the brand-new Nikon D6.) All three tested models are built for speed, so it will be interesting to see how that criterion affects sensor performance.

As we’ve already established from the headline scores, the Canon’s maximum color depth is limited by the high sensitivity at the expanded ISO 50 setting (measured at ISO 136), and this places the Mark III at an immediate disadvantage. At every other ISO setting (certainly from the maker’s ISO 800 setting and upwards), the Mark III’s sensor performance is very close to that of the Nikon D5 and the Sony a9 II.

If we compare the results on the graph, color depth naturally decreases at a steady and uniform rate against sensitivity. And while the a9 II has a slight uptick in performance at the manufacturer’s ISO 102,400 setting, the Mark III’s color sensitivity curve averages around a third of a stop lower than its rivals’ curves to ISO 12,800. But as we’ve previously hinted at, measured ISOs are considerably higher than the maker’s stated ISOs by around a stop over the D5 and the a9 II.

The Mark III dips just beneath our minimum quality threshold at the manufacturer’s ISO 12,800 setting (measured ISO 21,664); however, both the Nikon and the Sony are just inside that threshold at their respective ISO 25,600 settings (both at around ISO 9000 measured). This highlights the somewhat arbitrary nature among manufacturers’ ISO settings.

Nikon, like Sony, usually champions dynamic range at lower ISOs, but the Nikon D5 follows a similar course to the Mark III. The Nikon D5 has an identical response at ISO 50 and ISO 100 (measured at a low ISO 66) with a dynamic range at 12.3 EV. The Nikon’s flat curve over ISO 50-800 would be impressive if it weren’t for the fact that the dynamic range is around a stop lower than both rivals. Still, it goes to show that low noise doesn’t necessarily improve dynamic range.

In this instance, the Mark III’s sensor performance is superior to the Nikon’s, with improved DR and higher sensitivity up to the manufacturers’ ISO 3200 settings. Above that setting, however, the two cameras perform practically identically — although as we saw with color sensitivity, the Mark III has an advantage in dynamic range over the Nikon D5 at the two very highest ISO settings.

The Mark III controls noise levels well, but it’s really only on par with the Nikon D5, which was introduced in 2016. What’s more interesting is how it stacks up against the newer Sony a9 II (although it doesn’t use an entirely new sensor either). Against the a9II, the Mark III doesn’t quite have the same low noise levels.

The Mark III is consistently around a half-stop (0.5 EV) behind the Sony A9 II at each of our quality thresholds (excellent, good, and minimum). Maximum ISO at 30 dB maintains what we perceptually define as “acceptable” image quality (that is, a dynamic range of 9 EV and a color depth of 18 bits); the Mark III’s maximum ISO is 2445 ISO against the Sony’s 3434 ISO — a difference of just over 0.5 EV in favor of the Sony a9 II.

Sports journalism is a highly competitive field and requires a camera that can keep pace with the action unfolding in front of the lens. The Canon EOS-1D X Mark III has been designed with that one goal in mind. Although we at DXOMARK test only sensor performance and no other features, at face value it’s an incredibly fast DSLR with not only blazing AF speed, incredible continuous shooting rates and a prodigious buffer, but also an equally impressive sensor. Admittedly, it’s not quite at the cutting edge in our metrics for sensor performance, but there’s far more to it than that.

Like the Nikon D5 and the Sony a9 II, such cameras are highly specific and a niche purchase. If you’re already a Canon user with a significant investment in lenses and other dedicated system accessories, then there’s not enough difference here in sensor dynamics to get you switch brands. If you’re new to the market, there’s a lot to consider, but even then the Canon EOS-1D X Mark III is still more than a worthy contender for your hard-earned cash.

In this review, we have compared the Canon EOS-1D X Mark III to its most relevant rivals from other brands. As usual, you can create your own comparisons and in-depth analyses using our interactive image sensor ranking tool.