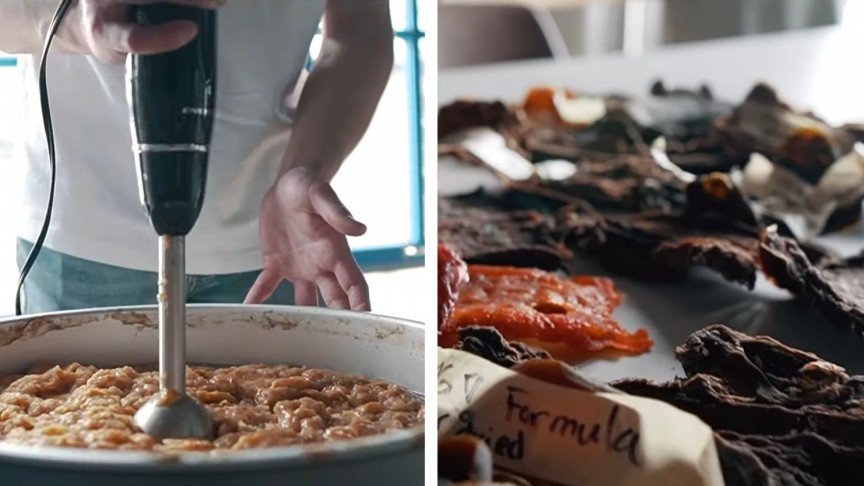 A new wood-alternative material has been invented that uses the waste products from kombucha brewing to make it. This synthetic wood can be created to mimic rare natural woods, theoretically saving the need to cut down real trees.

Other wood alternatives do exist, like the recycling of sawdust, but this material still relies, ultimately, on cutting down and processing living trees.

This incredible innovation has been rightfully recognized in this year’s James Dyson award winner. The award is “The James Dyson Award is an international design award that celebrates, encourages and inspires the next generation of design engineers.”

The new material, called Pyrus, can be formed into many different kinds of wood including mahogany or purpleheart, and many more. Pyrus was designed by Gabe Tavas, a sustainable design student at the University of Illinois at Urbana-Champaign who noticed how other designers were able to use kombucha cellulose to make things like jackets.

This is not as crazy as it might sound on the surface. Wood, after all, is basically made from cellulose with another substance called lignin that acts as a kind of glue or binder.

Kombucha cellulose is normally thrown away or used for compost

Kombucha cellulose is a slimy sheet of bacteria cellulose that forms during the brewing process of kombucha. Normally this stuff is thrown away or used as compost.

The discovery of this cellulose was music to Tavas’ ears as he had always had ambitions to design products that didn’t use fossil fuels or toxic materials while also trying to reduce human impact on the natural world.

“I started doing more research into problems like deforestation, and then it hit me that wood is mostly composed of cellulose,” Tavas explained. “Trees use cellulose to create their basic structures, so what if we got that ingredient from bacteria instead?”

To this end, Tavas began to research how he could use the material to simulate real exotic woods. Exotic woods in particular tend to be highly prized by woodworkers as they are both resilient and very beautiful. However, the demand for these woods has led to massive deforestation making the trees increasingly harder to come by.

Tavas began to grow the cellulose himself in his dorm and soon made connections with other initiatives like The Plant and a company called KombuchAid to help improve the process. The latter even began to supply Tavas with the cellulose to the order of 250 pounds (113kg) a day.

Pyrus is made by blending the cellulose and pouring it into a mold. Agar (an algae-based gel) is then added to act as a binder. This mixture is then dehydrated and placed under a mechanical press to flatten and smooth it.

This process results in a sheet of synthetic wood that can be sanded, cut, and otherwise worked with like real wood. Pyrus is also biodegradable.

At present, Tavas is using Pyrus to make small wooden items like guitar picks and jewelry. However, he hopes to be able to scale the technology in the future to potentially 3D print the cellulose into bigger objects that would be difficult to make out of a sheet of the material.

The prize money of $2,600 from the James Dyson award will be used, according to Tavas, to expand his operation and help develop the 3D printing process.