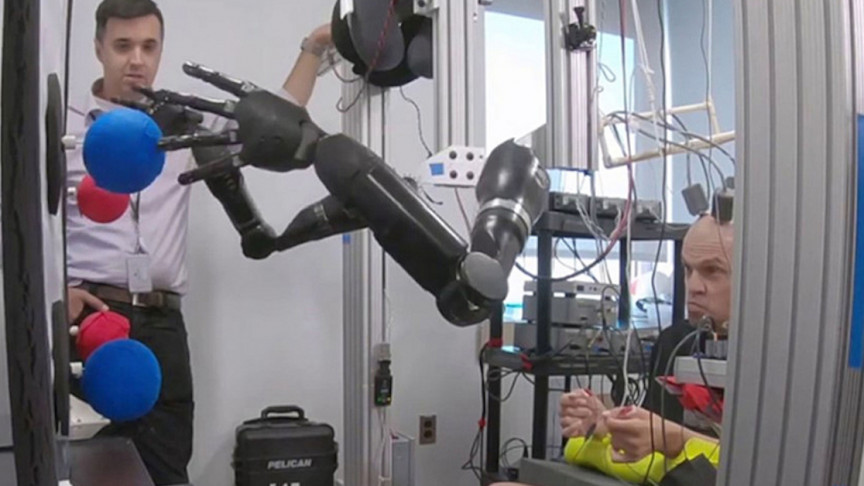 A quadriplegic man was able to control a pair of prosthetic arms simultaneously, thanks to technology from Johns Hopkins University, in what is believed to be a medical first.

The result is that Chmielewski gained improved sensation in his hands and was able to mentally operate his prosthetic arms, a Johns Hopkins Medicine press release explains.

RELATED: NEW SELF-AWARE ROBOTIC ARM CAN RECOGNIZE AND REPAIR ITSELF

Over three decades, Chmielewski was paralyzed following a surfing accident, which left him with only minimal movement in his extremities.

Now, almost two years into the collaboration between JHM and APL, Chmielewski is able to use both of his robotic arms to perform simple tasks such as feeding himself.

“This type of research, known as brain-computer interface (BCI), has, for the most part, focused on only one arm, controlled from only one side of the brain,” says Pablo Celnik, M.D., director of physical medicine and rehabilitation at JHM and a member of the research team.

“Simultaneous brain-machine interface control of two limbs is a particular challenge because it’s not a simple 1+1 summation of what the left arm is doing plus what the right arm is doing in the brain, but more like trying to calculate the sum of the two arms as 1 plus 1 equals 3.8,” adds Gabriela Cantarero, Ph.D., assistant professor of physical medicine and rehabilitation at the Johns Hopkins University School of Medicine and a member of the research team.

The researchers’ technology uses a system that automates part of the robotic control using artificial intelligence (AI). The goal was to combine brain-computer interface signals with robotics and AI to allow the user to focus on the details, such as what object to pick up, where to cut a piece of food, etc., while essentially letting the AI take control once the decision is made.

“Our next steps for this work include expanding the number and types of activities of daily living that we can demonstrate with this form of human-machine teaming, as well as providing users with additional sensory feedback as tasks are conducted,” says Francesco Tenore, Ph.D., an electrical engineer at APL and a member of the research team.

“This means that the user won’t have to rely entirely on vision to know if he’s succeeding, in the same way that uninjured people can ‘feel’ how they’re tying their shoelaces without having to look,” Tenore continued.

The video below, from October 21 this year, shows Chmielewski cutting food with his left hand and feeding himself with the right. Both of the robot arms move simultaneously in sections of the video.