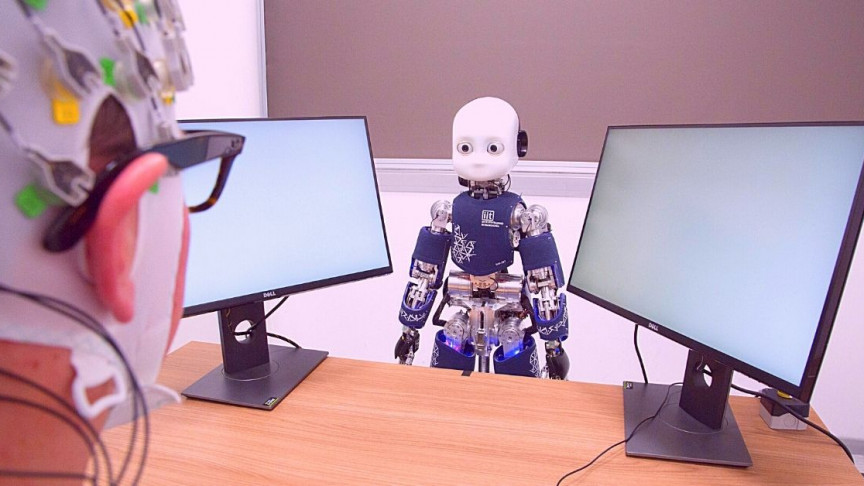 Researchers have shown how people’s bias toward robots — specifically, when attributing intentionality or disregarding them as “mindless” things — is clearly correlated with distinct patterns in brain activity, according to a new report published in the journal Science Robotics.

RELATED: HOW CLOSE WE ARE TO FULLY SELF-SUFFICIENT ARTIFICIAL INTELLIGENCE

The way we react to robots endowed with artificial intelligence (AI) — like humanoid robots — depends on personal attitudes scientists can detect within individual neural activity, reports TechXplore. The new study comes from researchers at IIT-Istituto Italiano di Tecnologia (the Italian Institute of Technology), and confirmed that personal bias toward robots — humanizing or the opposite — shows up in brain activity patterns.

This research is significant because it will help teach everyone how humans engage with robots, while also taking the temperature of the public’s future reaction to AI and humanoid robots in both healthcare applications and daily life.

The threshold of disbelief about robot intentionality

Coordinated under the stewardship of Agnieszka Wykowska, who focuses on the study of human social cognition while interacting with artificial agents — especially humanoid robots. Wykowska’s research investigates possible uses for humanoid robots in the healthcare sector, and develops robot-assisted training protocols for people with autism and other disorders affecting social behavior.

In 2016, Wykowska received funding to investigate what conditions constitute the threshold at which humans consider robots to be intentional beings — referring to people who think about robots in terms of mental states, like beliefs, dreams, and desires, instead of ones and zeros.

Humanizing robots is a neural event

Humanoid robots are a distinct category because — while they resemble humans — they also provoke a human tendency to relate to them as intentional, agency-bearing beings. But everyone knows robots are artifacts, which is why many believe we should never treat them as if they aren’t.

In an earlier study, Wykowska and her research group noticed how people vary in their capacity or likelihood to regard robots as real, mind-possessing beings. The recent study shows how the people who give the benefit of post-mechanical agency to humanoid robots display specific brain activity — which is measured via electroencephalogram (EEG) — establishing a quantitative means of measuring human bias when attributing intentionality to robots like the IIT’s iCub.

“Our findings are fascinating, as they show that it is possible to bridge the gap between a high-level philosophical concept and neuroscience data, namely that attitudes toward technology can be linked to distinct brain activity patterns,” said Wykowska, TechXplore reports. “This study shows that people might have various attitudes, such anthropomorphizing robots to various extent, and those attitudes can actually be detected at the neural level.”

When the brain is at rest, there is a specific pattern of neural activity in the beta frequency range detected in the EEG signal, and it predicts people’s bias toward regarding the iCub humanoid robot with intentionality. They also noticed differences in brain activity when study participants cross the threshold of interpreting iCub’s behaviors as either intentional or purely mechanistic.

Beyond the advancement of basic research into human interaction with AI and humanoid robots, it’s interesting to note how the future of humans’ acceptance (or rejection) of robots in healthcare or ordinary environments is becoming a known factor.